Why SearchResearch skills matter in education

Dan Russell • June 17, 2016
SearchReSearch
Republished with permission from SearchReSearch
Why SearchResearch skills matter in education Dan Russell
There’s always been a gap between

...those who know how to use information resources and those who don’t. Students who knew the ways to leverage a library for research could consistently do better research than those who couldn’t. That's not a surprise. 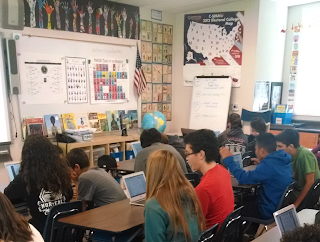 But this gap is turning into a vast chasm of difference.

Students who know how to use online resources efficiently and effectively will be able to massively outperform students who don’t.

This is a qualitative change from the days of paper-based libraries and information resources. Then, doing research was largely limited to what you could reach out and touch by hand. Now, it’s possible for students to do research on information that scattered across the entire planet; and they’re not limited just to finding text in documents, but can find original archival images, movies, code fragments, transcripts of trials, books, magazines, and sounds.

Here’s my favorite example of this change.

In the 1990s I used to teach AI algorithms to my graduate students in Computer Science as a way to help them understand the inner workings of Artificial Intelligence. If you can write a program to do some task better than a human can do it, then you’re well on the way to understanding how this algorithm operates and in the process, you’d learn something about the nature of intelligence.

I taught this class this for over 10 years—handing out the assignment one week, and then expect the homework to be done three or four weeks later after we’d covered the material, discussed how things worked, and let them write, debug, and explore the code.

And then, in the early 2000’s, I noticed that my students were suddenly turning in their assignments weeks ahead of schedule.

What? Weeks ahead of the syllabus? That didn’t seem possible, until I asked around and found that they were just Googling for the code, finding that someone else had written it already, modifying it slightly, and then turning it in as their solution.

This was the leading edge of a huge shift in the way people program, and more importantly, in the way students did their work.

That was a few years ago, but it set the stage for what’s happening now.

It was never great educational philosophy to just shovel facts to a student and then ask them to pick the right one from the set of options, but now, with search engines and a galaxy of online content available in milliseconds, it’s a truly terrible idea. Students who are good researchers can find information on a topic faster than you can push it to them.

This is as true in the elementary grades as it is in graduate school. We all know sixth graders who can (with the aid of their phone and a quick search) name all of the signers of the Constitution in less than 10 seconds.

Suddenly, what it means to know something has profoundly changed. There’s a difference between knowing, and knowing how-to-search.

There’s a difference between knowing that something exists, being able to find it rapidly with a moment’s worth of research, and then being able to pull together multiple sources of information into a coherent analysis.

In particular, the research skills gap is growing. Students (and teachers, and for that matter, employees) who are able to do rapid and accurate research on a topic have a substantial advantage in getting things done and deepening their understanding.

What’s more, there’s an unexpected second-order effect: those that have developed and sharpened their research skills can grow those research skills over time, increasingly widening the gap from their peers who haven’t mastered that self-teaching nuance. Having research skills isn’t just an optional part of your education—they’re essential. Especially once you know how to do the research to upgrade your research skills.

It’s important to realize that there is a fundamental change going on in what it means to learn. We know that memorizing the US presidents in election order isn’t really a useful skill for most students. It’s rare that anytime after high school that you’ll be asked if Chester Arthur was before, or after, James Garfield.

It’s even less likely that you’ll be asked how many US presidents were in the Whig party. But it takes a student about 5 seconds to find the number. (I timed my students doing this. It does take around 5 seconds, limited mostly by typing speed. Their answer? There were four, the first was William Harrison, and the last was Millard Fillmore. There's a handy list of US Whig presidents available online.)

But if you don’t know the names of the presidents, if you have never studied them as a group, in a sequence, possibly with their party affiliations, then you probably won’t recognize the name of Millard Fillmore as a Whig president, but perhaps only as the name of a trivia hunt game.

The very nature of what it means to know is shifting our understanding of teaching, and what’s important for our students to command.

Students still need to know about presidents, their policies, and the role they play in the history of the nation.

For example, Fillmore wasn’t elected president, but assumed the presidency when Zachary Taylor died in office. His attitudes about slavery influenced the course of the Civil War.

Students still need to know these kinds of things, and is possible that learning the sequence of presidential elections is a good way to introduce those ideas.

But even more, they need to know how to find out more about a topic in a way that is efficient and accurate. They need to command the key topic ideas, recognize the presidents, their policies, and their parties. They need to cultivate the trait of curiosity that will let them keep reading beyond Millard Fillmore, and learn about Zachary Taylor, and why Taylor setup Fillmore, and why that affected the US Civil War.

Most importantly, they need to be able to answer the entire range of questions that will come up... and for the most part, that will require the skills of SearchResearch skills, and a drive to be curious about the world.