Update on the Danish optical device

that might have been found in a Danish opticians office past Elin over the weekend. Here is the one that she said seemed most-like the one she remembered. This is a keratometer from the 1950s. 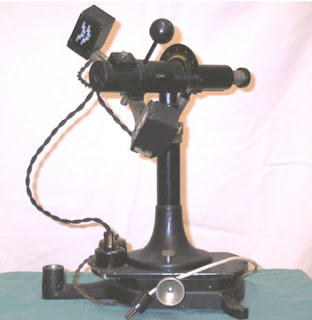 In particular, it was a monocular device. The biggest difference is that Elin recalls seeing blue and red rings, a bit like the duochrome test.

One optometrist's page tells us that the duochrome test is often red-green, but that blue may be substituted for green on occasion. That same page also tells us that circles are sometimes used in the test, and they're called Verhoeff's Circles.

Don't know if this will solve the Challenge or not, but I thought I should give you this additional clue!