Update: More about the Farallons — "What IS that below?"

Dan Russell • January 8, 2017
SearchReSearch
Republished with permission from SearchReSearch
Update: More about the Farallons — "What IS that below?" Dan Russell
A while ago we had a...

post about whether or not one could see the Farallon Islands from the shore (they're 27 miles to the west off the coast from San Francisco)...

We answered that yes, you could see them, but your eyes would have to be 489 feet in the air.

It turns out that this is the height you'd need to be to see the islands at sea level.

In other words, if you wanted to look at the waves crashing on the shores of the Farallons, you'd need to be 489 feet up. That was what we calculated, and it's still correct.

It just so happened that I went to San Francisco a week ago, and I went to check this out.

Surprise! I learned something.

The Farallons are mountainous islands; they stick up out of the water by quite a bit! Our calculations didn't take that into account!

From my car in the parking lot at Sutro Baths, around 250 feet (76 meters) high, I took the following photo. 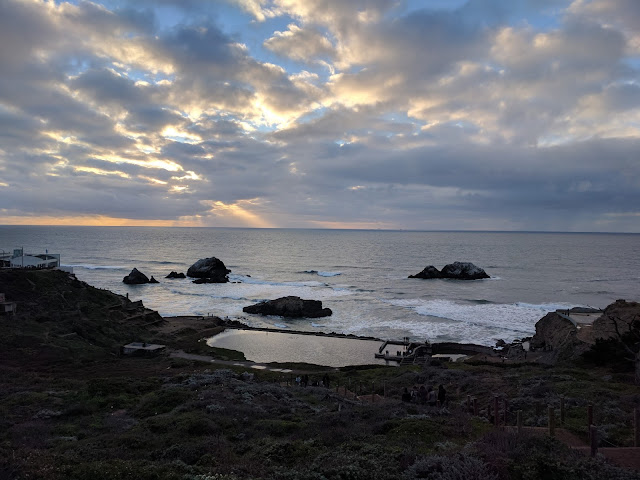 I was happily surprised to see the Farallons on the horizon. Fantastic!

Here's a zoom on this image: 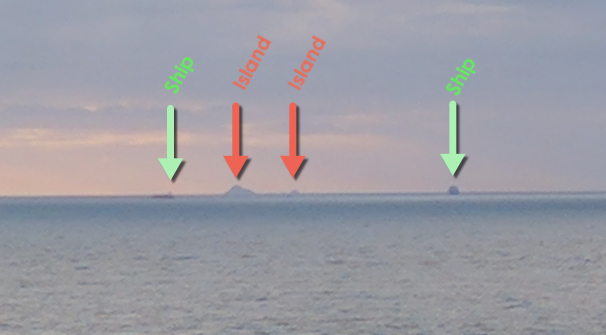 As you can see, SEFI is clearly visible, as are Aulone Island and the Great Arch Rock (which blur together in this image). You can barely see a ripple of the islands between them. Here's the satellite image from Google Maps.


And here's the 3D view on Google Maps, as seen from the parking lot (very near where I was standing). 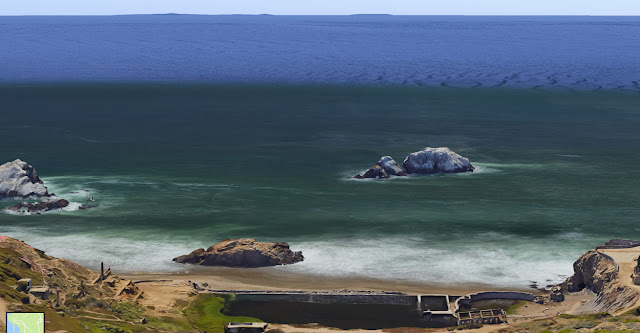 I have to admit being a bit surprised. Yes, they're clearly visible, but I didn't think they would be visible from the parking lot--it's only 250 feet up.

But I'd forgotten that the calculation we made was to the island at sea level, and not to the top (or middle) of the island.

This is yet another reminder that:

A. It's really worth checking ground truth every so often. Because...

B. You find out more about what the question REALLY is all about, and not just what you might think it is.

I learned something really useful here. When you're making basic geometrical calculations, it's handy to really look at your diagram to see if it represents what you think it does. 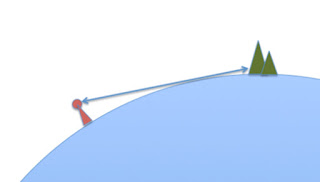 If I would have looked at my own diagram, I would have realized that I was calculating the angle to the tangent. The reality is more like this: 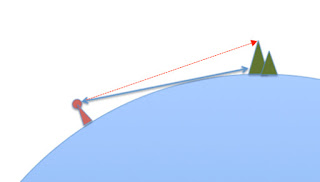 When I took the photo, I was only at 250 feet high... but the islands stand another 375 feet high out of the water!

I will leave the calculation of how much of the island you can see to the interested reader. (It's not hard, given what's in the earlier post.)

As your grade school math teacher probably told you: "Check your work!"

Happy to find an error (and correct it)!