The Baader-Meinhof effect and flying over the southwest United States

... aka the Baader-Meinhof effect, happens when you learn something new, and then suddenly start to see it everywhere. This happens when you finally decide to buy a new car and after weeks of agonizing, you finally pick that very special one, the very distinctive car that speaks to only you. You're so happy.

And then you start to see that car everywhere. It's not distinctive at all, but actually pretty common.

That's the Baader-Meinhof effect. It happens because you don't notice all of the cars that are just like it before you made the choice--it's an illusion of the frequency of the item.

It also happens with words. If I use the term whale shark and you learn that as a new concept, suddenly you'll see it everywhere. Trust me, you'll start to see whale shark everywhere now.

So when Regular Reader Ramón wrote it with a Washington Post article, it was a nice example of this effect. He found a real, live example of our Challenge from last week: How can I make a movie of my flight? In that post, I show you how to make a video by using Google Earth to capture a flight path.

Ramón noticed that the Post article "Flying over Trump's wall" used the exact same technique (although they did some great post-production video editing). In an early part of the fly-over, it looks like this: 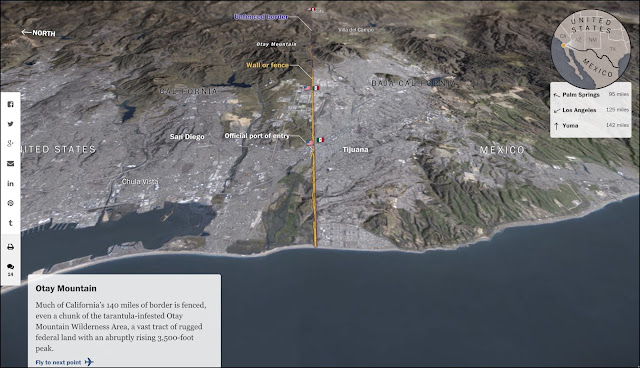 Thanks for the find, Ramón! Now we all know how this brilliant piece of visualization was created.

Search (and visualize) on!