SearchResearch Challenge CONTINUED AGAIN! (Can you build an interactive widget for the island viewing problem?)

Dan Russell • April 26, 2017
SearchReSearch
Republished with permission from SearchReSearch
SearchResearch Challenge CONTINUED AGAIN! (Can you build an interactive widget for the island viewing problem?) Dan Russell
Since there's so much interest...

... and since we seem to be making progress (see the comments in the last two posts), I'm going to continue this Challenge until next week. My answer / analysis will be posted on Monday, May 1st.

Remember that the SearchResearch Challenge this week is to figure out how to make an interactive widget that can interactively show the relationship between height and visible distance in the "island viewing" problem. That is:

1. Can you make an interactive widget that illustrates "how far out to sea can you see" without going into full-developer mode and writing a bunch of HTML, CSS, and Javascript?

The comments from the last week have been pretty helpful, but nobody's got a solution yet. It's possible that there isn't a good solution (that is, without going fully into HTML/Javascript), but we're tantalizingly close!

----- I'm repeating the statement of what the widget should look like below...

To get you started, here's a side-by-side sketch of what such a widget might look like. In the first image, the observer's eye is 1.7 meters above the beach, which lets the observer see 4.7 km out to the visible horizon. 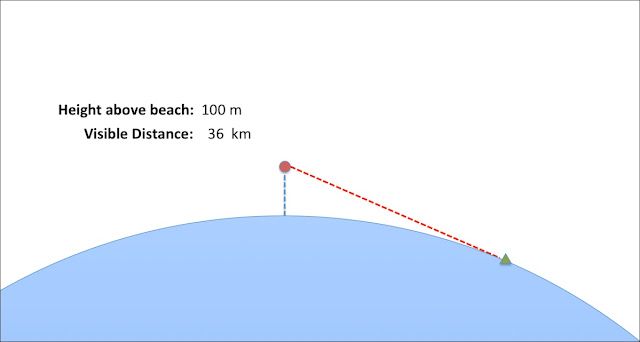 The interaction is simple: As you drag the red dot up, the value of the "height above the beach" changes. In this image, it's 100m. You can drag it down to 0, or up to a much higher number. As you drag, the widget updates the "visible distance" number as you drag, and redraws the red line to touch a point on the circle (in this case, one that is 36 km out).
In this next image, I've dragged it down a bit. Here it's just 1.7 meters above the beach, and the red dotted line only goes out 4.7 km. As I drag the dot, the numbers should update, the line to the dot should move up and down, and the line to the point on the circumference of the circle should slide along to show the distance. 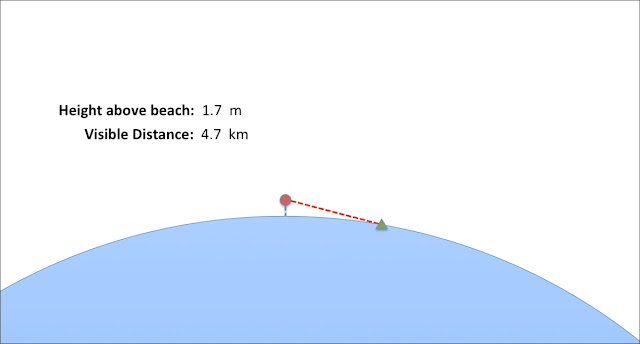 This post was republished. Comments can be viewed and shared via the original site.
23 comments