Floods come in all sizes...

But this week we're interested in the biggest floods that have reshaped the land at large.

What can we learn about such events? Here's the Challenge from 2 weeks ago:

1. Can you find the 3 largest floods of all time? What are they? We're not counting life or property loss here, we're just interested in size--especially total water movement. Hint: they all have to do with geology rather than human-made causes.

2. What causes these gigantic floods? That is, how would such things occur? What's the underlying root causes?

3. Where are the biggest risks of giant floods today? Sure, every dam in the world can cause flooding, but are there other places that might have a giant flood today? Where? And how bad are the risks?

Like several of our SRS Regulars, I started with the simplest query:

The first result is a Wikipedia result, "List of deadliest floods," interesting, but not quite what I wanted.

The next few results are all giant floods within the past few years, mostly historic, but again, not what I'm looking for. The loss of life and property is tragic, but off-topic. Even the largest historic floods (such as the 1931 floods in China, which flooded huge areas of China, killing somewhere between 400K and 4M people) aren't on the scale we seek.

Fortunately, about 12 results down I found the USGS PDF "The World's Largest Floods Past and Present: Their causes and magnitudes."

The USGS has a great reputation for being an authoritative source of geological (and in this case, hydrological) information. This report covers the biggest of the biggest floods going back 2.5 million years, that is, it covers floods during the Quaternary Period, which goes from today back to 2.5M years ago.

This chart summarizes the biggest floods of the Quaternary Period:

When you read the report, you'll see that the biggest ones are due to ice-dam failures.

The largest (by reasonable estimates) was the Kuray flood in Altair, Russia. Near the end of the last glacial period, 12,000 to 15,000 years ago (late Pleistocene), glaciers coming down from the Altai mountains dammed the Chuya River. This created a large glacial lake backing up into two large watershed basins. As the lake grew larger and deeper, the ice dam eventually failed, causing a catastrophic flood that spilled along the Katun River. At peak flood, the Kuray (aka Altai Flood) is estimated to have spilled around 18M cubic meters / second. (For contrast, Niagara Falls runs at 2800 cubic meters / second, 0.01% of the flood volume.)

In North America, the largest Quaternary Period flood was the Missoula flood at 17M cubic meters/second. It formed behind the Cordilleran Ice Sheet margin in the western US. When the ice dam broke, it made giant floods along the margins of the Laurentide Ice Sheet in eastern and central North America. These large ice-age floods involved tremendous volumes of water, enough that their rapid discharge into the oceans may have affected oceanic circulation, and even affected global climate. Repeated failure of the ice dam released the backed-up glacial Lake Missoula, repeatedly causing dozens of catastrophic floods in eastern Washington state. They can be seen in the geologic record as they removed tens of meters of pale loess from dark basalt substrate, forming scars along flowpaths visible from space.

But as I read that report, I found this intriguing sentence:

"Geologic records also document tremendous marine floods into tectonically closed basins. The largest known example is the flooding of the Mediterranean Basin through a breach developed at the Straits of Gibraltar—an event now recognized to have caused the faunal upheaval used by early geologist Charles Lyell to divide the Miocene and Pliocene Epochs."

A quick search for:

led me to even LARGER floods!

Why were they not included in this paper? Because if you remember, the USGS report covers only the Quaternary Period. That is, from today back to 2.5M years ago.

Here's a chart for reference. The USGS paper only covers the Quaternary (that is, the Holocene and the Pleistocene). 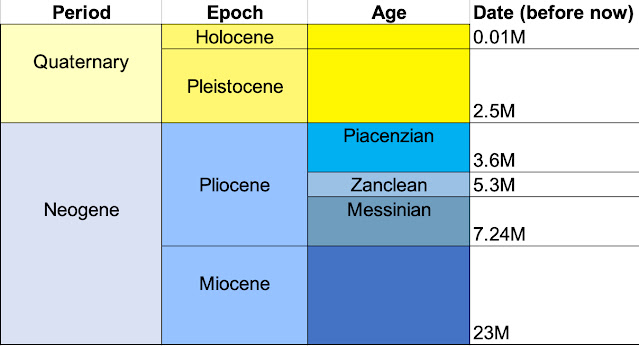 Digging into some of the results of that search tell us that before 5.3M years ago, today's Mediterranean was a huge basin with hyper-salty water. (Ready all about the Messinian Salinity Crisis, which tells us that the Mediterranean Sea went into a cycle of partial or nearly complete drying-up throughout the latter part of the Messinian age, from 5.96 to 5.33 million years ago. The Salinity Crisis ended with the Zanclean flood, when the Atlantic reclaimed the basin by pouring through the Straits of Gibraltar.

How big was that flood? A paper in Earth Science Reviews (The Zanclean megaflood of the Mediterranean – Searching for independent evidence) tells us that there's a good deal of evidence for this megaflood, including

"...Numerical model predictions show that sand deposits found at the Miocene/Pliocene (M/P) boundary in [several] sites... are consistent with suspension transport from the Strait of Gibraltar during a flooding event at a peak water discharge of around 1B cubic meters/second."

That's astounding! It's so remarkable that I (following our usual guidelines to double/triple check things that amaze you) searched for a few more articles on the Zanclean flood.

This time I used the new terms I picked up in my reading megafloods and outburst flood. That led me to search for:

Just for completeness, I also did a search for:

Which took me to the Wikipedia list List of Megafloods, which includes the Zanclean flood and a few others that I didn't know about. (All of which were smaller than Zanclean.)

What about risks of large-scale floods today?

Using that speciality term, megaflood, I did a search for:

which led to a number of articles about the risk for large-scale floods in the US. (The results will vary a bit depending on where you're located when you do the search. If you're in Iceland, you'll get more localized results. The same is true for other places.)

The most worrisome article was one from Scientific American, California Megaflood: Lessons from a Forgotten Catastrophe which points out that while California is currently drought-stricken, it's not impossible for another 43-day storm (like the one that began in December 1861 that dropped 2 meters of rain) could put central and southern California underwater for up to six months. We need water, just not that much water THAT quickly.

The largest known floods of the past 1.5M years had peak discharges of nearly 20 million cubic meters/second and were caused by breaches of glacial-age ice dams that blocked large midcontinent drainage systems.

Most of the other largest documented floods resulted from breaches of other types of natural dams (such as landslide dams, ice dams of smaller glaciers, releases from caldera lakes, and ice-jam floods).

Surprisingly, only 4 of the 27 largest documented floods were the result of meteorological conditions and atmospheric water sources. But unsurprisingly, the biggest risk of contemporary megafloods is due to concentrated rainfall in increasingly urban areas, much as we have seen in recent flooding events in New Jersey (from Hurricane Ida), in Henan, China, and in Europe this past summer.

But for the LARGEST floods of all time, we have to include the Zanclean Flood and the ice dam floods like the Kuray flood and Missoula floods that left dramatic marks on the geography of the area.

There are 4 highlights from this week's Challenge:

1. Rapidly skip irrelevant results. Several of these queries bring up amazing stories and remarkable events. But stay focused on what you're seeking. (If you want, take a note to come back later--but when you're working on a deadline, be sure to keep your eyes on the prize.)

2. Remember the scope of your source material. When were reading that great USGS paper about "largest floods," we had to remember that it only covered the Quaternary floods... and there were even bigger floods before that epoch. Take note of the limits of what you read--you might be accidentally excluding information that is really what you want!

3. Triple check your amazing discoveries. This is general advice worth remembering. Every time I found "the biggest X" or the "largest Y," I'd go look for at least 2 more citations that would confirm (or disagree!) with what I'd just found.

4. Use specialty terms you learn along the way (e.g., megaflood). Often when you start searching in an area that you don't know well, you'll pick up on specific terms that help you in subsequent searches. "Megaflood" was a great search term--it's unusual enough to be very specific and incredibly useful. Note these as you do your reading, and your searching will improve!