Yes, this is SearchResearch post #1000. Remarkably enough, we've been talking about search, sensemaking, and how to be better at this for just over 7 years, since January 31, 2010. In that first post, I wrote about a method for monitoring a web page on a topic. (Of course, the method I describe there no longer works as written... which is why this blog has been ongoing for so long!)

In my next post, I'll write a bit about the process of writing SRS, and where it's going. There may be a thousand posts under our collective belts, but there's still so much more to do!

Onward... to this week's Challenge...

Last week I was in Cancun, Mexico, attending a friend's wedding, enjoying the beaches, and (naturally) slipping in a quick dive trip on the side.

This is a picture from our dive at one of the Dos Ojos cenotes. 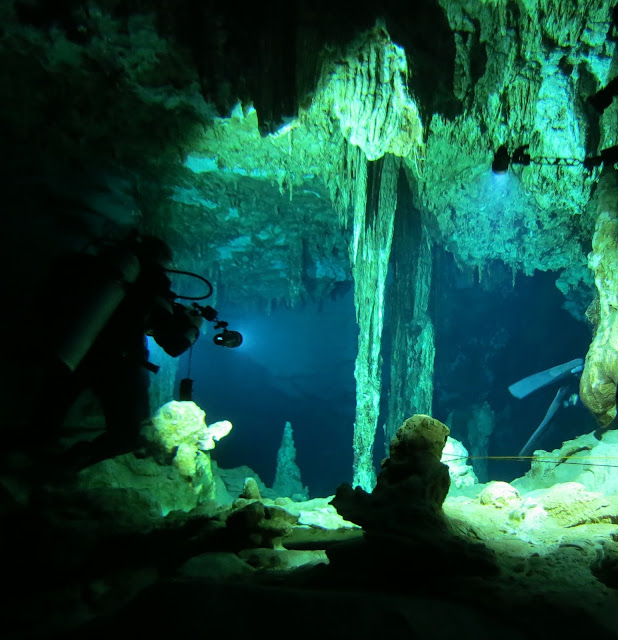 As you can see, a cenote is a sinkhole exposing groundwater below. Cenotes were sometimes used by the ancient Maya for sacrificial offerings, but we were there to explore the caves. There were four of us, following the yellow trail marker line into the heart of the cenote, swimming through impossibly clear water. At times, it seemed we were flying through a fantastic vast cavern, rather than swimming along well underground.

Naturally, all of this made me very curious about cenotes, the Yucatán, and the whole place in general. Here are a few of the questions I had (and answered!) this week.

Can you answer them as well?

1. Cenotes seem to appear all over the Yucatán peninsula. If you look at a map of the area, it seems they all line up just inland from the Riviera Maya coastline. But I know there are cenotes in the north of the peninsula as well. Is there a larger pattern of cenotes at work here? If so, what caused that particular pattern of cenotes to form?

2. As you know, Cancun is on the eastern side of the Yucatán, in the state of Quintana Roo. That name--Quintana Roo--has always struck me as slightly odd. Where's this name from, and why does it sound so non-Spanish? (Extra credit: How do you pronounce "Quintana Roo"? While there, I learned I've been saying it wrong all these years!)

3. Speaking of Quintana Roo, when did it become a full-fledged state of the United Mexican States (Estados Unidos Mexicanos)?

4. While walking around, I found a tree (apparently native) that is said to have been the basis for chewing gum. Really? What kind of tree is this? What's the story here?

As you search, take note of HOW you found the answers, and let us know in the comment thread!

This post was republished. Comments can be viewed and shared via the original site.
16 comments