SearchResearch Challenge (8/4/16): How many center-pivot irrigation systems do you see?

Dan Russell • August 4, 2016
SearchReSearch
Republished with permission from SearchReSearch
SearchResearch Challenge (8/4/16): How many center-pivot irrigation systems do you see? Dan Russell
One of the most striking things about flying...

... is looking down and seeing giant fields of circles on the Earth below. If you've ever seen these, you might have wondered what they are. They are NOT UFO landing sites, but are just fields that are being served by center-pivot irrigation systems. Here's an example from Saudi Arabia (at 29.9653127, 38.3618227), where you can see that they are literally making the desert bloom (or at least turn a impressively dark shade of green.

When you're on the ground, there's a long, linear contraption that rotates about a central pivot hub, spraying water as it moves in a giant circle. 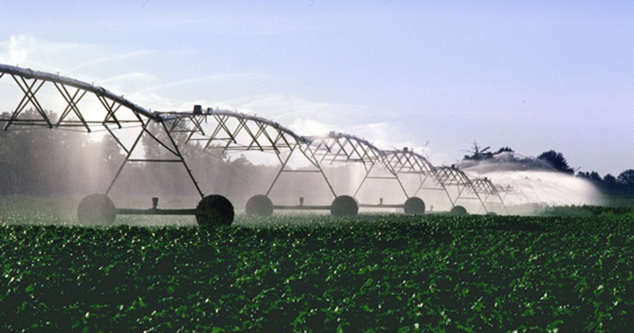 which is driven from the center pivot that sends water down the pipeline.


As you can see, these are pretty impressive systems.

Recently, as I was flying over the middle of America, I was wondering how the center-pivot systems in the US differ from other countries such as the Saudi system shown above in the first image.

Here's an image from the middle of the US that has a lot of center-pivot systems:


Obviously the soil is very different here. But what else is different here? My curiosity leads to today's two SearchResearch Challenges:

1. (Easy) What's the most obvious difference between the US and the Saudi center-pivot irrigation systems? (There are a lot of them. Can you list one or two? How did you figure it out?)

2. (Hard) How many center-pivot irrigation fields can you count in both of the images shown here? Both images were taken from an altitude of 40 miles--but which location has more of the circular-disk-shaped fields? (You should count but little and big fields.)

The second question is a bit tricky. Here are a couple of hints...

A. There are better ways than counting by hand. Can you think what they might be?

B. I don't know of any obvious way to use Google to directly answer this Challenge. I used Google in the process of solving it, but it was somewhat indirect.

C. Before you spend a lot of time trying random things, think carefully: What would be a good way to approach a Challenge like this? What would be the best approach? (You should think to yourself: What would Dan do??)

As always, be sure to tell us HOW you solved this Challenge. Tell us what steps you went through to solve this. (For calibration, it took me about 10 minutes to find a method, and then about 2 hours to figure out how to use the method to come up with an answer.

This post was republished. Comments can be viewed and shared via the original site.
17 comments