The other day I was thinking about gomphotheres, as one does on nice spring afternoons... 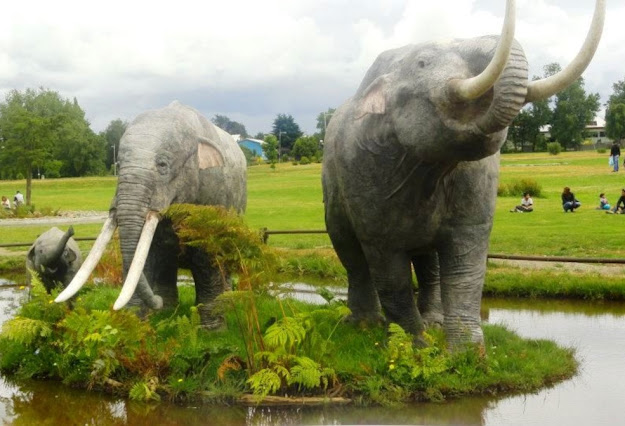 ... remember them? They're a kind of elephant-like animal that lived in North America during the Pleistocene? We mentioned them in an earlier SRS post about avocado seed dispersal.
I remembered that they were native to North America (or Siberia, depending on how far you want to go back in time). They were widespread in North America during the Miocene and Pliocene epochs. That's all well and good, but then I read a fascinating article about this that pointed out how they were ALSO in South America.
But I knew that day in the day (that is, during the Miocene) North and South America were separate continents separated by a lot of ocean.
When you put all that together, you have to ask yourself: How does a gomphothere get from North America to South America if they're separate continents?
I looked up the geohistory of Panama and found that it emerged from the sea about 3M years ago.
If Panama didn't exist until around 3M years ago, how did gomphotheres get from one to the other? Did they swim? (THAT seems unlikely.)
Remember that the Miocene ran from 23 to 5 million years ago, while the Pliocene ran from 5 to 2.5 million years ago.
So if Panama emerged as a land bridge between North and South America about 3M years ago, that gives the gomphotheres 500,000 years to wander from North into South America.
That makes sense. That's a lot of time, they could have easily migrated from point A to point B in half-a-million years.
And... IIRC, armadillos are native to South America, but now they're all over Mexico and parts of the US Southwest.
Interesting. So.. did they come north when the Panamanian land bridge formed? Did they come north while the gomphotheres went south?
Naturally, I'm thinking about these (apparently) disjointed observations, and thinking to myself that the emergence of the Panamanian land bridge must have had huge biological consequences. SURELY someone has written about this, right? I'd like to read more about this mega-event--but how?
This line of thinking leads to two key questions that I think you'll find interesting (I certainly do!)...
1. The emergence of the Panama Isthmus must have been a big deal biologically. If I was to do a search for this, what would be the best term for this? There MUST be a specialty term that I could use to search for more information. What would that term (or phrase) be?
Another apparently disjoint observation that actually links into this in an interesting way...
I remember reading that screw worms (Cochliomyia hominivorax) were a major problem for livestock in the United States. They're terrible pests--the adult females lay eggs on hosts (typically cattle or sheep), the larvae hatch and start munching away on the living animals. Sometimes this even happens to humans.
However, in a hugely successful agricultural science program, screwflies have been functionally extinct in the US since the late 1960s.
2. Once you've figured out the answer to the first Challenge, can you figure out the connection between the answer to Challenge #1 and the eradication of screw worms in the US?
I know it seems disconnected, but once you figure it out, you'll be as amazed as I was upon learning this little story. Sometimes these things really do work out.
Let us know how you find the answers to these Challenges! Post your discoveries in the comments.
And...
Search on!

This post was republished. Comments can be viewed and shared via the original site.
27 comments