... many of which strike me as pretty unusual. There's the annual wife-carrying competition (multiple locations), an international "worm charming" championship in Chesire (UK), and the locally well-known "kinetic sculpture race" in which contestants race their home-made (and wonderfully whacky) all-terrain human-powered vehicles over a 50 mile course of land, sand, water, and mud. And then there was the "plunge for distance" where the competitor would do a racing dive into a pool, then glide as far as possible in 60 seconds. 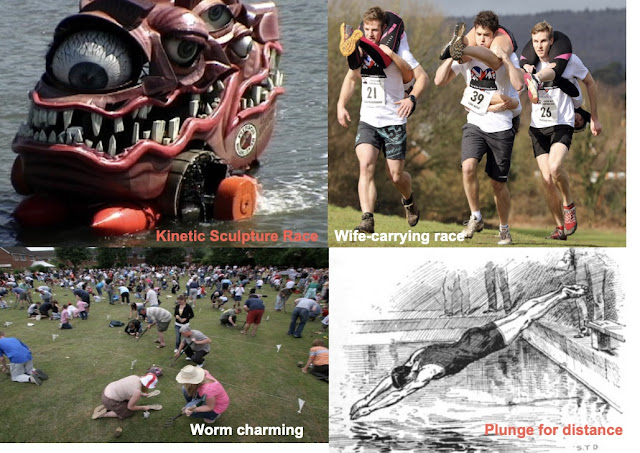 And as with all sporting events, questions inevitably arise. Questions come up about the biggest, fastest, heaviest, most difficult, or tallest events, all of which drive many a discussion in the pub or over the dinner table. It was questions like these that led to the creation of the Guinness World Book of Records.

In recent ale- and stout-powered discussions, three sporting questions arose. Can you use your SearchResearch skills to answer them?

1. As Europe grows increasingly warmer with the passing years, will the long distance ice-skating race that passes through 11 Dutch towns still be able to be held? What's that event called? When was it last held (and who won)?

2. Several of us in the discussion were former collegiate volleyball players, but since it was a very international evening, other folks started to tell us about different versions of volleyball that are played with feet alone. Is this for real? How could you bump/set/spike a ball with just your feet? If so, what is this sport, and where is it played? (Participants insist there are at least 2 different versions of this sport.)

3. Although the next summer Olympics are still a year away, we started talking about former Olympic events that aren't held any more. Tug of war at the summer Olympics (1900-1920) is a famous example of a now discontinued sport. While there seems to be an endless number of swimming events, was there ever a swimming event that was held underwater? If so, what was it? When was it last held? Is there an Olympic champion?

This week's Challenge isn't that hard, although as always, there are sometimes nuances that require a bit more search skill than usual.

What can you find out? When you suss out the answer, let us know in the comment thread.