Dan Russell • November 23, 2016
SearchReSearch
Republished with permission from SearchReSearch
SearchResearch Challenge (11/23/16): The Greek islands: birth and graffiti? Dan Russell
It's Thanksgiving weekend in the US...
... and one of the things I'm thankful for was the chance to travel to such interesting places this year. It really was a great year of wandering-about.
Although we've already had one Challenge about the Mediterranean, I can't resist giving you one more. Here's why...
The Greek island of Delos is a remarkable place. It's a smallish island in the Cyclades chain, more-or-less dead center in the circle of the Aegean Sea. As one of the most important mythological, historical and archaeological sites in Greece, it has archaeological excavations that are gigantic, as befits the birthplace of Apollo and Artemis. It was also the center of the Delian League and the Delian Festivals (with their every-4-year athletic competition). 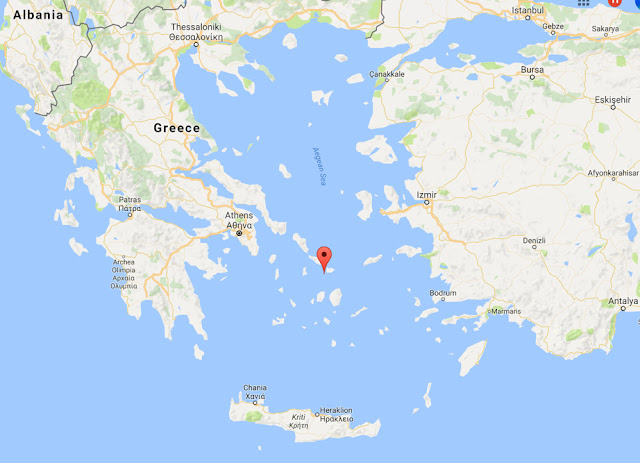 When I visited the island, it was on a perfect fall day--endless blue sky, deep blue Aegean sea.
It's really quite a place. As you can see in the above picture, nearly the entire island is one giant archaeological site. People have been coming this way for thousands of years, both for religious and commercial purposes.
Delos was a stopping off point for traders, priests, slavers, worshipers, and travelers of every kind.
But the island was attacked in 88 BCE by the Persian troops of Mithridates VI, an enemy of Rome, who killed nearly all of the 20,000 Romans on the island. Another attack came from pirates in 69 BCE, which basically knocked Delos out of action as an active trading island. By the end of the 1st century BCE, trade routes had changed to bypass Delos. Around this time it became uninhabited and left as a place that the curious (and the occasional pirate) would visit.
So when I visited earlier this year, I toured the island with a guide, marvelling at the ancient buildings, theatres, and temples.
This walk on Delos brings me to our first Challenge for this week.
The tour guide took us all around, and then pointed to this graffitied statue base saying that it used to hold a very tall statue of Apollo, one was carried away by pirates sometime in the 16th century, leaving behind only the base.
But when I looked at the graffiti, I did a big double take. There was something so obvious and remarkable on that statue base that I couldn't believe she didn't say anything about this. Does it capture your eye as much as it did mine?

1. What's remarkable about this graffiti? Do you see what I see? Can you prove it? 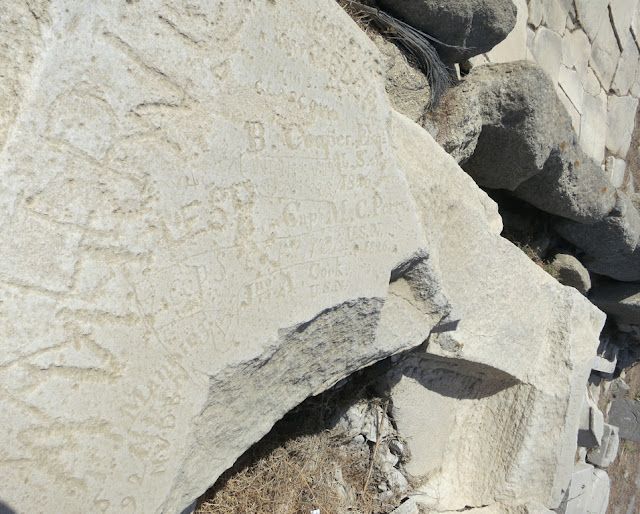 A bit later on that same trip we went to Santorini--another beautiful island not far from Delos. It's a razor-back ridge of a place, with lovely blue-roofed buildings and incredible views, with several smaller islands nearby in a rough circle.
As you probably know, Santorini is a C-shaped island with a center that was blown apart by a large eruption as the center of the volcano blew upward, leaving a giant caldera.
This pattern has repeated over time, with the most remarkable explosion creating what may have been one of the largest volcanic eruptions on Earth in the last few thousand years. (This is the eruption that put the Minoan civilization on full-stop during the second millennium BCE, between 1627 and 1600 BCE.)
That mega-explosion happened long enough ago that no written records survive (except, perhaps, for the story of the plagues in Exodus which many believe are side-effects of the Santorini eruption).
But there was another large eruption at the beginning of the 18th century. Our second Challenge for this week is this:

2. Can you find a written contemporaneous account of that early-18th century eruption on Santorini?

As always, be SURE to tell us how you found your answer. What resources did you check? How did you know to do that particular kind of query?
We're curious about the answers, but also in your methods.
(And, if you've got the time over the weekend, can you figure out why the Delian Festival and Games were held every four years? Does that sound familiar to you?)
Search on! (And avoid the rocks falling out of the sky!)