As usual, I had looked up the tides before going, so I'd know when both high and low tide were to happen. That's an easy query on Google. If you do:

Google will return a list of local tide chart sites, like this (my query here was done from Palo Alto, CA): 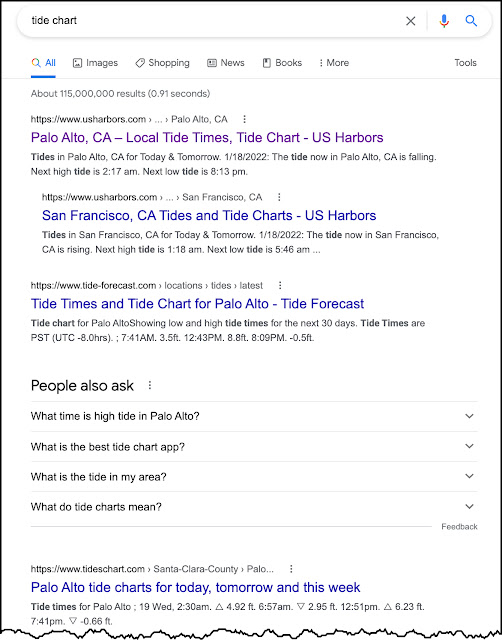 And if you click on the first result, you'll see a beautiful chart of the tides near you:

As it happens, the other day when I went for my seaside walk, I was near Gualala, California, and I'd looked up the tide chart, which looked like this:

In one of those serendipitous moments that defines SearchResearch, I just HAPPENED to have looked up the tide chart for San Diego earlier that morning (I was looking up something else, don't you know...). So when I saw this chart for Gualala, it struck me that the time of the tides were different!

As I've often said, noticing small inconsistencies in the world often leads to curious outcomes. This is one of those.

Here's the tides chart for three locations on the coast of North America, San Diego (just above Mexico), Gualala (one quarter of the distance to Alaska), and Juneau, Alaska (way up north). See the map down below.

That's when I noticed--for the first time--that the tides seem to arrive later and later the farther north you go. To see this, look at the first high tide peaks: San Diego at 6:48AM, Gualala at 7:59AM, Juneau at 10:41AM. Apparently, the tides seem to arrive about four hours later. The distance, as the jet plane flies, is about 1947 miles (3134 kilometers) between San Diego and Juneau, so it seems the "tide" apparently travels at around 486 mph from south to north (787 kph).) 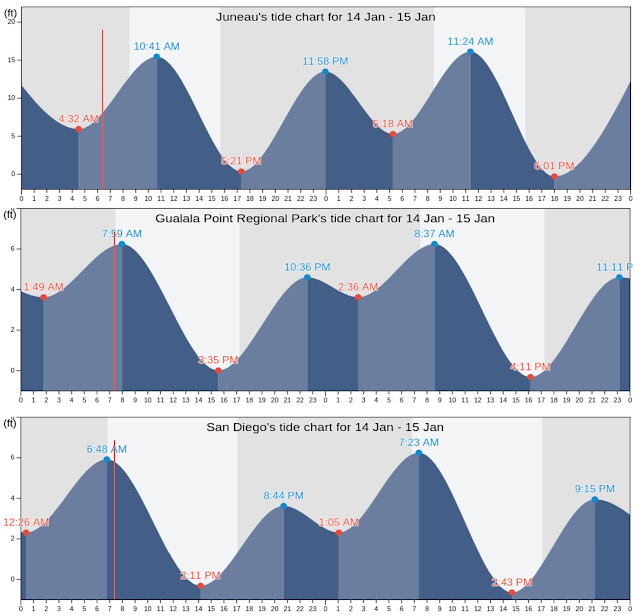 Realizing that the tides don't all go up/down at the same time along the west coast of North America was a surprise. I'd implicitly assumed that they all went up and down at the same time. (A moment's reflection makes me realize that can't possibly be true.)

BUT... it leads to today's SRS Challenge:

When I did this Challenge, I was happily surprised to find that there are some beautiful ways to understand this. Perhaps you can find them as well? (I guarantee that this is an easier problem that the Skytree shadow!)

Let us know what you found to answer this Challenge and HOW you found it!

This post was republished. Comments can be viewed and shared via the original site.
31 comments