... are a 19th century invention, really. TIME has always been around, of course, and for the largest part of human history, time was defined by whenever noon happened locally. That's easy to figure out, but as tech advanced, we suddenly needed to define time carefully so (for example) trains could arrive on time.

For quite a while, different train companies had their own "time zone," which was clearly crazy. (The stationmaster had to keep multiple clocks to know what time each train system thought it was, and when they'd arrive.)

Eventually we figured out that creating time zones, that is, regions of the planet that all share a single clock time, was a great idea.

The obvious thing to do would be to create 24 time zones, each defined by a line of longitude. But then things get wonky: the longitude lines ignore things like country and city boundaries. It would be a real hassle to have the west half of your town in one time zone, and the east half in another.

So.. time zones have interesting boundaries. I was looking at one such map the other day and noticed that it's extremely strange in places.

And when things get strange, that looks like a Search Challenge.

So here are 3 questions for you:

1. What time is it in Newfoundland (Canada)? And why is it different than the time in Prince Edward island (which is due south of Newfoundland)?

2. Can you create your own time zone map by finding data that gives the actual boundary lines for each zone? (If you do make your own map, please share the URL for your creation! We'd all love to see it.)

3. Once you've made that map, what's the strangest time zone anomaly you can find?

I know this sounds kind of difficult, but I suspect it's simpler than you might expect.

And when you've found that anomaly, be sure to tell us HOW you found it and WHY you think that's the oddest anomaly.

(While you're at it, can you figure out why it's so anomalous? Is there a story there? In my experience, there usually is...)

Here's one of my favorite pictures from my 2004 trip to Fiji. It's where the date line crosses through Taveuni. Yeah, it's Sunday on one side of the sign, and Monday on the other.

It has to happen somewhere! 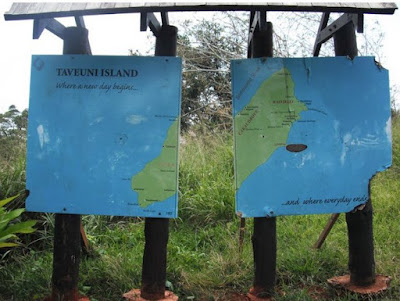