... that deserves practice. And by practice, I mean that you very deliberately look at your mistakes and learn from them.

In an earlier post about Fermi Estimation, I showed how I estimated Enrico Fermi's height by this method. Here's an infographic showing what I did.

HOWEVER... As good as estimation is, it's worth checking your work from time to time in order to learn where you can be better.

In that earlier estimation post, Regular Reader Chris wrote in with a great comment. Here's what he wrote:

As Jon said in an earlier post, the average size Italian was 5 feet 6, but I would say he is below average height. My estimates would make him between 5 and 5"3"

Using this image and assuming an bench height of about 30 inches, this would make him only 60 inches tall (5 feet). Using this image with Robert Oppenheimer (on the left) I estimate him [Fermi] at about 5'2". According to the NY Times Obituary, Oppenheimer was 6 ft... Likewise in this photo he [Fermi] is a good foot shorter than Chancellor Hutchins (right) who was 6'3" according to Commentary Magazine.

Aside from being a GREAT example of using photos to estimate height (rule of thumb: use more than one photo to verify; also get the heights of other items in the photos), this also bring up another valuable estimation heuristic: Always double check your work.

What went wrong in my original post? That's easy to spot: My original estimate of his head size was 9.4 inches (21.9 cm). Where did THAT number come from ? From two sources: (1) my estimate of his head size by comparison with the control panel behind him. I know the size of those control knobs, and I estimated from that. (2) I measured my own head size. Since the two numbers were close, I went with that number.

Thing is, I'm taller than Oppenheimer and a bit shorter than Hutchins. So it's not a surprise that my head measurement would produce a fairly tall estimate.

Chris showed us a great estimation validation method--Look at the person side-by-side with known people (and known heights). 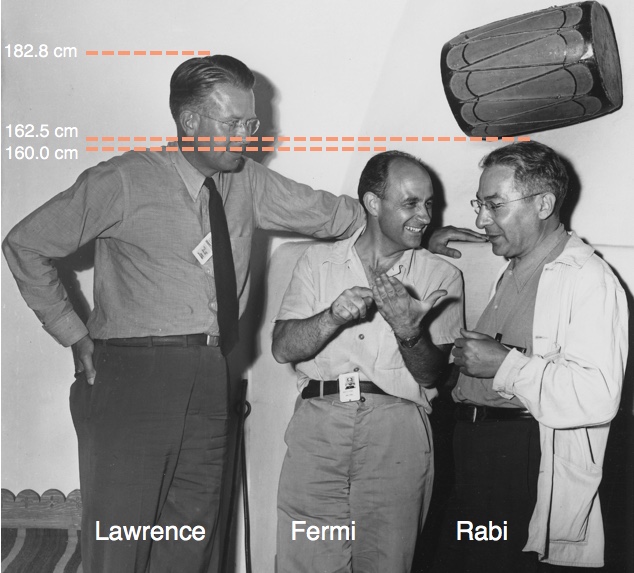 Here's another picture showing three famous physicists: E. O. Lawrence, Enrico Fermi, and Isidor Isaac Rabi standing side-by-side. A quick search for Lawrence shows his height at 6 feet (182.8 cm). A quick search for Rabi shows his height at 5' 4" (162.5 cm) So this estimate by photograph is probably pretty accurate. Fermi was a bit shorter than his friends, right around 5' 3" or so.

1. If you take an initial estimate and multiply it by 7.5, then any error you have in your initial guess is going to be magnified by 7.5! Caution: Make sure your initial data is pretty close before you go multiplying it by a fairly large facto.
2. It's always good to have two very different ways of estimating. In this case, a quick photo check would have shown that my original estimate was off. I'll do that next time for sure!
Estimate on!