Dan Russell • May 1, 2020
SearchReSearch
Republished with permission from SearchReSearch
Comment on… The Future Through the Past – Using archival news to see what’s next in COVID Dan Russell
As soon as I clicked "Publish" I realized I'd forgotten to...

... add in some of the good stuff in my notes file. 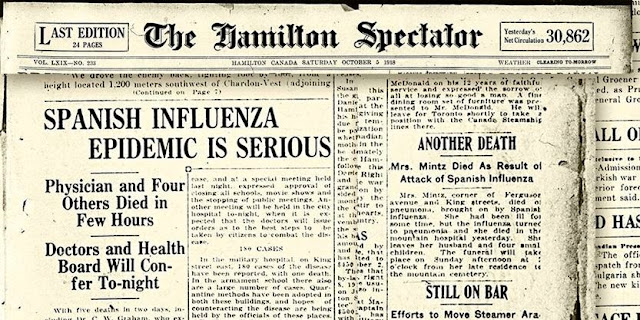 IN PARTICULAR... If you recall, a big part of the point of this week's Challenge was to find similarities between COVID and the Spanish flu, and by looking at the similarities (and differences) to figure out if there was something we might extrapolate from then to now. ("The Future Through the Past," in a phrase.)

So here's a little addendum listing a few of the points of commonality I found, and a bit of what this might portend.

* Opening back up too soon..

In 1918 there were huge pressures to open up cities and counties that had been under the Spanish Influenza "social distancing" (stay-at-home) orders. Just as now, people protested that the lockdowns were hurting the economy and destroying livelihoods.

And, just as the epidemiologists are predicting for states that relax on social-distancing measures too soon for COVID-19, cities in late 1918 and early 1919 had second and 3rd waves of the flu.

In a beautiful piece of work, the National Geographic published the curves for many cities in the US (collecting the data after 100 years). The bottom of the dip after the first peak is around Jan 1, 1919. You can see what relaxing the measures too soon did...

For instance, here are a few beliefs from 1918 that could be easily matched with magical beliefs in 2020...

Does rain destroy the flu?

Some folks believed the flu could be eradicated by “atmospheric conditions.” That is, the disease could be strongly affected by rain. “...as a result, the deadly influenza germs have probably been completely eliminated in this part of the country.” Los Angeles Herald, V. XLIII, N 283, 28 September 1918
Camphor (a potent smelling oil or waxy substance) could used as a way to ward off flu.
There was a run on camphor large enough for the chemical and pharmaceutical businesses to take note.
And, just as in our COVID days, there was a widespread belief that a quinine compound could be a cure for the Spanish flu:
Perhaps disinfectants and germicides will work when taken internally. In a remarkable insight, Professor Wilson seems to have discovered the value of "the most powerful antiseptics and germicides" on the Spanish flu. (It's interesting that he's described as "head of the pharmacy department of one of the leading educational institutions of the country." Why not just tell the reader the name of that institution?)
Fresh air cures the Spanish flu?


* Conspiracy theories were many ...

As with the purported beginnings of COVID-19 in China, there were widespread claims the Germans (the antagonists of World War 1, which was raging at the time) spread the disease and that Bayer aspirin was the carrier of Spanish influenza.

The rumor was that “...the aspirin tablets contain influenza germs and some slow poison,” according to the New York City Weekly Bulletin of the Department of Health (Oct 19, 1918) . This caused the Health Department to conduct laboratory tests of aspirin purchased randomly from locations throughout the City.
Nothing was ever found, however, but Bayer was moved to invest heavily in advertising ensuring that buyers had a favorable impression of their product. Not only was Bayer Aspirin a good product, but it's a "100% American Concern." 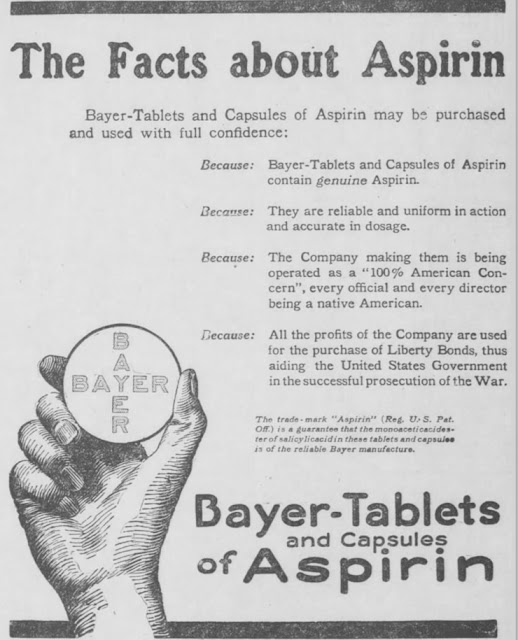 Not understanding the disease...


And so there were attempts to develop an early proto-vaccine (which they called a serum) that was largely based on the extracts of people who had survived the disease.


Even in 1918, treating people with “grippe serum” or “plasma donation” (in 2020) is an attempt to capture antibodies in the blood of people who survived the flu. Medical technology of 1918/1919 wasn't sure what caused the flu, but they knew that transfusions of serum could help in some cases. (NYTimes article on plasma donations in 2020.)

And it was really unclear WHAT was causing the flu. Was it the bacterium Influenzae bacillus as some thought? There were contradictory answers (this is a compilation of possible causes):

Some populations hit harder than others

Common belief: It's just an ordinary flu... nothing special...

“Worry kills more people than the disease itself,” a Chicago public health official was quoted as saying in 1918. “The so-called Spanish influenza is nothing more or less than old fashioned grippe.” Of course, you hear people saying that now about COVID as well.

And... we were tremendously unprepared...
A report sent to the U.S. Public Health Service described conditions on the front lines of the Spanish flu, 1918.

"...[Doctors were] overwhelmed with work [and] were handicapped by inadequate transportation and two days behind in making calls; many patients . . . had been sick in bunk houses and tents for several days without nourishment, or medical and nursing attention, the sanitary conditions of the bunk houses were deplorable; the mess halls were grossly unsanitary and their operation much hampered by the lack of help; the existing hospitals were greatly overcrowded with patients; and patients were waiting in line several hours for dispensary treatment, and were greatly delayed in obtaining prescriptions at the pharmacy. The epidemic was so far progressed that the immediate isolation of all cases was impossible."

And, as we're seeing today, there was limited capacity to handle all the dead bodies, putting office spaces and theatres into service as holding places.
In the end...
The Spanish influenza came, and went, and came back multiple times until finally, by 1920, it was gone. Nobody really knows why (although there are lots of theories, mostly centered around herd immunity).
And, oddly enough, there seem to have been no grand summary articles announcing the End of the Spanish Flu. (At least I couldn't find any. If you do, please let me know!)
The articles about Spanish flu just trail off in late 1920, although research continued for a bit, including the finding that (again, echoed in our own time) that cats might carry the disease and transmit it to humans.
I think we've made the point: Looking at an analogous past event really can help us anticipate what will happen in the future. We should have known that (as pointed out above) that people would open up from their social distancing and masking too early, and suffer more upticks in the number of cases. Or, that people would concoct crazy ideas about what caused and cured the disease. (No, neither camphor bags or internally applied germicides actually help.)
There was even one additional SearchResearch Lesson:

The hardest lesson of all for me to learn was this:
1. When you find something while browsing through online archives, MAKE A COPY OF IT! I can't tell you how many amazing things I found and mentally noted--but did not bookmark or write into my notebook. This is a huge mistake. In many cases I was unable to re-find the original citation, even though I was pretty sure I accurately remembered the article.
Don't expect that your memory of the article will be sufficient to find it again. Trust me on this. You wouldn't believe some of the things I found, but then lost in the sands of the archival news repositories. Don't do that: If it's good or interesting, capture it while you're there... don't count on re-finding it!
Hope you found this follow-up note of interest. I certainly had a good time doing all of this research with you.
Keep searching!
Search on!