Best of the year? And the end of Paul Boyton… (for the moment)…

Dan Russell • December 24, 2015
SearchReSearch
Republished with permission from SearchReSearch
Best of the year? And the end of Paul Boyton… (for the moment)… Dan Russell
Regular reader Fred had an excellent idea.
"Why not," he wrote, "do a summary of the year in SearchResearch?" A kind of year-end look back at the best-of (and maybe worst of) the year.
He send this to me at the end of last year, 2014, but it's still a great idea.
In particular, my "over the holidays" project is to put together a small e-book on the "best-of" SearchResearch, which I hope to post to you sometime in January.
But in the meantime, I'd love to hear YOUR thoughts about this. This leads to this week's not-really-a-Challenge question, but I hope you'll take a couple of minutes to answer...

1. What was your favorite SearchResearch Search Challenge of 2015? (If you must, feel free to slip back into 2014--we never did a summary of that year.) Tell us what you liked about the Challenge you enjoyed the most, or what you learned from it.

2. What was the best / most-interesting thing you learned in 2015 about search or research? I'm looking for good ideas for future SearchResearch Challenges, but also I'm also looking for new information resources that we should all know about.

Pro tip: You can find all of the posts during a given month by using the inurl: operator. Do it like this to find all of the January, 2015 posts:
[ inurl:searchresearch1.blogspot.com/2015/01/ ]
In other follow-up news at the end-of-the-year...
I'm not turning into a Paul Boyton fanatic, but I did find a couple of interesting tidbits this past week. 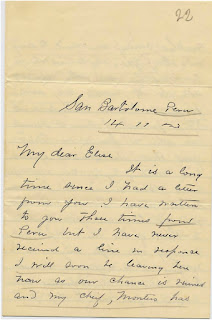 First, I found an archive collection of Boyton's letters (nicely transcribed from their original handwritten forms). This collection includes his "Dear Jane" letter, breaking off their relationship, to Elise (Feb 21, 1893) where he tells her "...my life is one full of danger and I fear I have done you wrong to ask you to share it..." It's an odd letter; he's letting her down partly by saying that his new "secret" job (apparently a reference to his job as a human torpedo delivery man for the Peruvian navy) is too dangerous, and anyway, the letter he had received from Elise's father had "caused me great pain..."
The archive also has the letter of Nov 14, 1883, addressed to Elise from San Bartholomé, Peru in which he announces to her that he is ruined and that their chance for a life together is ruined as he has a son born in the US (to another woman, whom he plans to marry), and his fortune is bankrupt… “It is better to say farewell forever than have you living in false hopes. Forgive me if you can and forget the past had my love’s dream been realized and you become my wife. I would have been happy, but, alas, fate was against me, and it ended. … Forewell forever.”
What a character! I'll let you draw your own conclusions...
Since I was curious about Boyton, I wanted to find out about the last part of his life. In the Google News Archive (News.Google.com/newspaper) I did a search for:
[ "Paul Boyton" death OR died ]
and found this in The Day (New London, CT), April 19, 1924: 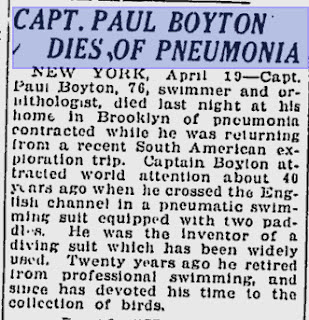 We'd found out about the "professional swimming" part of this life... he spent the last two decades of his life being an ornithologist??
Ah, as I keep saying, everything is interesting if you look deeply enough.
But for the nonce, I'll let Boyton be. (If you follow-up about his life as ornithologist, let us know!)
Search on!