Answer: Why do I hear a trumpet?

This week's Challenge was a fun one, and tests your ability to sleuth out the backstory.
I was walking down the street when I heard an odd trumpet tune being played. It was a surprising tune--not quite a melody, but something puzzling and a little odd.
Here's the picture I snapped as I listened to the trumpet call. (And the link to the full-resolution image.) 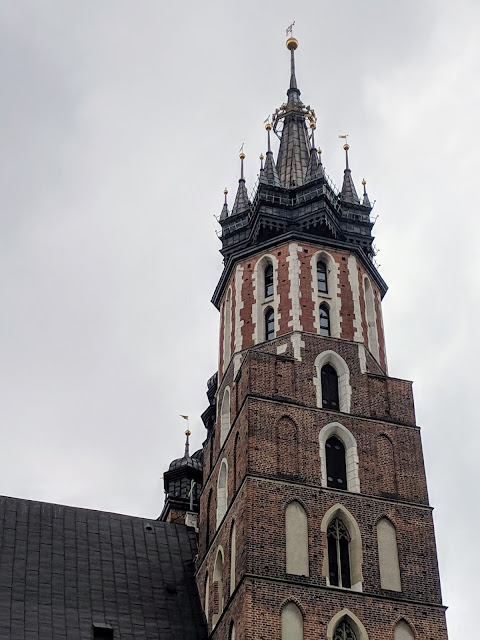 This mystery melody only took me a few moments to figure out... Can you determine what it is, and WHY it is? The Challenge was this...
1. Challenge: Why did I hear a trumpet at this place? Why is the melody so strangely plaintive? What's the story behind the this tune?
To be honest, when I took this photo I did not expect that Search-by-Image would work. It's at a bit of an odd angle, the lighting isn't perfect, and I'm standing on a side-street near the church that's not the usual location for a tourist photo. 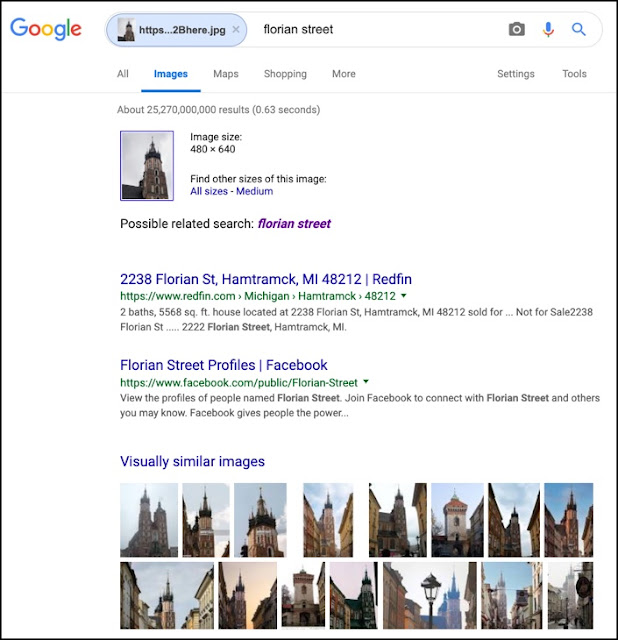 To tell the truth, I have no idea why "Florian Street" is showing up here. But part of being a great searcher is learning when to skip over off-topic results and zero in on what's relevant to you. In this case, the "Visually Similar Images" are pretty good, and the next part of the SERP is super relevant: 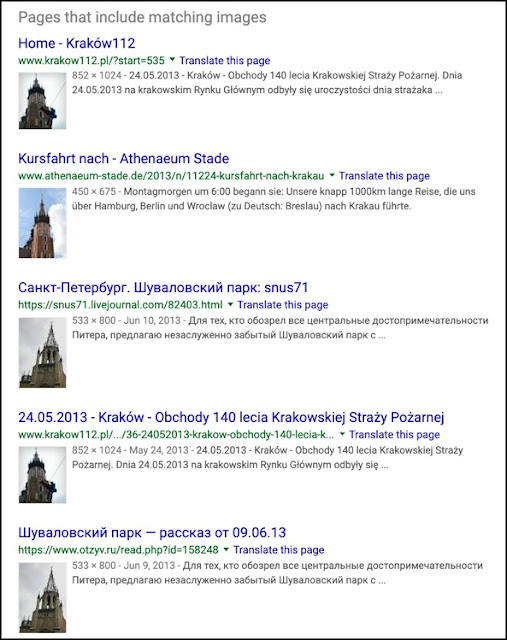 When you click through that first result ("Home-Kraków112"), you quickly learn that this is St. Mary's Basilica in Kraków, Poland. Then, a quick search for:

leads you to all kinds of results that tell the story of the Trumpeter of Kraków, and the melody that's played every hour (and then broadcast throughout Poland at noon).

The story from the Krakow Signal website is that:

The Krakow signal bugle call, or Hejnal Mariacki, dates back to the Middle Ages when it was announcing the opening and the closing of the city gates. The bugler also played it to alarm his fellow citizens whenever he saw a fire or the enemy forces. And the melody abrupt ending is said to commemorate a trumpeter from Krakow who was shot through his throat by a Tatar archer in 1241 when the Mongols besieged the city.

You can find multiple versions of this (probably apocryphal) story by clicking around a bit. But the "plaintive" quality of the song is pointedly due to the trumpeter's arrow-filled demise on not-quite-the-last-note of the tune.

The Wikipedia version of the trumpet of St. Mary's correctly points out that this trumpet call is actually spelled hejnał (the last "L" character has a slash through it and is pronounced like a "w," which means that hejnał is pronounced as "hey now").

That Wiki article goes on with a more plausible story:

Trumpet calls were used in many European cities to signal the opening and closing of city gates at dawn and dusk. The four directions in which the St. Mary's Trumpet Call is currently sounded correspond roughly to the four main Kraków gates before 3 out of 4 of the gates were demolished in the 19th century. 16th-century sources mention other trumpeters on other towers, and it is possible that the “interrupted” anthem was originally meant to allow a second trumpeter at a gate to signal the completion of the opening or closing of the gate. In historic times, trumpet calls on the St. Mary's Church tower were also used to warn of fires and other dangers.

With this search I also found a great video showing the interior of the trumpeter's tower, along with his performance:

Oddly, for those people who actually looked up the EXIF metadata, you'll notice that it's pretty off on this image. The lat/long in the EXIF is given as 50.063975,19.9446389 -- which is definitely in Kraków, but NOT anywhere near. See the map below. Here, the purple dot in the upper right corner is that lat/long, but the dot in the lower left is where I was actually standing. 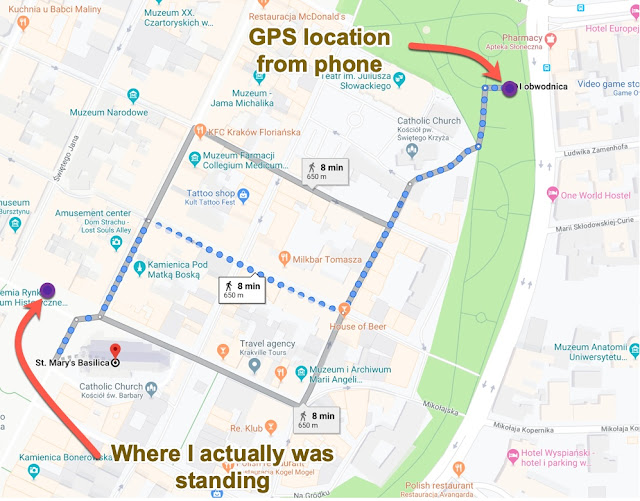 I'm not 100% sure why it's so wrong, but I was standing on a fairly narrow street with only a limited view of the sky. I might have just not had a very good set of satellites in the GPS signal range, and I just got unlucky. Here's my view from Streetview from the place I was standing, at 5 Floriańska Street:


(Yes, that's a street performer on the right side of the street, apparently suspended above the earth.)

1. Double check your GPS data to make sure it's plausible. As you can see, it's not always within a few meters of the target. (In another case I found the image GPS data to be off by several kilometers!) Using Google Maps it's pretty easy to ground-check the location to be sure it matches what you're seeing in the image. Be sure to do this EVERY time you use EXIF metadata. (The other EXIF metadata--time, focus, software version--is probably correct; it's just the GPS you have to really check carefully.)

2. Search-by-Image can work well, even when you don't think it will. SBI isn't a panacea, but depending on how many images there are on the web, you just might get lucky and find it!

3. Be sure to check other media. In some ways, the video is the best summary of what we were searching for--it's certainly more contextualized. You can hear the trumpeter playing, and hear a version of what I heard that day I was strolling down the street (at 11:02AM).


That's it for this week.