Answer: Why are there contour lines there?

Dan Russell • October 22, 2019
SearchReSearch
Republished with permission from SearchReSearch
Answer: Why are there contour lines there? Dan Russell
Questions come from everywhere...
... in this case, I was just staring out the window and wondering "how did all of this landscape come to be?"
As I said, when I looked into the Sierra foothills just northeast of San Francisco, it seemed as though some giant hand had drawn contour lines on the hills below.
That struck me as very surprising. How could this happen? It made me curious.

How could I be seeing what looks like contour lines in reality...? To remind you, here's what I saw. The green wavy lines are clearly trees or shrubs that seem to be following some kind of constant edge through the hills.


The Terrain view of this location is really interesting. 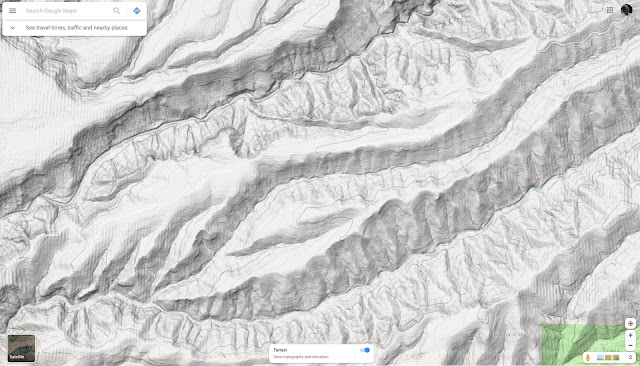 If you put these side-by-side, they're amazingly similar. 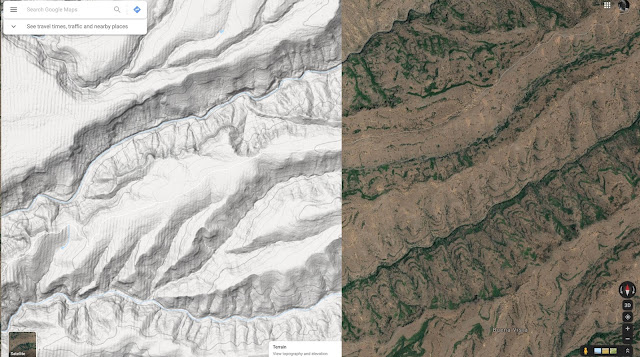 This observation led to our SearchResearch Challenge for the week:
1. What is going on with those naturally green "contour lines" that seem to show up naturally? Why are they growing along the lines of constant elevation? What is going on?
The first thing we need to do is to figure out what this place is called. When you look at it from the air, there aren't any handy labels. Even on the map, the only nearby named things are "Wells Place" and a few creek names, most notably "Mill Creek" (as seen above).

If you zoom out a bit, you'll quickly figure out that this patch of land is halfway between the city of Red Bluff and the Ishi Wilderness (if you keep zooming out, you'll find that this is the southwestern-most part of Lassen Volcanic National Park). And if you zoom IN a bit, you'll find that the Lassen Trail passes through the bottom part of the photo. This is a great overview of the entire area:

So when I started searching, I used the local terms I know and can see on the map of the area ("Ishi Wilderness" "Lassen Trail" "Mill Creek").

But what am I searching for?

and so on. Trouble was, none of this was working for me. I got lots of hits, but nothing that was useful in any real way. I can SEE these things, but I have no idea what they're called. (Or even, really, what this place is called--I'm looking for something that's between several named entities. An unnamed region is pretty hard to search for!)

But as I was doing this, I realized that the last west of the Ishi Wilderness (that is, in the middle of our search area) is fairly covered in springs. Since springs mean water, and since water leads to green growing things, I wondered if there might not be a connection. Are all of those springs somehow making green things grow in arcs that follow contour lines?

My query was perhaps not obvious, but works quite well:

Why Tehama County? I know that in the US, the United State Geological Survey (USGS) often organize their content (e.g. lists of geological features) by county. A quick check of Google maps showed me that the boundary of Tehama County included our interesting location at 40.081801, -121.903088 (link to Google Maps at this location).

See Wells Place just to the right of the city of Red Bluff? That's in the middle of what we're looking for. So, after I did that query, I found a list of Tehama County springs.

With all of those springs, I made a quick map of some Tehama County springs using Google's My Maps service. (link to my map)

What I found so interesting about this map is that there's a long line of springs uphill from the green contour-following arcs of green. Remember how they seem to follow along the edge of the creeks?

Here's the view of Mill Creek we saw earlier.


Here's another view of the same thing as seen in 3D Google Maps. This is a 3D view of the satellite image from above. (You can make this first clicking on the 3D button in the right-hand side control panel, and then title by holding down the Control-key while moving the mouse up and down to tilt the surface of the Earth.) 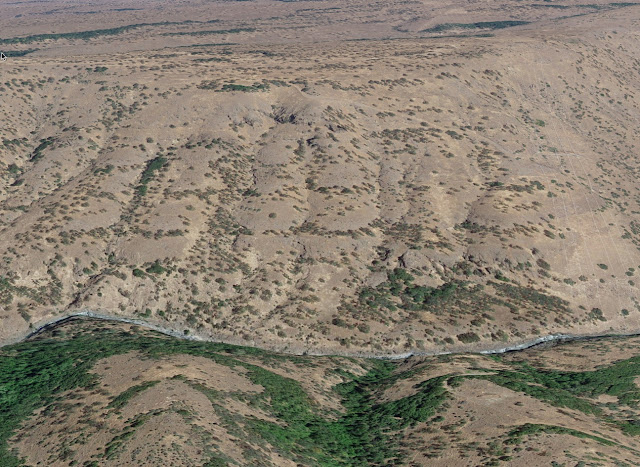 From this perspective, it's clear that those arcs of bushes are really more-or-less horizontal lines. They look a lot like bedding planes that you might see in a canyon cross-cut. Here's an example from the Grand Canyon--bedding planes are the layers of rock you see in the canyon wall.


It's pretty clear that in canyons like the Grand one, the river cuts a cross section across the bedding planes exposing places where you can see the structure of the rock layers. It's like you've cut a layer cake and can see the different layers, as well as the frosting. 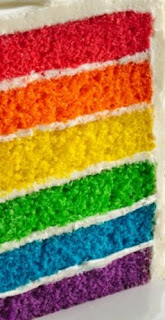 Here's a diagram I drew to make this really clear. Instead of white frosting, here's a valley with the bedding planes / contours shown with red dots.

Putting two and two together, we know there are lots of springs in the area, but do they supply water to the bedding planes that then flows to the place where they're exposed in the creek valley?

What do we search for now?

I'll spare you the next few hours of searching. I tried lots of variations of search terms having to do with bedding planes, hydrology, water flows, etc.

But I didn't have much luck until I started looking for versions of this query:

Where did "Tuscan Formation" come from?

I all of my reading on the topic, I finally learned that this whole area (from east of Red Bluff to the Ishi Wilderness) is mostly covered in the "Tuscan Formation" (on the bottom) or the "Riverbank Formation" above.

I first saw that term after I did a search for:

The thing is, once you go down that rabbit-hole, there's a LOT of things to learn about. When you look at a map of the area, they often are extremely complicated--to wit--here's a section of the geological map near Mill Creek (this is of Cottonwood Creek, just a bit to the north of Mill Creek at 40.209742, -121.966270):

Everything labeled with a Q-- (e.g., Qrb) are parts of the Riverbank Formation from different times--they're basically different layers that were laid down many years apart. These are all parallel layers in the complex layer cake of the geography in this area.

If you look carefully, you'll see that this map translates into this image: 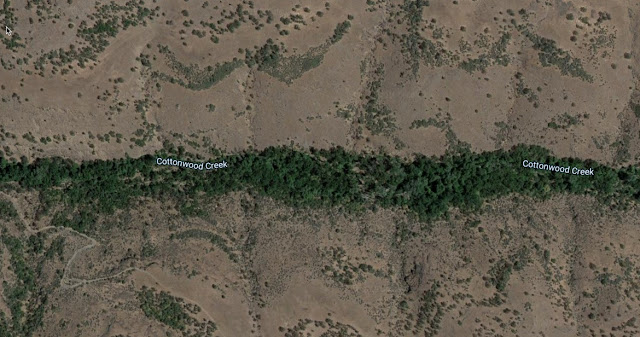 The green line is the watered foliage along the creekside--no surprise there. But the arcs of green follow the Qrl / Qrb lines. That is, the different lines of layer boundaries. The same story is repeated everywhere in this region. When one formation contacts another, there's a dividing line, and water flows along that plane, coming out at the edge of the creek erosion, where plants can absorb it and grow.

So now we have a pretty decent idea about what's going on.

The green arcs really ARE on contour lines. The contour lines are actually the places where two different layers of the formations meet. Groundwater in present in these formations (as we saw in all of the springs uphill from this greenery), and slips between the layers until there's a river cut in the soil, exposing the water along the edge, following the contour lines exactly.

1. Sometimes simple questions get very hard. This was hard because I had to learn a lot on the way to be able to ASK a decent question. I learned about the different kinds of springs (toespring, linear seep spring, etc.) because I needed to understand what caused each. This really was a challenge because I had so much to learn!

2. Names matter! Identifying a place name is important, especially for those places that don't really have a name. In this case, the name "Tehama County" included the whole area, but it was incredibly useful as using that name let me find all kinds of resources, even if the area I was searching for was only a piece of the whole.

3. Great information resources can be overwhelming, especially when they're produced for professionals. I'm not a professional geographer (or hydrologist), so when I see these immensely complex and detailed maps (e.g., the USGS Geologic Investigations Series Maps--here's the one for the Tuscan Formation), the trick as a searcher is to NOT be intimidated. Someone understands these things; you can too. You might have to read a bit of background material (I certainly did), but it's not impossible.


I have to admit that I spent MANY hours on this... probably 10 hours or so. There was a lot of stuff to learn in order to even begin to understand what was going on here.

In fact, I had SO many maps and guidebooks and documents open at once that I finally had to bring in a 3rd monitor! This was my setup in my home office. Luckily, second (and even third) monitors don't cost that much anymore. And it vastly simplified what I was trying to do. 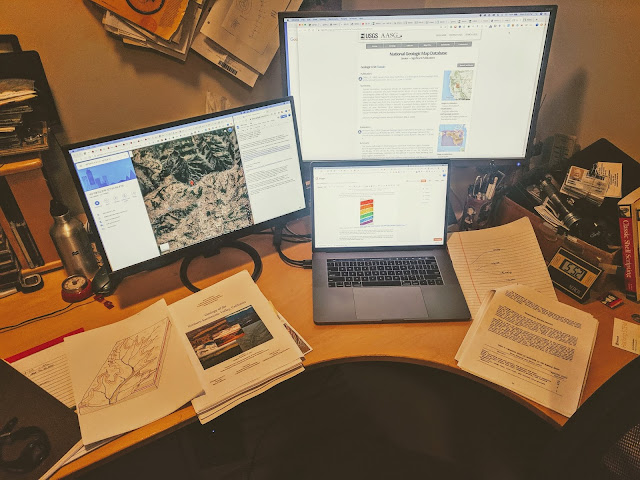 As many other, wiser people have said before me... now that I've started this, I realize how much I really don't know.

But I don't mind the hours spent. I was learning fascinating stuff all the time. It's a kind of graduate education that's difficult to get anywhere else.

Hope you enjoyed this quest as much as I did.