Answer: Why an arc of lakes?

Last week's question was "Why is there an arc of lakes stretching across North America in a gentle arc?" Here's that motivating picture (drawn from Google Earth with my annotation on top): 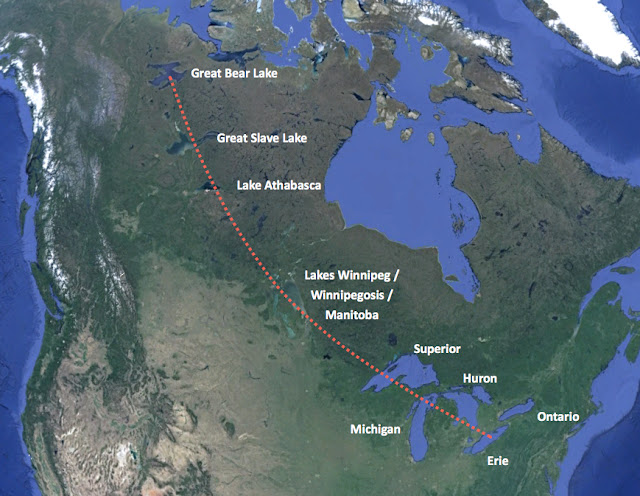 What's going on here? Is there some kind of causal story here?

And, to our point in SearchResearch, how would you search for something like this?

My search behavior was a bit like Jon's--I started with a list of lakes, and added the word formation at the start. I wanted pages that would talk about ALL of the lakes and about any mechanism that would have caused their formation.

And after scrolling down a bit through a bunch of obviously not-perfect pages, I found a book from 1917 (G. C. Fry, "A Text-book of Geography," 1917) which notes: "The larger lakes lie along a curved line, convex towards the west, extending from Lake Ontario to Great Bear Lake on the Arctic Circle." And attributes the plethora of lakes to "...the great icesheet which once covered almost all the continent from the middle Mississippi northwards."

This gave me my first clue that this might be due to massive glaciation.

I also found a Reddit thread asking this exact question (are these lakes formed by the same processes?). Although I don't know who answered the question (someone called In_Media_Res), but it also gives a hint about how to frame this question with her response:

"After the last glacial maximum, North America began to experience post-glacial rebound, meaning that land which had been pressed down by the massive weight of the glaciers expanded and shifted, forming rifts. The glacial meltwater initially had settled into pre-glacial canyons and valleys to form large proglacial lakes, but as the ground swelled the geography changed and those huge lakes drained into smaller ones. This is what happened to Lake Agassiz, which became Lake Winnipeg, Lake Manitoba, Lake Winnipegosis, Lake of the Woods, and Cedar Lake; and Lake McConnell which became Great Bear Lake, Great Slave Lake, and Lake Athabasca."

She then goes on to point out that the Great Lakes (Superior, Huron, etc.) have longer histories, but were also filled by glacial melt.

This sounds plausible, but I want to check this story from another couple of sources. How can I do that?

What this writeup suggests is to start looking into the geological story of each of the lakes, paying particular attention to the glacial part of the story.

Lake Athabascan: The lakebed formed as a result of glacial erosion, and sits on old precambrian rocks on the Laurentian Plateau. [Lakepedia]

I kept looking, and finding more-or-less the same text in every lake writeup. I see a pattern here.

Reading all of this motivated me to ask a more general query:

And THAT is when I struck gold with Another Reddit thread about the arc of lakes across North America, but this one has many more threads to follow, and is in the AskScience/ Reddit area (which has pretty decent science content).

"... [the lakes ] are along a line where the Canadian Shield meets softer bedrock that is more easily eroded and deformed through glaciation than the Shield is. (Taken from bartonlong's response)..."


In essence, the Redditor dmyurych and Barton Long argue that the Canadian Shield is a large zone of tougher rock. When the glaciers retreated, they ended up scouring out larger lakes along the edge of the Shield rock.

This suggests that the pattern of lakes on the Shield should be much different than lakes on the earth in the green & purple regions.

If you zoom in on that map, you'll see this is what Great Bear and Great Slave lakes look like (here, the black areas are water): 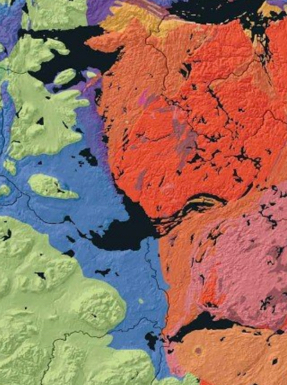 And if you compare it with a Google Earth image, you'll see that the lakes in the east are very different than ones in the western part of this region. 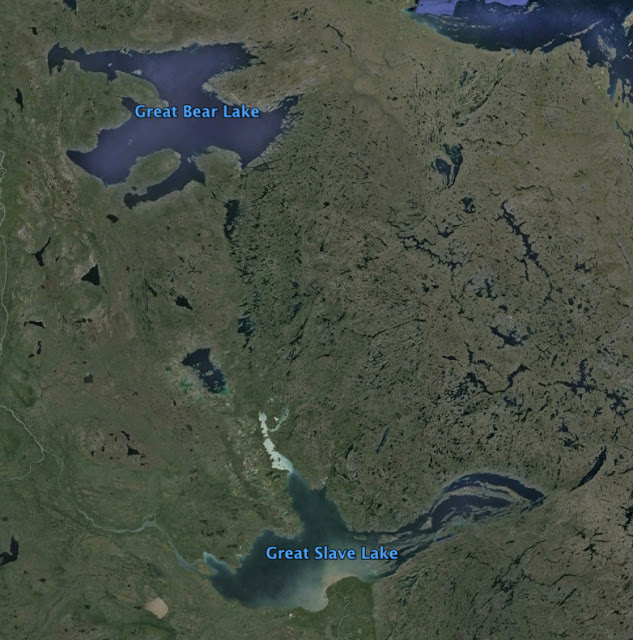 In fact, you can see the line of lakes right along the edge of the Canadian Shield running south from Great Bear Lake into Great Slave Lake.

I was curious about what kind of rocks these were, so I did a Search-By-Image for the map (so I could get the rock-type legend), and found that it is from a USGS called "North American Tapestry of Time and Terrain." The legend from that map is partly shown below. As you can see, the rocks in the Shield are very old. 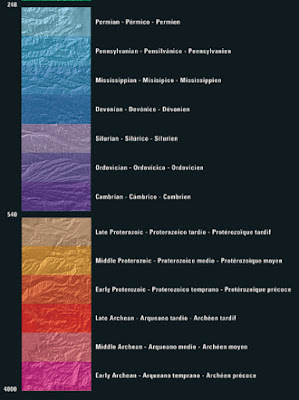 Looking up the rocks:

I found that the rock is exposed Precambrian igneous and high-grade metamorphic rocks forming the ancient geological core of the North American continent. The Shield stretches north from the Great Lakes to the Arctic Ocean, and along the line of large lakes that formed at its margin.

Now this is getting interesting. Clearly the Canadian Shield plays an important part--both from what we've read and what we can see in the maps and Earth imagery.

So I tried one last query:

Guess what? I found several nice documents that discuss the arc of large lakes that formed at the edge of the Canadian Shield. A nice one is The Last Lost World: Ice Ages, Human Origins, and the Invention of the Pleistocene (Pyne & Pyne, 2012):

"The Laurentide ice sheet left a watery echo of itself in the soggy landscape of the Candian Shield and that arc of freshwater lakes along the Shield’s edge, altogether almost 10 percent of the Earth’s fresh water."

I think we've figured it out. That arc of large (and small) lakes marks the edge of the Shield with a tracery of watery regions that were carved out and filled-in by glaciers melting during the last Ice Age.

Second source everything: As you know, I always second source things I learn.. but I also pay attention to the first things I learn. In this case, that Reddit thread turned out to be fairly accurate. But more importantly, I picked up some key terms and ideas that led to even better queries. Key idea: Pay attention to terms and concepts, even when you see them in not-quite-reliable sources... they can be incredibly useful in leading you to subsequent queries! (Pick up those key vocabulary terms!)

Triangulate: As you see above, the maps AND the Google Earth images are really nice corroboration for each other--they're definitely something interesting going on along the arc-line that extends from Great Bear down to the Great Lakes... By zooming in, we can see the sudden change in the texture of the lakes; finding the USGS map with the different terrain rock types just confirms that new understanding.

When you're teaching a unit like this, it's important to pre-research these kinds of things. There are LOTS of geological features that look like they're volcanic, or meteoric, or manmade... but which in fact are none of those things. (Great example: Carolina Bays -- formed by meteors, or formed by more ordinary geological processes?)

For instance, there's some argument that Hudson Bay is part of a large impact zone, but the preponderance of evidence is that this isn't the case.

But for a great research topic, there are many fascinating geology topics to follow-up. A few examples: slickensides, Lake Agassiz (historic lake bigger than all of the Great Lakes combined), or Doggerland.


Hope you enjoyed this little SearchResearch task. I certainly learned a lot!