Answer: Which animals are associated with what professions?

Dan Russell • May 10, 2016
SearchReSearch
Republished with permission from SearchReSearch
Answer: Which animals are associated with what professions? Dan Russell
Sometimes searches are tricky...

This week we're looking for animals that are closely linked to certain professions. Dalmatian dogs are often thought of as "firefighter dogs." 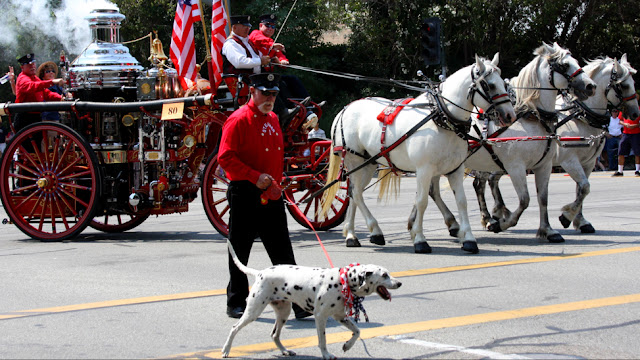 Seeing this kind of thing made me writeup last week's Challenge:

This is both a fun question (which animals can you think of?), and a hard question: HOW would you do this search.

From looking at the comments this week, it's clear that lots of people knew things off the top of their head.

Jon remembered that: lab rats / scientists or guinea pigs / scientists go together, and that canaries / coal-miners are often mentioned in the same breath. A bit later he also came up with: corgis / Queen Elizabeth (which is clever, but not really a profession, per se).

Gauche Murleau came up with sharks / lawyers. (Not all associations need be positive!)

While Chris also thought of doctors / tropical fish, although this is stretching the relationship thing just a bit.


... all of these are basically remembered by each of the readers. Almost nobody did a search to find these things.

How would you approach this kind of a problem?

In my case, I thought about it this way: "What terms would people use to write about such relationships?" and "What patterns of language would they use?"

Once I've figured that out, I can try to create a query that expresses that pattern.

I started by looking at job/animal pairs that I already knew about. Since I already knew that snakes are often used in iconography about doctors, I did this search: 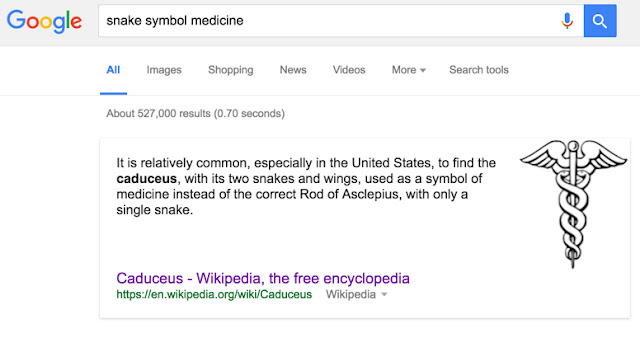 I was looking for common language expressions that I might use as queries. If you look in the Wikipedia article about the Caduceus, you'll find phrases like "...symbol of medicine" and "...symbol of healthcare."

So I experimented with that for a while, learning that this pattern is WAY too general. To make it work, I had tog restrict it with additional terms like this:

and I found a few things (such as the pineapple as the symbol of hospitality). But it's not quite right.

What I really want to ask my search engine is:

[ Find me an animal that is symbolic of an entire profession ]

But (currently) there's no good way to say this.

Finding a profession / animal pair is tricky--both are difficult to describe. So when you've got a search Challenge like this, you have to think about other ways to express it.

and then switching those terms around in various combinations. Notice that I tried synonyms of the emblem/mascot/symbol and of the profession/job/vocation.

They all kind-of worked, and by searching with repeated combinations, I was able to find a few more things (mostly repeats from above).

Then I thought to try Images as a way to search for these things. And that was surprisingly a bit more productive.

This repeats our discovery of snakes with medicine.
While this one:

Shows us the rat or mouse is association with scientists.
But here was a great one that surprised me: teamster / horses... although it's obvious in retrospect.

I wasn't able to find many more than the ones the incredible SRS folks already commented on.. but this was a great search task!

1. Use your social network. In this case, all of the readers of SearchResearch is an impressive "hive mind" you can tap into. You might not be a blogger, but this is one reason to create and curate your own social network. Be at least occasionally a Twitter, G+, Facebook user: It gives you access to people who can think very differently than you do. That difference in perspective can be a valuable thing.

2. Use more specific terms. As we saw, sometimes you have to do these kinds of searches one-at-a-time, instead of looking for ambiguous terms like "profession," uses particular jobs (like "doctor") or categories (like "teamster" or "scientist") instead of a less determined term

3. Try other modes. In this Challenge, looking in Images was helpful. (I also tried Videos and Books, but they didn't work out.) But often, switching resource types can give you a great set of suggestions.

I hope you enjoyed this Challenge. Your answers were excellent!