Answer: Where is this place? Where do the people live?

Dan Russell • February 7, 2020
SearchReSearch
Republished with permission from SearchReSearch
Answer: Where is this place? Where do the people live? Dan Russell
A little out of sequence...

Recall what this Challenge was:

Flying back to the US from Europe I looked out the window and saw a few islands glinting greenly on the sea. What could be down there?
Where is this place? (This isn't an image out of the window, but a pic from Google Maps showing the location.) 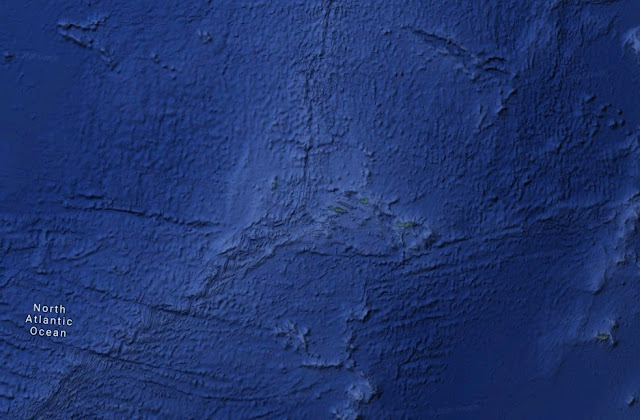 I figured it out later, but I thought this would make a nice Challenge.

1. From this blue satellite image, can you figure out what island archipelago I was flying over?

This was the easy part. I noticed two things about this image... (1) it says "North Atlantic Ocean" on the left. (2) there's a giant crack that makes an upside-down Y shape in the center of the image. (Aside: That shape is called a pall in heraldry. In this case it's an inverted pall.)

I thought I'd start by just moving my Google Maps view to the North Atlantic to see if I could spot anything. Look what I found! 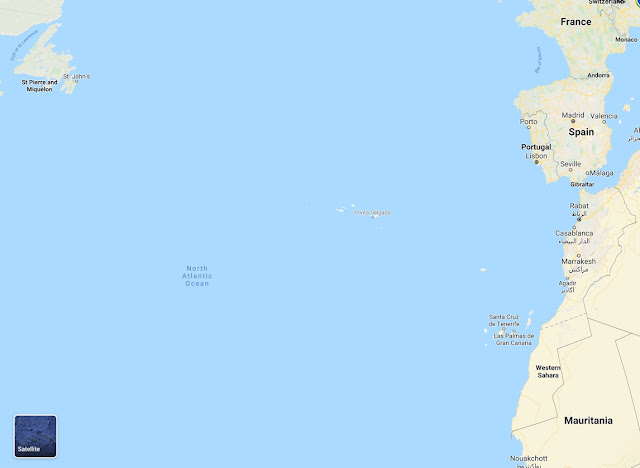 Surprise! In the middle of the ocean I found a group of islands! If you read carefully, you'll see one called "Ponta Delgada."

Naturally, I wanted to be sure that this was the right one, so I had to check the Satellite view of this area by clicking on the Satellite button in the lower left. If you do that, you'll see that same inverted pall shape in the ocean floor. So this is clearly the same place. Zooming in a bit (past the cloud layer) shows us what's down there: 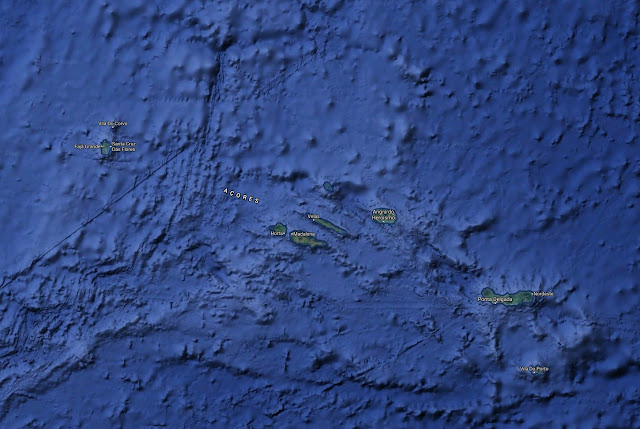 Aha! It's the archipelago of the Azores, an autonomous region of Portugal in the mid-Atlantic. Note that it's spelled Açores in Portugese.

The unusual submarine topography is caused by the Azores Triple Junction (ATJ), a geologic triple junction where the boundaries of three tectonic plates intersect: the North American Plate, the Eurasian Plate and the African Plate. This triple junction is on the Mid-Atlantic Ridge in the middle of the the Azores, almost due west of the Strait of Gibraltar.

This is an area of great vulcanism, with fantastic volcanic mountains and more than a few hot spots with geysers and hot springs.


2. After I found out what the islands are, I did a bit of reading and found that a favorite dish is cozido, which has an unusual method of cooking. What is that cooking method? Are there other countries that also cook with this unusual method?

It's straight-forward to search for [ cozido ] and find that it's a Portuguese stew (often made with vegetables (beans, potatoes, carrots, turnips, cabbages, rice), meat (chicken, pork ribs, bacon, pork ear and trotters, various parts of beef), and smoked sausages (chouriço, farinheira, morcela, and blood sausage), among others. It is traditionally spiced with a fair amount of red pepper paste, white pepper and cinnamon.

But that's the traditional Portuguese version--what's special about cozido in the Azores?

quickly tells you that in the Azores (especially in Furnas, one of the villages), with abundant geysers, cozido is often cooked with an underground heat source, usually by burying the pot in the steam-heated earth. Here they are lifting the pot from a cooking hole that's dug near an active geyser: 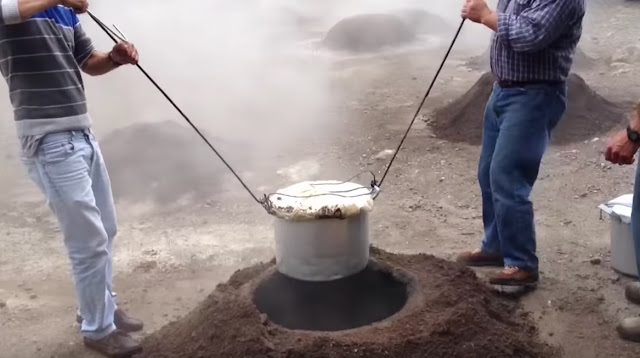 In the bottom of each hole the ground water is boiling. (I want to know who dug that hole and how!)

And here's a YouTube video showing how it's done: https://www.youtube.com/watch?v=Z7-iflAUh4g


Traditionally, it was made with veggies, pig ears and pork belly, but I imagine family recipes vary tremendously. And, as Regular Reader Luís Miguel Viterbo points out in his comment, it might taste a little sulfurous!

One day I'll get there and let you know what my taste buds say!

To find other places that cook with this method, I did the search:

and found a restaurant on Lanzarote (near the Canary Islands) that uses underground heat, as well as a thriving tradition of cooking hverabrauð, a kind of bread baked by volcanic heat in Iceland. I also found a traditional Japanese dish, onsen tamago (温泉卵), that's cooked in the hot waters of a spring.

Given that story, I figured there might be more examples if I just searched for [ place with hot springs hot springs cooking ] where I'd substitute a place name in for the

I found the fabled Fishing Cone on Yellowstone Lake--a place where you can catch a fish and then drop it into a nearby fumarole with boiling water. Three or four minutes there and you'll have poached fish.

(Although, as a footnote points out: While boiling live fish in the thermal features of Yellowstone Park has been prohibited since 1911, some who have tried it since have reported that the fish are imparted with an unpleasant taste of sulfur and other minerals which makes the novel method less than ideal as a practical approach to cooking.)

I guess if there's heat, someone will figure a way to use it. (And sometimes prohibit it!)

3. This island group is pretty small, but the people are famous around the world. It might seem an obvious question, but where do most people from these islands live?

This could be a tricky question: do I mean living emigrants from the Azores, that is, people who were born there... or do I mean descendants of people who once lived in the Azores?

This time, I'm going to do a search for:

to look for documents about people who left the Azores, both recently and historically.

The Wikipedia article about the Azores says (lightly edited for clarity):

Since the 17th century, many Azoreans have emigrated, mainly to Brazil, Uruguay, the United States and Canada. In the US, Rhode Island and Southeastern Massachusetts. From 1921 to 1977, about 250,000 Azoreans immigrated to Rhode Island and Massachusetts. Emigrants from the US East coast later returned to Azores and taught the American dory fishing technique to the Portuguese who began catching cod again on the Grand Bank in the 19th century.

Northern California was the final destination for many of the Massachusetts immigrants who moved on to the San Joaquin Valley (especially around the city of Turlock). In the late 1800s many Azoreans emigrated to the Hawaiian islands and Bermuda.

Florianópolis and Porto Alegre in the Southern Region of Brazil were founded by Azoreans, who accounted for over half of Rio Grande do Sul and Santa Catarina's population in the late 18th century.

The Great Recession of 2011-2013 led to an increase of out-migration from the Azores.

It's useful to follow up the links in the Wikipedia article (which I did) to validate these claims. They do seem to be pretty correct.

In particular, one link from the Wiki-entry led me to a wonderful NYTimes article about Azorean emigration; the author points out that "..About a million North Americans were born in or descend from the Azores — four times the current population of these islands." That's a powerful lot of emigrants, and that's just in North America. I'm willing to bet there are similar numbers in Brazil and South America generally.

1. Just looking at the maps sometimes works! Especially when you have a big clue like the label on the map. Don't ignore obvious clues...

2. Even rare terms (like cozido) sometimes need a place specifier to get the correct sense of the term. I was surprised to find that cozido is a well-known Portuguese term. So to get the RIGHT version of cozido we had to add Azores to learn about the Azorean version of this subterranean treat!

3. Poking around with synonyms (as we did with place with hot springs) will often expand the range of things you find. Try it! Google doesn't think of Yellowstone as a synonym for Azores or Japan, but if YOU know that there are hot springs in all those places. (Want to find more hot spring places to try--check out a search like [list of countries with hot springs]