Answer: Where is the oldest solar observatory in the Americas? 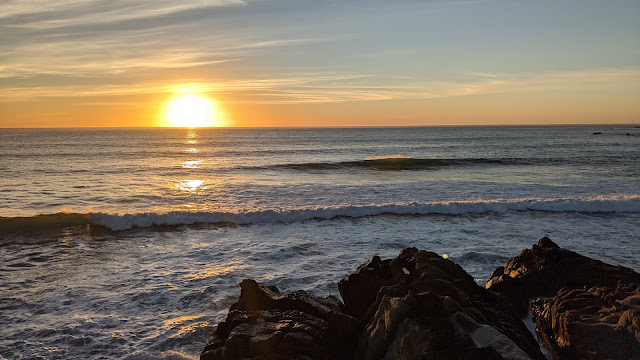 ... is something that humans have done since we noticed that it traces out a pattern in the sky over the course of a year. Of course, it's much easier to do this if you live on an open plain, where it's obvious that the sun sets and rises in a slightly different place each day. As mentioned, Stonehenge is famously aligned with the solstices and seems to have been used as a large astronomical calculating device. (Although how anyone in central England had enough clear and sunny days to make the calculations is actually beyond me.)
But our curiosity also runs to solar observations made in the Americas. What about the New World? When did similar solar observations start here?
That was the Challenge--can you find out?
1. When was the first observatory for sun-watching purposes created in the Americas? Can you find out who made it? Where is it? And what happened to those people?
I, like many of you, started with a simple, pointed query:
[ first solar observatory Americas ]
which led to a story from NPR (Oldest Solar Observatory found in Peru), the NY Times (Stone Towers Are Decoded as Earliest Solar Observatory in the Americas), and Space.com (Ancient Solar Observatory Discovered), and of course, the Wikipedia article.
If you read those stories carefully, you'll find they all point back to an article published in Science (and VERY high reputation journal) Ghezzi, Ivan, and Clive Ruggles. "Chankillo: a 2300-year-old solar observatory in coastal Peru." Science 315.5816 (2007): 1239-1243. (Link to full-text of the paper.)
The observatory dates to the 4th century BCE, or about 2300 years ago. It's 9 miles from the Pacific ocean on the eastern slope of a wide plain that gives a great 360 view of sunrises and sunsets. It's a place without many trees, a place where you'll learn what the sun does every day of the year. It's easy how one might come to view the sun as a god-figure. We know that the Inca revered the sun and built astronomical temples (e.g., Machu Picchu), but learning about this site made me wonder about the relationship between the people who built Chankillo (the Casma/Sechin culture) and the Inca.
In the above interview with NPR, the first author, Ivan Ghezzi said that:

"We know that the Incas made powerful political statements based on the relationship between the sun and the king... The Inca claimed to be the offspring of the sun. But now we have a society that is 1,800 years before the Inca that is clearly using the sun as a way to make a political, social and ideological statement."

The Casma/Sechin culture is amazing--they began around 3200 BCE and stopped around 200 BCE. There's not a lot of information about what followed the Casma/Sechin people; they seemed to be invaded by people from the mountains and just vanished into the mists of time as the Early Horizon (900 – 200 BCE) era ended... right around when Chankillo was built, and then abandoned.
The Inca, meanwhile, date from 1438-1533, just under 100 years. How is it possible that I didn't know about a pre-existing culture that lasted for 3 millenia? I'm sure I'll be reading more about this remarkable culture in the weeks ahead. (The Incas and Their Ancestor: The Archaeology of Peru. Michael Edward Moseley. 2001)
The Chankillo site itself is full of fascinating things. You can even use Google Maps to get a look at the site from the satellite images. The 13 pinnacles are arrayed on the back of a low ridge, looking like vertebrae that have been cut out of the stone:
If you zoom out, you can see that there's evidence of a LOT of other buildings and sites all around the area.

Most impressively, there's a large temple/fortress complex just to the west. This is interpreted as being a temple with defensive capabilities--a suggestion that even 2300 years ago, battles were being fought in this part of Peru. (There's some debate about whether these were actual battles or ritualized fights--whatever the actual interpretation, building this site was a lot of work in difficult environment.)

As Remmij pointed out, there's a GREAT video tour of the Chakillo site: If you're interested, check it out.
One of my goals was to quickly get a sense of the surrounding literature about Chankillo. My favorite way to do that is to find the most authoritative article (in this case, the original article in Science by Ghezzi and Ruggles), and then use Google Scholar to see what other works cite this paper. That is, I did this--searched for the paper in Scholar, and...

Which then gives me a list of other publications that cite this original work, usually extending it or giving new interpretations: 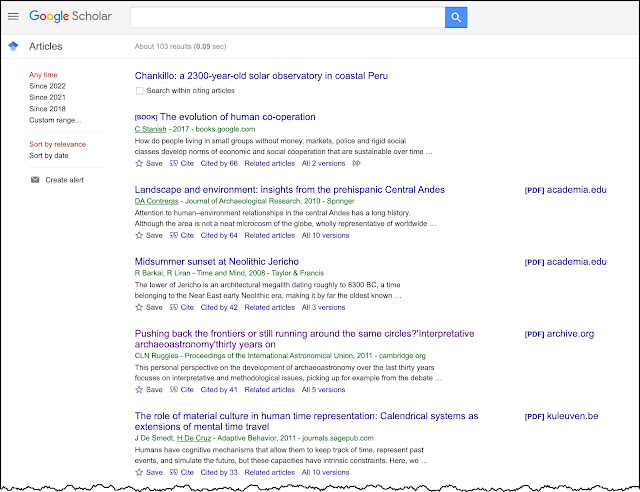 I then just opened a bunch of these papers in parallel ("lateral browsing") and then scanned through them, picking out the ones that were interesting and/or relevant to my interests.

1. When you're curious about something, take a look! In this case, Google Maps (or other aerial image sources, as we've discussed) can be a great resource for furthering your curiosity.
2. Looking "around" a topic can be done by looking at other works that cite the work that's most like what you're interested in. I tend to use the "Cited by" link in Google Scholar as a great way to look around. This won't give you news accounts, but it does link you to some of the surrounding literature that can teach you a great deal. (In my case, I'm going to start running down the mysterious Casma/Sechin culture!
Search on!