Answer: Where in the world am I?

Dan Russell • April 3, 2017
SearchReSearch
Republished with permission from SearchReSearch
Answer: Where in the world am I? Dan Russell
Even more details...
Often, as we do research (especially of the SearchResearch kind), the little details of the Challenge turn out to be important. This is especially the case when you're trying to figure out where a particular picture has been taken.

Learning to "read the details" of a photograph is a key skill for photoanalysis, and that's what the point of this week's Challenge is. Can you figure out where these locations are?
Here's what I did to figure out these 3 locations.

1. Where is this? (And aside from being a random street, what's important about this location?) 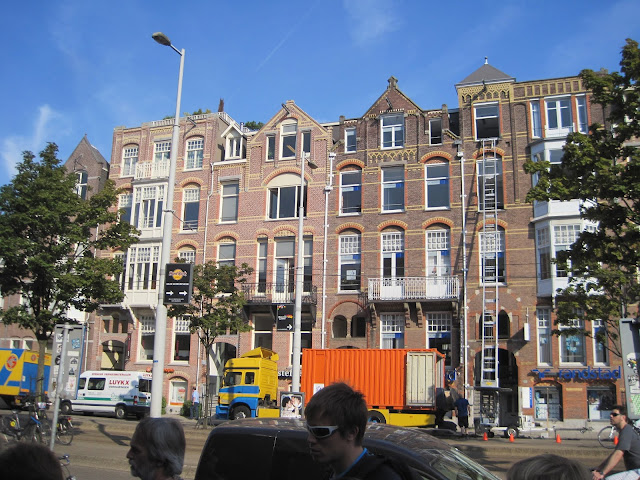 Okay, so THIS one is embarrassing.

If you right-click on this, you can "Reverse Image Search" and find that I've already used this picture in an earlier SRS post! If you read the SRS post "What am I doing?" from August 22, 2012 you'll find that this is the scene across the street from the Van Gogh Museum in downtown Amsterdam!

The method I talked about then was to look at the scene for clues. That's what I was hoping you would do this time. So... ignoring the early post, THIS is what I would do today.

There's an obvious sign on the street that suggests it's near a Hard Rock Cafe near the Leidesplein. (You just have to zoom in a bit on the image.) If you search in Google Maps for Leidesplein, you'll end up in central Amsterdam. If you then search for [Hard Rock Cafe] you'll find the exact location of that rock-and-roll themed restaurant in Amsterdam.

This is the map I see: 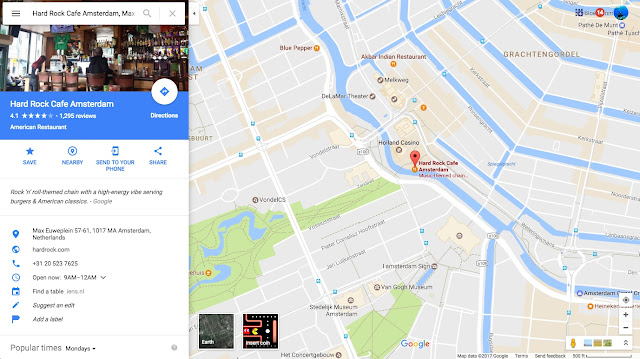 The next step would be to search the map for clue. Back when I originally posted this image, you could search for the Randstad offices near there. (See the blue sign for "Randstad" on the right of the image.)

Back in 2012, there were two Randstad offices. One of them matched the office shown in the picture, located in a brick building.

But this is no longer true! NOW what?

Look at the picture. What else can you see?

There's a sign for the "Holland Casino." A quick search on Maps shows us that's near the Hard Rock Cafe, so that doesn't really help.

Almost everything else is covered by trucks, cars, and people.

To solve this SearchResearch Challenge now--in April 2017--you have to do something a bit more clever. (Let's ignore the answer from 2012 for a moment.)

If you look between the yellow truck and the orange container, you can make out part of a sign. It's "stef?s" (where the ? means a character or two that I don't know because it's blocked by the lightpole).

As you know, Google doesn't do partial-word matching.

BUT... that doesn't stop us from using autocomplete in Maps as a kind of partial-word matching tool!

Look at this. Here, starting with the map centered on the Hard Rock Cafe (Amsterdam), I started typing the letters I can see in the image: 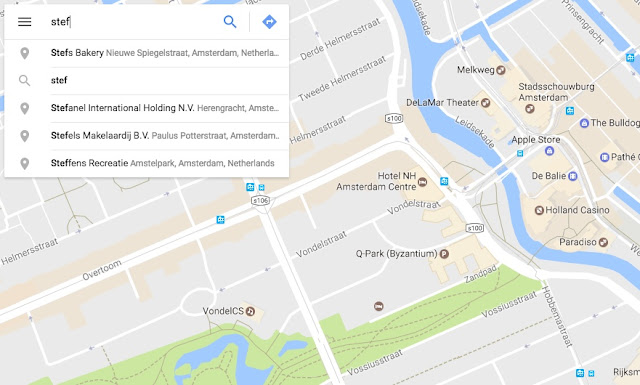 What I'm getting (as I type) are all of the business names in the area that start with my query fragment. At this point, it's just "stef"--but as you see, there are a few places that begin like that. These are all possible place (or business) names in the area.

When I click on each hit (such as "Stef's Bakery" in the #1 position), I can quickly rule out the possibilities. Stef's Bakery, for instance, is in a tiny street, nothing like the picture.

I clicked on a bunch and found nothing.

So I went to the next possibility: "stefa" ... like this: 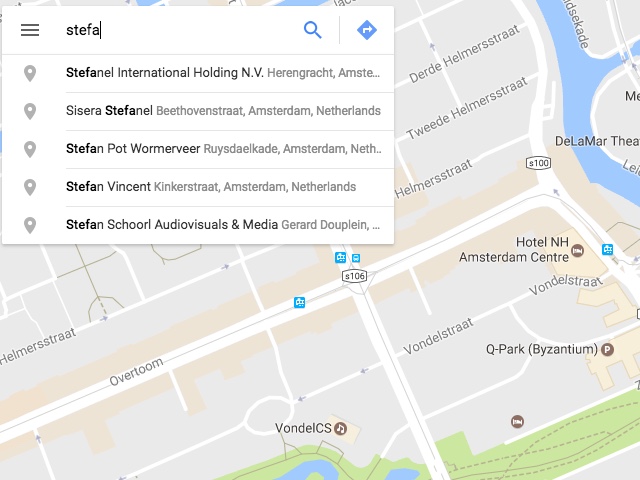 Next one: "stefe"(changing the "a" at the end to an "e"... I'm just working my way through the vowels. I strongly suspect that the next letter after the "f" in "stef" is a vowel.

Look what we have now with the "stefe" partial word search: 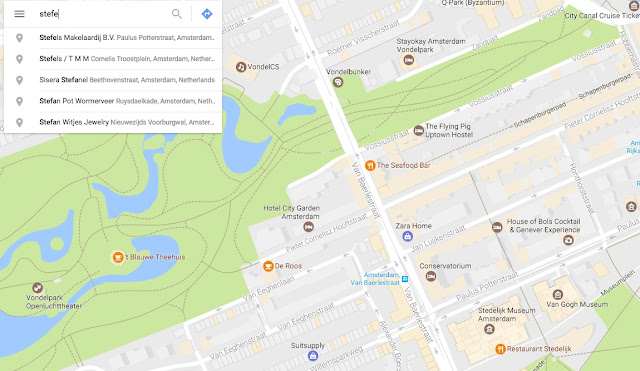 And when I click on the first hit here ("Stefels Makelaardij B.V.") I see something really interesting... notice the brick building shown in the Streetview preview just above the name of the company. That looks a lot like our picture above! 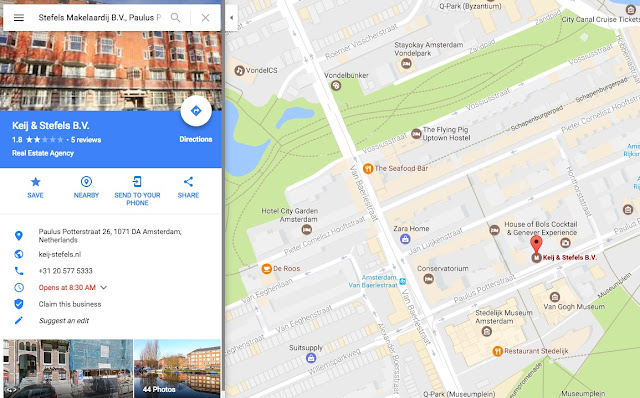 When I drag and drop the pegman to that red balloon, it takes me to THIS view of the street: 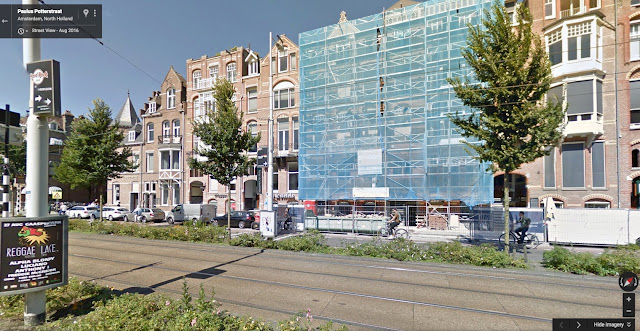 Amazingly, I see the Hard Rock Cafe sign AND the Holland Casino sign just as in the original image.

If you look carefully (just to the left of the scaffolding), you can see more of the sign (something & Stefels). By looking at the buildings, you can confirm that this is the same place... the picture and the Streetview look very, very similar.

So now, just take a look around using Streetview to try and figure out "what's important about this location."

Once you look behind you, it's clear: This is the location of the Van Gogh Museum in Amsterdam. 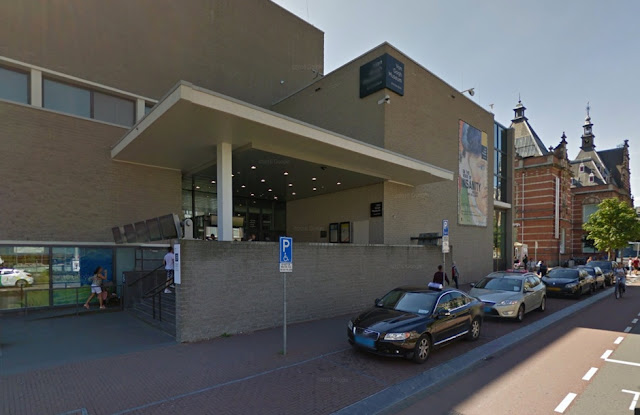 And we've learned a new method for finding locations, even when the information is only partial (or out-of-date).

BTW, Google Streetview also has excellent interior Streetview for the Museum. Just zoom in close to the museum, then drag-and-drop pegman into the museum for views like this: 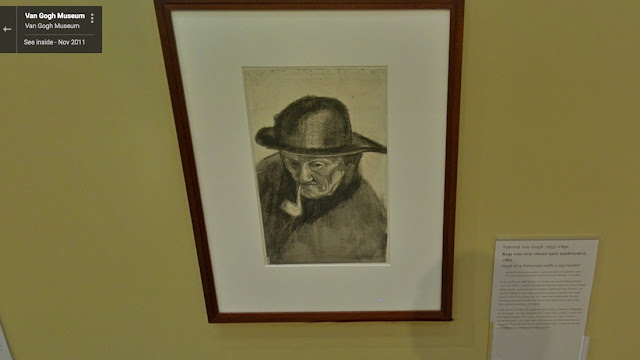 2. Where is THIS? More to the point, what building is this? 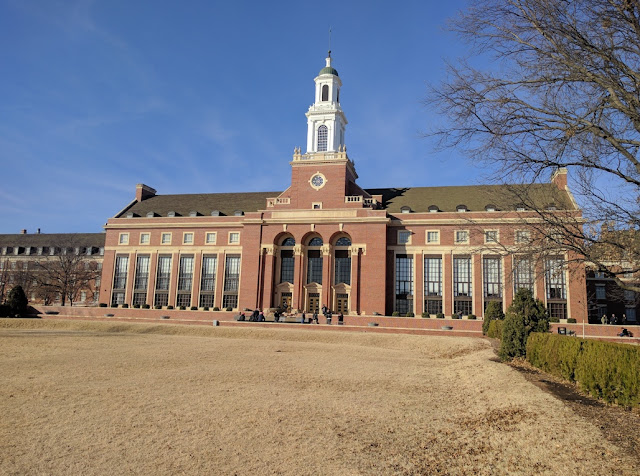 The key to solving this Challenge is to realize that Search-by-Image doesn't work well with the whole image, but cropping the image to the most probably photographed part does work.

What do you think everyone who takes a photo here shoots? Probably the tower.

I cropped my image to just the tower, like this: 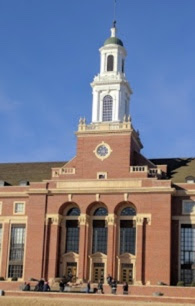 If you Search-by-Image for that, you quickly discover that it's the Edmon Low library at Oklahoma State University in Stillwater, OK. (Wikipedia entry for the Edmon Low Library)

What amazes me about this search is that there are thousands of library towers that look pretty much like this one. But there's enough variation among the towers that Search-by-image can tell them apart.

3. Finally, where is this... and what's interesting about this particular view? 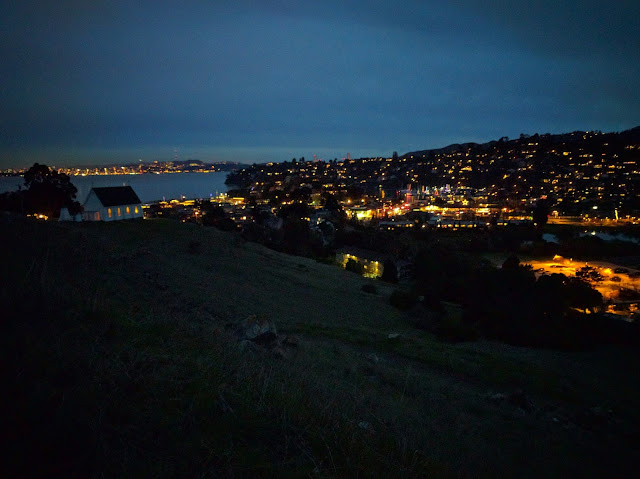 Okay... I played a little trick on you this time.

Of all three of the images in the Challenge, this was the only one that still has its metadata.

Just because the other 2 images were missing the EXIF metadata, you shouldn't assume that this one is missing it as well.

(If you don't know what EXIF metadata is, you can learn about it here at my earlier post about it.)

If you look at the Map for that location, you'll see that I was standing in an open field. 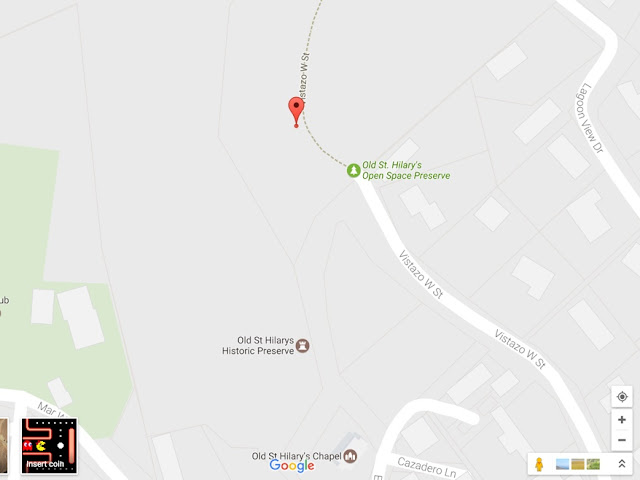 And if you look at the satellite view for that location, you'll see that it's on a hillside, and that there's a chapel (with a cross) directly south of the photo location. 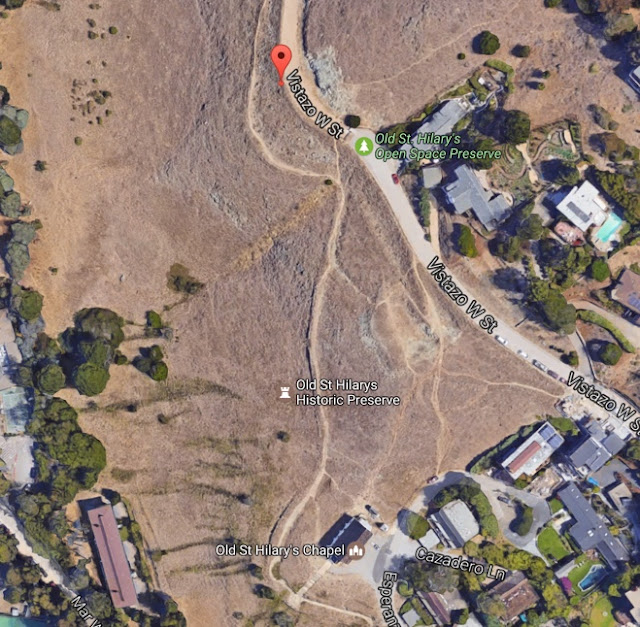 Switching back to Map view, you can see that the very end of Vistazo W St. has a Streeview.

I grabbed that image, and put it side-by-side with the photo to see if they're really the same. 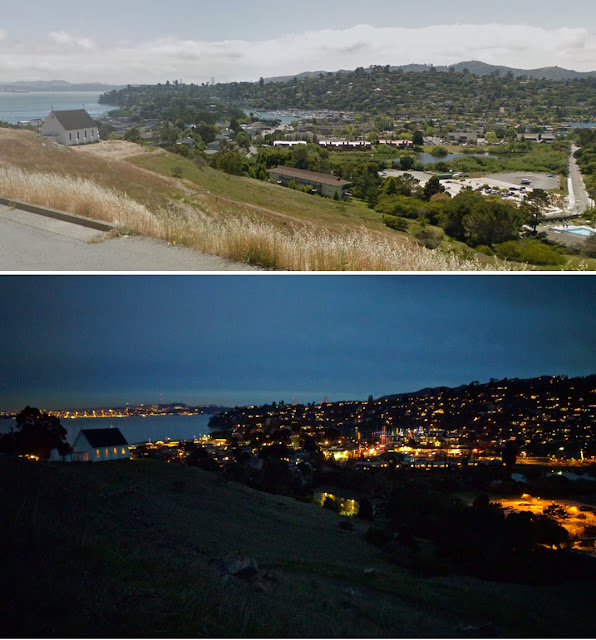 It's clearly the same view (although with different focal lengths on the cameras).

The question was "what's interesting about this particular view?" You can read the answer off the map by zooming out just a bit... Here I've added a couple of sight-lines so you can see the view taken in by the nighttime photo. 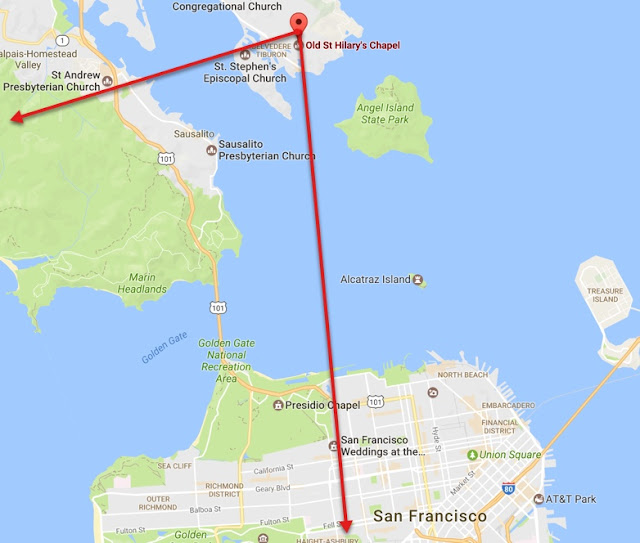 If this is correct, then we should be able to see the top of the Golden Gate bridge in the original photo.

Zoom in a bit, and yes, there they are, peaking over the ridge. 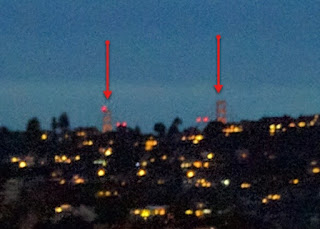 It was a beautiful evening, which is why I couldn't resist taking the picture. But SearchResearchers ask questions. And Regular Reader Remmij asked a great question:

"..… what was Dan doing out there in the dark… trail run? attending a wedding?,a presentation at SFSU? dinner at the Tiburon Tavern? testing the camera on his Nexus for low light capability?"

Those are all great guesses, but Ramón was able to answer the question by using the EXIF metadata!

By taking advantage of subject of the photo (the cute little chapel with warmly glowing windows in the lower left), Ramón did a search for:

and correctly found a concert poster for the a cappella group, Musae. They had a concert at 4PM. The poster also says that there is no on-site parking at St. Hilary's, so I probably parked on Vistazo Street and walked on the trail after the concert.

Which is what I did.

1. Consider the possibility that what you're working with is out-of-date. That was definitely the case with that photo. As we found, it was from 2012, and almost all of the stores had moved away. Luckily, one did not, and we were able to work forward from there.
2. Think about using partial information by checking possible combinations. In the first Challenge, we had some great information (the name of a business, "Randstad") but that WAS out-of-date. We had some location information from the "Hard Rock Cafe" and "Holland Casino," but not enough to pin-point the location. We had to use just PART of a business name. Luckily, by using the Maps auto-completion feature, we were able to try a couple of options (by changing the last letter) and were able to fairly quickly find a combination of letters that led to the exact place.

3. Just because the first 2 don't have EXIF, don't give up! Clues, like images, come from all over the place. Sometimes the data is a little unexpected. You have to keep trying all of the best options first. If they don't work, then go to a more sophisticated method (but don't forget the obvious first).


Hope you had as much fun as I did with this.