Answer: When do you need to provide context?

As you know by now, the most common answer to a SRS Challenge is "it depends." What does it depend on? A: Context.
Gee, thanks! 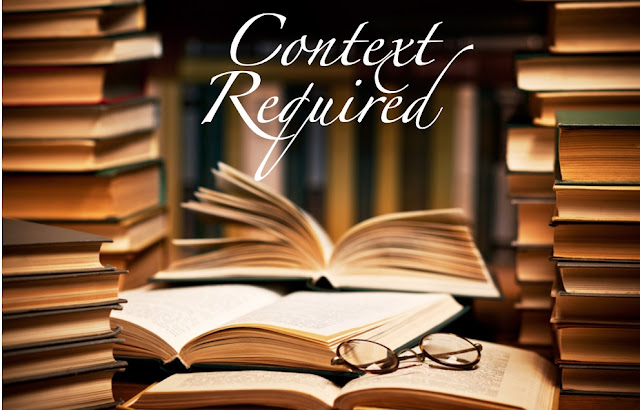 As you'll see below, context is all of the information surrounding the question and the answer. You can't define it ahead of time because the context varies from situation to situation. It's the other information you need to make sense of the question and answer.
While these all seem like fairly straightforward Research Questions, I want to you think a bit about the context surrounding each of these. What do you need to do to contextualize the RQ and the answer you give?

Let's talk about context in the case of these three Challenges.

1. How many countries are there in the world?

So, the obvious query here is:
[ how many countries are there ]
The Google response is: 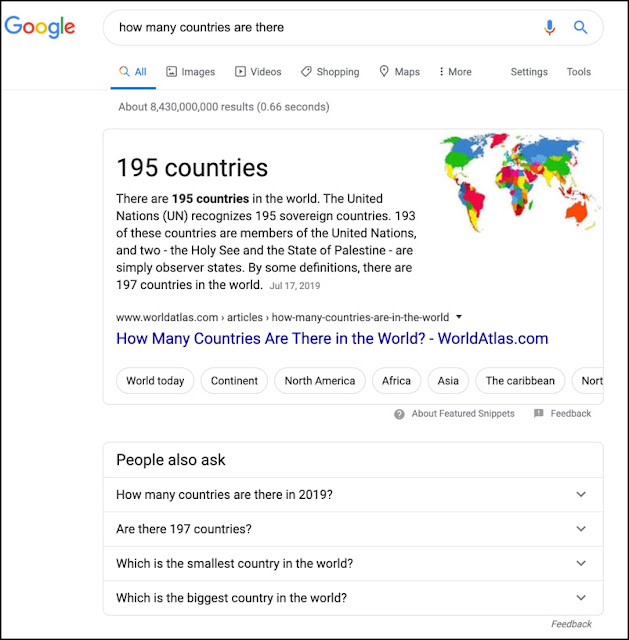 You might be tempted to say the answer is 195, but the diligent and careful SearchResearcher would notice something here--something in the additional information on the page that provides a bit of context to the answer.
Look under the "People also ask" section and notice the top two questions, "How many countries are there in 2019?" and "Are there 197 countries?"
Already we see that there's some clarification and nuances that we need to take into account.
a. what's the definition of "country"?
b. looks like the number of countries
varies by time...
If you click and open those two "also ask" questions, you see a bit more context information: 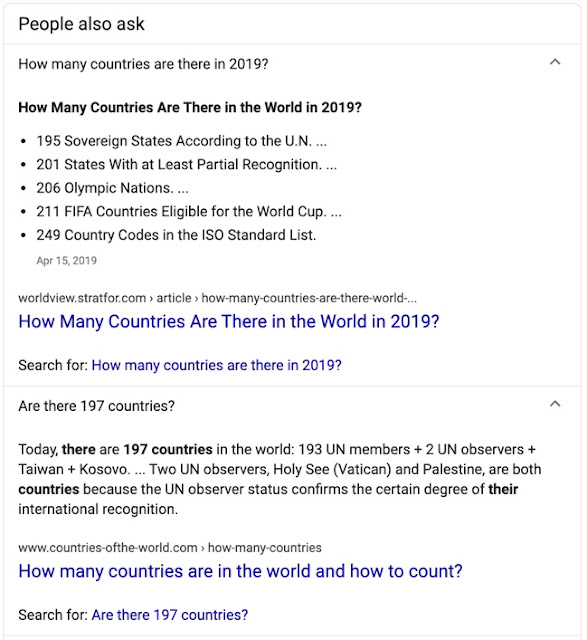 The first question points out the difference between "Sovereign states" and "State with partial recognition."
The second question claims 197 countries + 2 UN observers (Vatican and Palestine) + Taiwan + Kosovo. Importantly, it makes the point that this number changes by time. What's true in late 2019 might be different a year later... or whenever it is that you ask this question.
So... what defines a country? (Answering this question will be important for later questions as well.)
Let's look at the first article link (an article by Strafor Worldview, a geopolitical analysis company). In this article they put out this analysis of what defines a country, carefully noting that there are least 6 different (and equally valid) ways to define a country:
..."Country" and "nation" are casual words for what political scientists call a "sovereign state," meaning a place with its own borders and completely independent government. The question of which places count as sovereign states can be controversial, but for starters we normally count all the member and observer countries of the United Nations (U.N.):
U.N. members: 193
U.N. observer states: 2
Total: 195
These countries mostly all accept each other as sovereign states, and they're the ones you'll see on most world maps and lists of the world's countries. Almost every country you've ever heard of is probably a member of the U.N., and the two U.N. observer states are Vatican City (represented by the Holy See) and Palestine. If you want to know the names of all 195, Wikipedia has a complete list.
The last addition to the list was in 2012, when Palestine became a UN Observer State, and the last time the number of full U.N. members changed was when South Sudan joined in 2011...
It's interesting to notice that the Wikipedia page lists 206 total nation-states with 193 UN member states, two observer states and 11 other states.
Clearly, the definition of nation is a political topic, subject to many points of view. In particular, the Other category on the Wikipedia page includes lots of special cases. There are many places we think of as countries (e.g., Bonaire), but are actually part of another country (in this case, the Netherlands). Likewise, American Samoa, Guam, and the US Virgin Islands are all territories of the US and not independent countries.
Then there are the complex and messy politics of places like North and South Korea. North Korea claims that South Korea is part of its territory (and vice-versa, South Korea claims North Korea as part of its territory). North Korea is recognized by the UN, but not recognized by France and Japan. Or are Palestine and Israel both countries? Palestine has no official borders, while Israel isn't recognized by some 32 other UN member countries. It's complicated...
The important point for SRS is that the context of this question includes (a) the definition of a country, (b) what counts as a recognizable country, and (c) who's doing the recognition? Is it the UN (195), is it countries that have partial recognition from other UN members (201), is it self-declared countries such as Artsakh (Nagorno-Karabakh), Transnistria, and Somaliland (204), or what?
Bottom line: There are many answers depending on your definitions and who is doing the counting. In other words, the context here is necessary to understand what's being counted and why.
So while I could say "there are 197 countries," the better answer is to say something like "According to the UN there are 195 countries + 2 observer states (Vatican and Palestine)." And, of course, give links/references for where you found your data. Oh, and of course you'll say when this count was taken, right?
2. What's the smallest country?

You can see where this is going--after we've defined "country" now we need the context around what "smallest" means. Do we mean population? Area? GDP?
Let's just use area as the determiner of "smallest."
[ smallest country in the world by area ]
directs us to the Wikipedia list of countries and dependencies by area, listing the Vatican at 0.44 square km. But is it really a country, or merely an "observer"? The second smallest on this list is Monaco at 2.02 square km. It's recognized by the UN as a legitimate country and votes regularly.
Interesting side-note: If you look at the area of "self-declared sovereign states" you have to also include Sealand, a World War 2 platform in the North Sea off the east coast of England that has declared itself a separate country. It has an area of only 0.004 km2, but isn't recognized by any other country.
Here, the context is fairly straightforward--it's just that you need to pull in the context around "what defines a country" in order to have it make is understandable.
3. How many languages are spoken in India?

Just as we had to provide some context for the definition of country, we're going to have to do the same for language. What's a language after all?
Let's start with the obvious query:
[ how many languages spoken in India ]
Alas, the current answer given by Google in reply to this is clearly incorrect. It says two, which is clearly the number of official languages, not the number of languages spoken in the marketplace. (Trust me, when you're in India, you're going to hear a LOT more than 2 languages.)
But even this is somewhat confusing. Article 343 of the Indian constitution says that the official language of the Union should be Hindi in Devanagari script (instead of the very commonly used English at the time of enactment), connecting both a language with its written form. Later, a constitutional amendment, The Official Languages Act of 1963, allowed for the continuation of English alongside Hindi in the Indian government until the legislature decides to change it.
On the other hand, if you ask Bing, you get a very different answer. They take a much more "what's commonly spoken" approach: 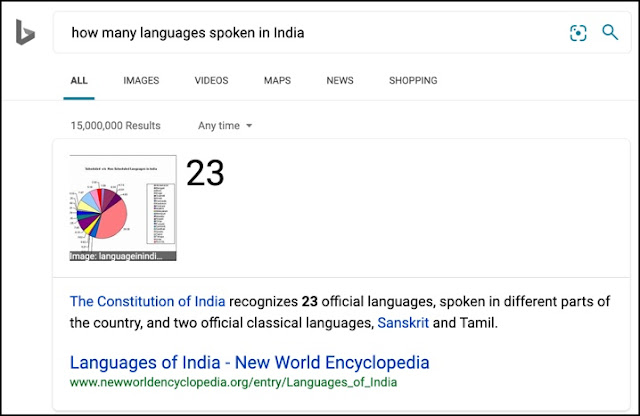 This makes more sense to the common meaning of "languages spoken in India." The Eighth Schedule of the Indian Constitution lists 22 "scheduled" languages. That is, these are the languages given recognition, status, and official encouragement. In addition, India recognizes several "classical" languages (Kannada, Malayalam, Odia, Sanskrit, Tamil and Telugu) that are recognized as culturally important. see: Wikipedia article
And if you check Wolfram Alpha, we see yet another, very different answer: 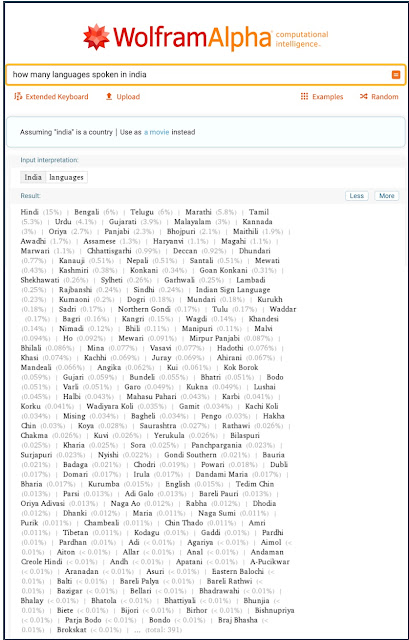 I got this page of results by clicking on the "More" button several times they list a bunch more languages, with a total of 391! Interestingly, they list even rather small languages--the last in the list shown here is Brokskat (AKA Brokpa, Brokpa of Dah-Hanu, Dokskat, Kyango, Dardu, Hanu), which has only around 3000 speakers (according to EndangeredLanguages.com).
According to the Census of India of 2001, India has 122 major languages and 1599 other languages. But, due to differences in definition of the terms "language" and "dialect," these numbers are subject to some interpretation. That census recorded 30 languages spoken by more than a million native speakers and another 122 which are spoken by more than 10,000 people. (See the India language census of 2001.)
And of course both Persian and English are very important languages (both historically and in use today to varying degrees).
So... let's get to the bottom line: How many languages are spoken in India? Officially, 2; although in reality, probably around 1700, but many of those are "smaller languages" with less than 5,000 speakers.
From the Wikipedia article on Indian Languages:

According to the most recent census of 2011, after thorough linguistic scrutiny, edit and rationalization on 19,569 raw linguistic affiliation, the census recognizes 1369 rationalized mother tongues and 1474 names which were treated as ‘unclassified’ and relegated to ‘other’ mother tongue category.[42] Among, the 1369 rationalized mother tongues which are spoken by 10,000 or more speakers, are further grouped into appropriate set that resulted into total 121 languages. In these 121 languages, 22 are already part of the Eighth Schedule to the Constitution of India and other 99 are termed as "Total of other languages" which is one short as of the other languages recognized in 2001 census.

Is that enough context for you?

Context is all the information that you need to interpret what you've found. Clearly, this varies from person to person and RQ to RQ. But in general I've found that searchers are far too willing to give just a basic, bald answer, and not enough context to understand the nuances.
One big lesson:
1. Find and provide the context! It's not always the case that more context is better, but you, as a discerning SearchResearcher should be able to explain (A) the definitions of the terms used in your questions and the results you've found, and (B) how the data was gathered and analyzed.
Whenever you search for some kind of answer to a question, think to yourself--What kind of context do I need to have in order to really understand what I find? And if you're in the business of giving answers to Research Questions from other people (e.g., reference librarians or intelligence analysts do), your answer is incomplete if it does NOT HAVE the context around it.
Search on, contextually!