Answer: When did which colors signal gender? 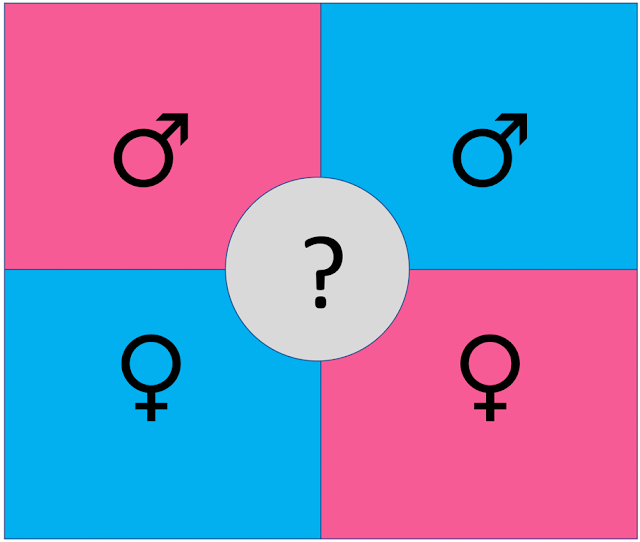 ... these days, in the US at least, the colors of pink and blue have commonly-agreed upon gender meanings. Pink means female, blue means male. But as a friend asked recently, why?

Regular Reader Arthur Weiss seems to have a lock on my search intuitions. Like Arthur, my first search was
[ pink blue colors gender history ]
Which led to the unexpected finding that blue once signified female while pink signified male!
As Arthur pointed out, "this topic is so surrounded in gender politics I wanted a range of sites to feel certain." Excellent point. Whenever you're searching on a contentious topic, you want to get a spectrum of perspectives.
I first read the Smithsonian article, When Did Girls Start Wearing Pink. In this article, Jo B. Paoletti, a historian at the University of Maryland and author of Pink and Blue: Telling the Girls From the Boys in America... [points to] a June 1918 article from the trade publication Earnshaw's Infants' Department which says that, “The generally accepted rule is pink for the boys, and blue for the girls. The reason is that pink, being a more decided and stronger color, is more suitable for the boy, while blue, which is more delicate and dainty, is prettier for the girl.” Other sources said blue was flattering for blonds, pink for brunettes; or blue was for blue-eyed babies, pink for brown-eyed babies, according to Paoletti. She goes on to say that pink became the preferred color for girls sometime in the 1940s.
There are several other articles that support this timeline and argument. Weiss points out that the GenderSpectrum website goes even further, saying that blue/pink only became gender specific at the start of the 19 century--before that it was a neutral, unisex white. It was only around the time of World War I that the colors of blue and pink became more gender specific.
Arthur mentions research by Marco Del Guidice using a database of five million books printed in American or British English from 1800-2000 where there was a lack of any mentions of “pink for a boy”, even though from 1890 onwards there were increasing mentions of “pink for a girl”.
This got me to thinking, could I find evidence in the historical book collection at Books.Google.com? At the Books site I did a bit of filtering by Custom Time Range (in the example below I'm searching from Jan 1, 1900 - Jan 1, 1918 and using the AROUND operator to find the term blue near boy (and then did the same for pink and boy, then blue and girl, then pink and girl).

As you remember, the AROUND operator searches for the first term ("blue") within 5 terms of the second ("boys"). That number (5) is the "radius"--that means a matching term is either 5 before the other term, or 5 behind it. I believe the maximum radius is 10 (but I have to check that).
In just a couple of minutes of searching, I was able to find multiple hits (far more than Del Guidice did, apparently). Here are a few, the first shows how, in 1919, pink was for boys and blue for girls:
[Sara Lee said] “…I’ve put a blue bow on my afghan. Pink is for boys…” from The Amazing Interlude, Mary Roberts Rinehart, 1919 - ( p 15)
However, just six years later we find:
“What is the proper colour for boy babies? I want to make a little sweater for a baby that has just arrived. Blue is for boys: pink for girls.” The Golden Book Magazine Volume 2 (1925)
and...
“Whether the child is a boy or girl sometimes determines the color the mother will choose. For infants, pink is used for boys, blue for girls…” (p 88) Merchandise Manuals for Retail Salespeople: Infants and children's wear By Werrett Wallace Charters · 1925
Arthur also found the wonderful Wikipedia article on Pink and Blue as Gender Signifiers (which is basically a long list of dates, colors and genders). As is shown in that list, there are no sources saying pink for boys past 1941. But that list also shows that the color/gender assignments were not very fixed before--it was possible to find color assignments going both ways.
However, after 1941, things seem to have settled into the current standard: blue for boys, pink for girls. (It sure took a while to get there!)

2. And, if I remember correctly, young boys used to wear dresses (or some kind of gown) in their early photos. When did that practice stop? (Or has it?)

I have to admit that I did the Wiki shortcut:
[ dresses for boys Wikipedia ] This took me to a link to the Wikipedia article on breeching which discusses why boys wore dresses. Bottom line: it's easier when they're infants), and when this clothing pattern stopped, as with the color coded gender, around the time of the First World War.
As the Wiki article pointed out, traditionally, switching from dresses to breeches "was an important rite of passage in the life of a boy, looked forward to with much excitement, often celebrated with a small party. It often marked the point at which the father became more involved with the raising of a boy."

According to an article by Kaushik Patowary in Amusing Planet "It wasn’t until the end of the First World War, that parents began to dress their child according to their sex. But as the 20th century progressed, gender distinction once again declined as parents began to clothe their child androgynously in t-shirts, jeans, sweatshirts and sneakers."

1. For contentious topics, be sure to get multiple sources and compare/contrast their evidence. Anything involving gender and signifiers of gender is going to get complicated. Here, I looked at around 10 different pieces of content before writing this up. Be sure to cross-check!

2. When searching for evidence of change across time, Books are a great resource--especially since you can filter by time range.

3. The AROUND operator works in the Books corpus as well. With AROUND, you can find the pieces of evidence you seek, with words appearing near to each other in the text.