Answer: What’s the unexpected connection between these two?

You never know what you'll find when you go for a run (or walk) at different places. In particular, there are often fun and unexpected connections between different places and people.

This Challenge is about finding the connections between the two men depicted below.

In my clues I said... that these two gentlemen had dinner together once upon a time, while they were sworn enemies at the time. Excuse me? What's up with this?

1. Who are these two gentlemen?

Just zooming in on the gravestone images you can read that this is the gravestone of Major General Robert Ross. "After having distinguished himself in all ranks as an Officer in ..Italy, Portugal, Spain, France & America... was killed during the commencement of an action..."
A quick search brings up many articles on him, including an interesting observation that he is best known for the Burning of Washington, which included the destruction of the White House, The Capitol, and the Library of Congress on August 24, 1814. If you read carefully, you'll see that he was buried here on September 20, 1814... but that he was killed-in-action on September 12, 1814. (And, the story goes, he was transported from near Baltimore, where he was killed, to Halifax, Nova Scotia, in a barrel of rum. It was a busy summer for him...)
By looking at the EXIF metadata on the second image, you can pull out the lat/long (where I was standing when I took the picture): 38.904853, -77.068136. Putting that into Google Maps tells you that I was at Francis Scott Key park in Georgetown, just up the Potomac River from the White House.
Francis Scott Key is the gentleman who penned the poem that became the lyrics for the US National Anthem. (You remember from an earlier Challenge that the tune for the anthem is an old drinking song, To Anacreon in Heaven.)

2. When / where / why did they have dinner together?

To search for this, I did the obvious query:

... and found several pages that tell us that they had dinner together aboard HMS Tonnant,

".. It was aboard the Tonnant that the Americans Colonel John Stuart Skinner and Francis Scott Key dined with Vice Admiral Cochrane, Rear Admiral Sir George Cockburn, and Major General Robert Ross, where they negotiated the release of a prisoner, Dr. William Beanes. After his release, Skinner, Key, and Beanes were allowed to return to their own sloop but were not allowed to return to Baltimore because they had become familiar with the strength and position of the British units and knew of the British intent to attack Baltimore. As a result, Key witnessed the bombarding of Fort McHenry called "The Defense of Fort McHenry," later named "The Star-Bangled Banner."
- Searching for the Forgotten War - 1812: United State of America.

3. And why is the night of their dinner such a memorable event?

This is a bit tricky. What evening was their dinner?

If you read the preceding paragraph, you'd (naturally) assume that these gentlemen had dinner, then Skinner, Key, and Beanes went back to their sloop to watch the bombardment of Fort McHenry.

But that would be wrong!

If you look up:

you'll find that the battle (that is, the all-day-all-night bombardment from the British ships) happened on September 13-14 starting at 6AM.

But wait a second! Wasn't Robert Ross killed on September 12? (That's what his gravestone says, and that's what all of his biographies say!)

To answer this question, I looked in Google Books for that same query we used before, looking for books on that would tell the story. (I was hoping for a book that would give a detailed chronology of the last few days of Ross' life.)

And I found it: In What So Proudly We Hailed: Francis Scott Key, A Life, by Marc Leepson (and a few others), I found that this fabled dinner took place on September 7th, at the mouth of the Potomac River, which isn't exactly near Fort McHenry. 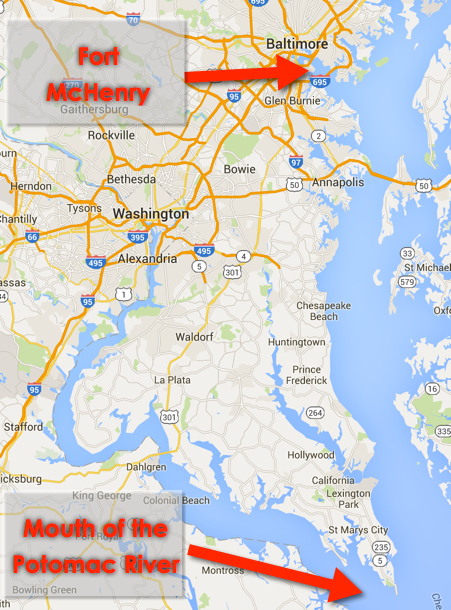 In Leepson's book, "... the three Americans were first escorted to the British frigate Surprize, under the command of Admiral Cochrane's son, Sir Thomas Cochrane. On September 10, Key, Skinner, and Beanes were allowed to return to the President, accompanied by British marine guards. The Surprize towed them into Baltimore Harbor, about eight miles from Fort McHenry, behind the fifty-ship British fleet, where they dropped anchor. They spent the next four days there..."

And in the meantime, Robert Ross led his expeditionary force onshore at North Point, trying to run around the flank of the Americans in Baltimore.

As this map shows, Key was anchored a few miles offshore with a great view of Fort McHenry, but Major General Robert Ross was slogging to the north with his ground forces, ultimately being killed by a sniper

So... why was their dinner such a memorable event?

Well, it really wasn't... other than that Francis Scott Key and John Stuart Skinner managed to get Dr. Beanes free by negotiation.

But in the process of hanging out aboard the British ships, they knew too much, so they couldn't just be sent back to spill the beans (so the speak), but had to be kept on board for 4 more days while the British paid attention to Fort McHenry while trying to take Baltimore.

The Brits really wanted to take Baltimore, which they referred to as a "nest of pirates" for the Baltimore Clippers (a kind of fast ship) tendency to raid, size, and sink British ships while on the high seas.

But it didn't work out... the dinner lead to a successful prisoner negotiation, and the US has a national anthem as a side-effect.

1. I've said this before, but it constantly bears repeating: READ CAREFULLY!
I have to admit that I misread these passages when I was first writing up the Challenge method. I (like several Regular Readers) jumped to the inference that the dinner was the same night as the famous attack. It was only when I was writing up the answer that I noticed that Ross died the day before the bombardment, and Key's writing of the poem.

2. A useful trick to get to a deeper understanding is to write up a mini-essay that presents all of your information. I'm 90% convinced that having to write something down (and have that writeup make sense) is a great method to making sure that all of your ducks are in a row. If you're being honest with yourself, you'll pick up all KINDS of mistakes in your reasoning and data (such as when it seemed that Robert Ross was killed before the date I'd assumed was the day of their dinner!).

I'll just repeat my two Search Lessons from above.

But more generally, there are lots of historical events that can stand a bit of closer inspection. In particular, looking for the sequence of events over time can be really illustrative. One trick to making compelling lessons is to find something that links to a REALLY important (at least to your students) event.

Where ever you're a teacher, look for the local connection. In Albuquerque, for instance, what were the big political issues for Spain (which owned much of the American southwest) in the year the city was founded (1706)? What connections can be made between the political situation in Spain and in New Mexico at the time?

History is fascinating, but it's also worth close study because it's easy to jump to an inadequately supported conclusion!