Answer: What’s the story with these things?

Dan Russell • May 15, 2019
SearchReSearch
Republished with permission from SearchReSearch
Answer: What’s the story with these things? Dan Russell
Where was I?
This week's Challenge is another in our series of "What's the story?"
This week's Challenge wasn't difficult in the ordinary sense. (I figure that you'll be able to search out the place and name of the things.) But these questions give us a chance to dig into the remarkable stories that are associated with these places.

Here's what I found, and how I found it.
1. I saw this remarkable beast of a device that's labelled as "Clydeport" just across the river from where I'm staying. I can figure out what it is, but I know nothing of its genesis or why it's there? Can you search out the story? (Here I've pasted a small image so the SRS page will load quickly. But here's a LINK if you'd like to download the whole image.)
I recognize that shape as a crane, used for loading and unloading ships. So I just did:
[ clydeport crane ]

and quickly found the Wikipedia article on the Finnieston Crane. That article tells us that:

"...The Finnieston Crane or Stobcross Crane is a disused giant cantilever crane in the centre of Glasgow, Scotland. It is no longer operational, but is retained as a symbol of the city's engineering heritage. The crane was used for loading cargo, in particular steam locomotives, onto ships to be exported around the world. It is one of four such cranes on the River Clyde, a fifth one having been demolished in 2007, and one of only eleven giant cantilever cranes remaining worldwide. The crane can be seen in the background of news broadcasts from BBC Pacific Quay."

Naturally, I checked a few other sources by doing the query:
[ Finnieston crane ]
finding the port's own website in the process. Their page about the crane also tells us that:

"...A noticeable peculiarity of each lateral movement [of the crane] was that it was not continuous, but took place in gentle jerks of a few inches at a time. The object of this is to prevent the load at the end of the cables acquiring a swinging motion, which would soon render the accurate placing of any load a matter of great difficulty and danger...I saw the heavy machinery ... placed in a few minutes into a space where there was hardly an inch to spare on one side or the other, all the directions during this delicate operation being conveyed to the craneman by signs, and blasts on a whistle..."

Having been a swamper to a crane operator (job description) in my youth, I can attest that this is a great property for a big crane to have. When you're the swamper directing a crane, the operator often can't see where the load is supposed to land (e.g., inside the belly of a ship). Stability and accuracy are key to getting this job done safely. A mistake of a couple of inches can make for a very expensive (or deadly) disaster. To be able to drop a locomotive inside of a ship with an accuracy of a few inches is quite an achievement.
To check up on this claim, I followed the link in the Wikipedia article references to the book Imperial Cities: Landscape, Display and Identity. In this book we learn that the locomotives were dragged from their assembly plant to the dock by using Clydesdale horses is particularly remarkable. (Just to remind you, Clydesdale horses are named for the county of Clydesdale, which is the old name for the current county of Lanarkshire, noted for the River Clyde running through it, which is where Glasgow is. These aren't just horses, they're very strong local horses.)
Here's the only photo I could find of a horse pulling a train car (although I can't tell where it is). Apparently there aren't any of Clydesdales pulling locomotives through the streets of Glasgow, although I wish I could find one. (Any SRS Readers in Glasgow know of one?) . 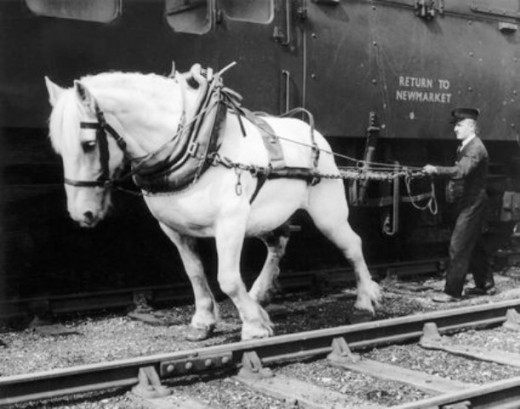 And here's the crane in a shot from BBC Scotland (see arrow). 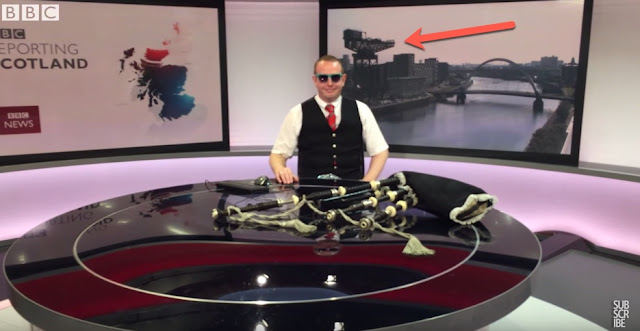 2. About 1/2 mile away from this thing is a slightly mysterious building. It has a nice Italian restaurant on the bottom floor, but this building was clearly NOT designed to be an Italian restaurant. This kind of mismatch makes me curious. What is this building? And what was it originally designed to do? LINK to the full image.
As many SRS Readers did, I used what I had and searched for:
[ la Fiorentina building Glasgow ]
And much to my surprise, this leads to the restaurant's website that claims:

"La Fiorentina occupies the ground floor of the landmark Angel building at Paisley Rd Toll. Famous throughout the city as Ogg Brothers Drapery Warehouse... Look up and you’ll see a gilded angel known as “Commerce and Industry” reaching into the sky. The sculpture was commissioned as part of the original building in 1889 and was probably the work of James Alexander Ewing...."

This is great, but again, I want to triangulate this claim and find a very different source for it. My next query was for:
[ James Alexander Ewing angel ]
which led to multiple hits. My favorite was Glasgow Sculptors, which repeats another variation of this story, and tells us that James Alexander Ewing also made a rooftop angel at 520 Sauchiehall Street. A quick trip to that location using Google Streetview and I have these two angels side-by-side: 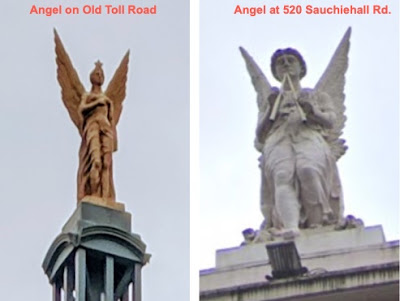 You can see a decided similarity in style (especially in the angle of the angel's wings, the odd notch in the trailing edge of the wings, and the style of the cloth around the legs).
But there were others, including the Evening Times of Glasgow's article about the Angel. On the other hand, a book about the sculptures of Glasgow, Look up Glasgow, confirms that this building is at 2-20 Paisley Road but lists the sculptor as unknown. (It also asks "why is there a star on this angel's head?"--great question.. don't know... another SearchResearch Challenge in the future?)
On the other hand, Regular Reader Jon (the Unknown) found a great drone flyover video of the building. One frame from that building shows the angel in from an angel's perspective (as it were):

1. As usual: Work with what you have. The big sign saying "Clydeport" and knowing it's in Glasgow is a big tipoff. From that we can work the story forward, finding its history, current disposition, and some surrounding stories for context.
2. Working forward. In the case of the Angel building, once again, working forward from the restaurant name to the history books leads to a more-or-less consensus about the sculpture (1899, by Ewing), and what the building's original purpose (as a draper's shop and storage). But we need to have some occasional flashes of insight, as when SRS RR Jon suggested looking in the British Newspaper Archive. (Free, but requires a login.) You can read a lot about the Oggs' shop in Glasgow. 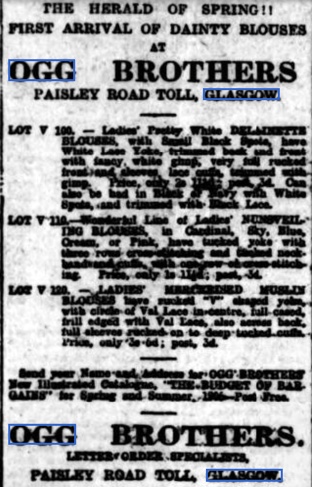 Published: Saturday 04 September 1909 in the Hamilton Herald and Lanarkshire Weekly News.
Search on!