Answer: What’s the relationship between these two fish?

Dan Russell • September 18, 2019
SearchReSearch
Republished with permission from SearchReSearch
Answer: What’s the relationship between these two fish? Dan Russell
I don't mean to have so many ichthyological Challenges,
it's just that I can't help myself...

When I go diving, the world is just SO different than the dry world on land. That vast difference always makes me wonder what's going on.

In this case, I noticed this very clear connection between these two fish and wondered to myself: What's going on here??

This is the kind of moment that makes for an interesting SRS Challenge--that moment of wondering--that sudden sense of slight bewilderment and amazement. That, my friends, is the basis of all research. Why is this like that??

1. Here's Fish #1. They hang out in rocky crevices, alway near a kind of purple glaze on part of the rocks. What kind of fish is this?? (For reference, it's about 4 inches long.) 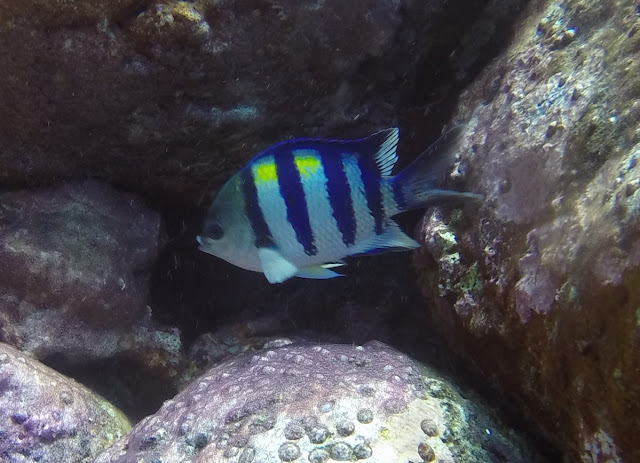 Today we're onto fish identification. We need to identify the fish above and the fish below.
Using the information we have at hand, we KNOW it's a tropical fish (I said as much in the Challenge) and that it's somehow associated with purple.... something. (I called it a "haze." That's about as useless a term as you might want. Clearly, I don't know what the purple stuff is.)
I thought I'd try doing it with just a simple query, then searching through some images to get a good match.
My query was a simple description of what I see in the photo:
[ tropical fish vertical bars yellow purple ]
This is what I got... and it worries me. Looks like there are LOTS of fish with vertical bars... 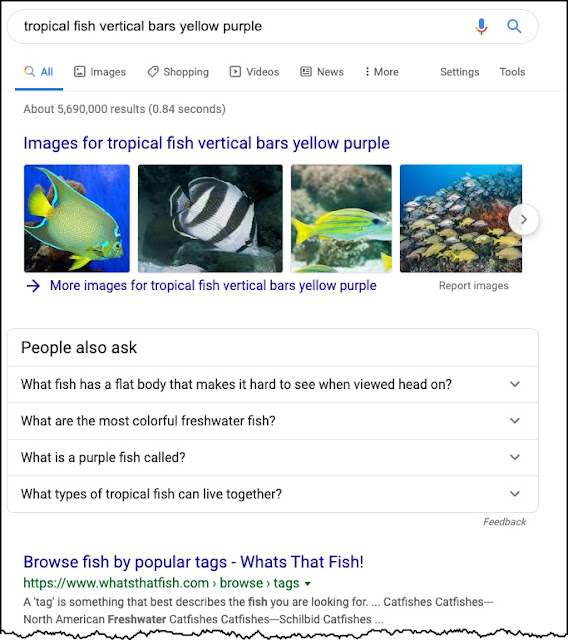 I switched immediately to Images and found that the results are much more promising. Yes, there are lots of fish with vertical bars, but the images page put my mind at ease. The first fish in the results looks very close to what I seek: 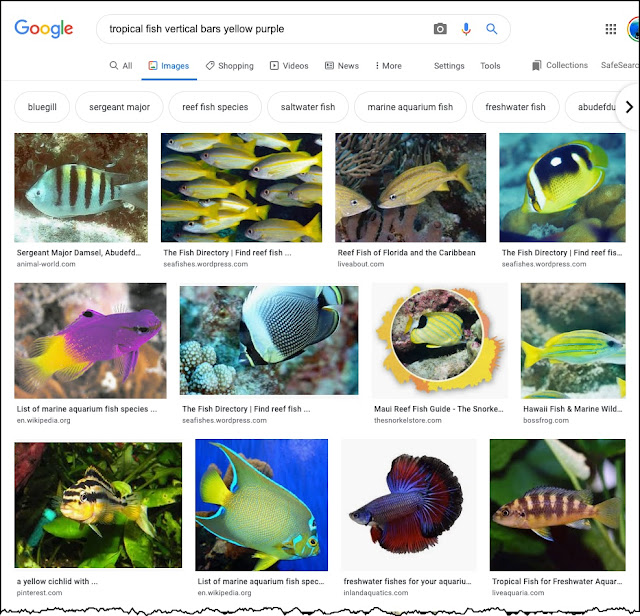 That first result (upper left corner) tells me that this is an Abudefduf saxatilis, which is a kind of Damselfish or Clownfish in the family Pomacentridae. This is important information because LOTS of related fish can look very similar. (In fact, fish appearance can vary hugely over the course of their lives. But that's another story.)
So naturally I looked up Pomacentridae to see if there was any useful information there. I found the Wikipedia article helpful, but not definitive. I learned that these fish are found on or near coral reefs in the Indo-West Pacific (from East Africa to Polynesia). The area from the Philippines to Australia hosts the greatest concentration of species, but that there are also significant populations in the Atlantic and the Mediterranean.
I thought that Images for Pomacentridae might be interesting, so I looked at that page. What do you know? Right there, second image--an exact match. But notice--that's NOT an Abudefduf saxatilis, it's an Abudefduf vaigiensis! (Also known as the "Indo-Pacific Sargent Major.") 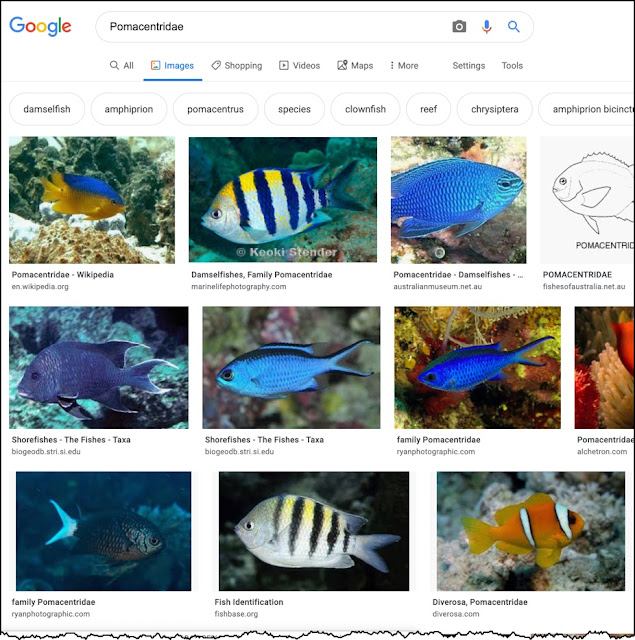 Notice that there's another fish that looks pretty similar (the striped fish in the bottom row). What's the difference? Note the difference in the color of the stripes and the yellow across the top. As you know, photos can be hard to trust, especially with underwater photos. So, what can we do to be more precise about this fish identification?
Here I put the two major striped varieties of Sargent Majors side-by-side (Abudefduf vaigiensis and A. saxatilis).

Both have 5 vertical bars, both have a yellow patch on the back--they're surprisingly similar. I did a search for:
[ Abudefduf identification ]
and found fairly detailed descriptions in FishBase.se (A. saxatilis and A. vaigiensis), but the written descriptions are nearly identical. The biggest difference is their respective ranges.
So perhaps we have to identify the other fish in the next image, figure out its range, and see where they overlap. 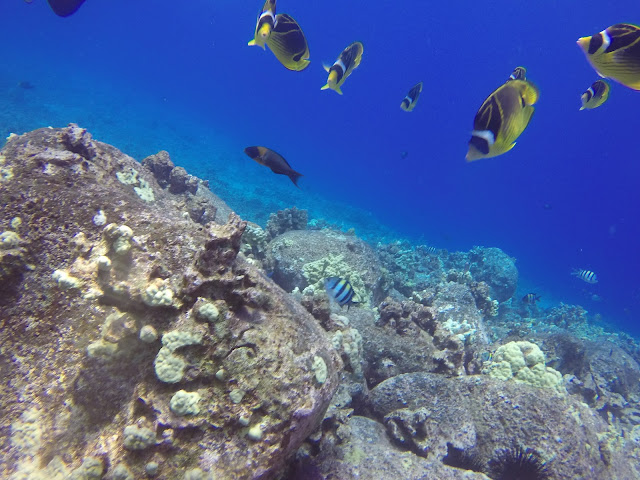 So...
2. What kind of fish is Fish 2? (It's about 7 - 8 inches in length.)
This time I went with trusty Yandex search on a cropped image. I took the above image and cropped it down to a single individual fish, like this: 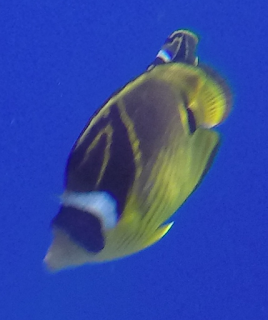 Dropped that into Yandex reverse-image search and got these great results: 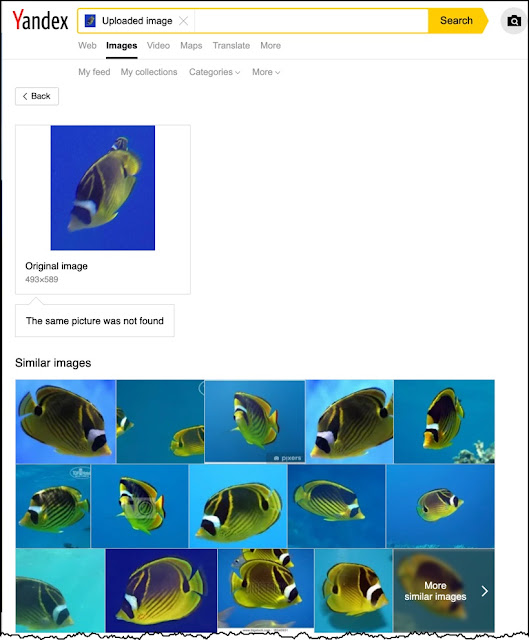 From this page, it's easy to figure out that this is a Raccoon butterflyfish (Chaetodon lunula), whose distribution is--surprise surprise!-- in the Indo-Pacific!

This strongly suggests that the Sargent Major seen above is actually an Abudefduf vaigiensis (aka Indo-Pacific Sargent Major).

Now we've cleared THAT up.

3. What's going on when Fish 2 quickly swim into the crevices with purple glaze?
As you can see in the first picture, there really IS a purple haze (or glaze) on the rock surfaces near the Indo-Pacific Sargent Major. But since I'm not sure what the glaze (or haze) is, I did a query like this:

This way I'll get everything with purple something and the Indo-Pacific sargent major. Note that I could also have done the more specific:

With either query, one quickly finds that it's the MALE Sargent Majors that are protecting purple eggs. They also fan their tails near the eggs to aerate them.

To find the connection between the Sargent Majors and the Raccoon butterflyfish, just search for them both:

(Or use their scientific names--in this case it gives more-or-less the same results.)

You'll quickly find articles where both of these fish are named--and learn that Raccoon butterflyfish (along with several other kinds of fish) are opportunistic poachers of Sargent Major eggs... those purple glaze patches you see in image 1 above. That's why the Sargent Majors defend their nests with such diligence.

Interestingly, if a diver manages to scare the Sargent Major away from its nest, other fish will swoop in to get what eggs they can. As a consequence, Raccoon butterflyfish will sometimes follow divers around, hoping to pick up some eggs when the giant human scares the little Sargent Major away for a few seconds.

4. Where is Dan now??
Based on what we see in these two fish, all we know definitively is that I'm somewhere in the Indo-Pacific. But look carefully in the background of the second image and you'll see this guy: 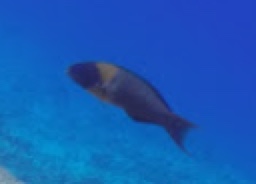 A quick search on Images will tell you that this is the Saddle Wrasse (Thalassoma duperrey). Since we've already used Fishbase.se as a reputable source of fishy data, you can quick get lots of info about this wrasse. In particular, if you look at the range maps for each of these fish, you'll see that while all three are Indo-Pacific in range, the Saddle Wrasse is only in Hawai'i.

And that, in fact, is where I was. (Diving off the Kona coast of the Big Island, to be precise.) 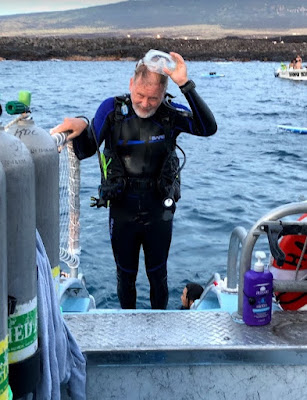 And, while there, I also did a fantastic night dive with the Manta rays. (Here's a link to the YouTube video I made from that dive.)

There are several here...

1. Animal / plant / fish identification can be very tricky--especially with fish that are variable in appearance. It such cases you have to pull together multiple sources of information (e.g. range and distribution information) in order to pin things down.

2. Sometimes you need to look in the background for additional clues. Here we had to not only identify the two fish I asked about, but also a 3rd fish in the background in order to zero in on the location. (The saddle wrasse let us pinpoint where I was diving.)

3. Simple text searches can be useful in describing your visual target. As you saw, my first approach in description worked out pretty well. ("vertical bars" etc.) From there I was able to gather enough information to pull together a decent set of results.

This took me much longer to write up than to do... but I hope you enjoyed the results... and the journey.