Travel is an endless source of SearchResearch...

While in DC I found this fountain that seemed so out-of-place and unlike other fountains that I had to wonder what the backstory was. 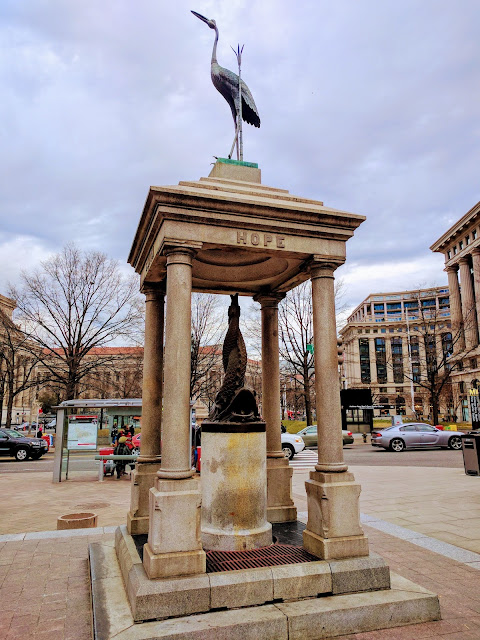 As you can see below (look at the very plain fountain two pictures down), it reminded me of another fountain in Petaluma, California. What's the thread that links these two distantly separated (and stylistically separated) water fountains? Can you figure it out?

It's not hard to figure how where this fountain is. You could look at the EXIF metadata (see my earlier post on how to examine EXIF metadata) and find that it's at 38.893889, -77.021283, which puts it solidly in the center of Washington DC. 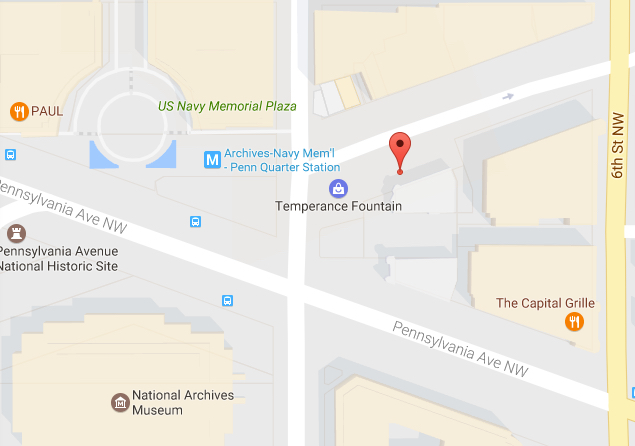 Note that the GPS red pin in the above map isn't exactly on the "Temperance Fountain." Is the lat/long slightly wrong, or what's going on? To check, I looked first looked at the satellite image: 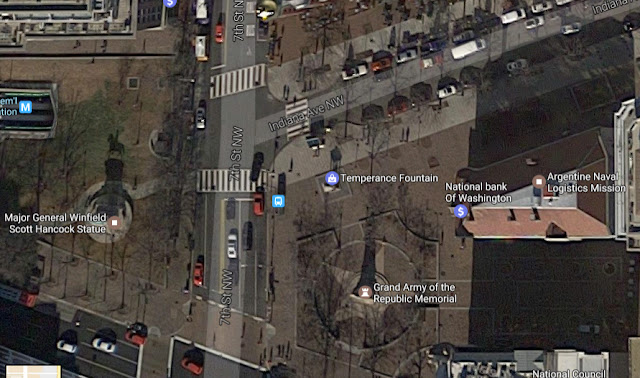 You can see the shadow of the "temperance fountain" onto the sidewalk, which suggests that it's actually a bit to the west of the drop pin. Let's check Streetview at that location:

It's clearly the same fountain, but from a different angle. If we zoom in a bit, we can read the words...

"charity" and "temperance." What an unexpected trio of words: Hope, Charity, Temperance. I wonder what's on the 4th side?

Curiously, I did a search with the words I knew, [ hope charity temperance ], but before I could finish typing the end of the word "temperance" look at what showed up in my suggestions list:

This is a suggestion for the 4-word phrase I was looking for! Could the words be temperance, charity, faith, and hope?

I tried checking on Streetview, but the camera is just a BIT too far away to be sure.

So I tried doing an Search-by-Image, and that didn't work so well. None of the hits were of this fountain. 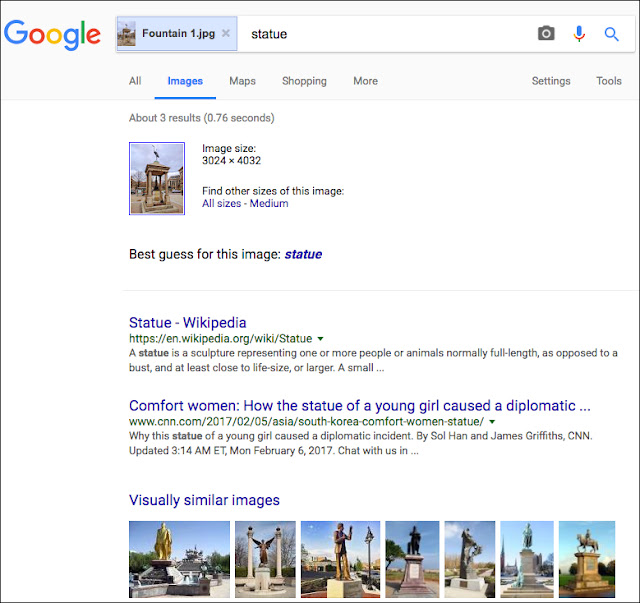 But as we've talked about before, you can MODIFY the search query WITH the searched-for image in place. What would be the best search term to add? Probably the most specific (and rarest) term, and one that we can read directly off the fountain itself: temperance

Here's my modified Search-By-Image query. Notice that I added the additional search term temperance to the query. 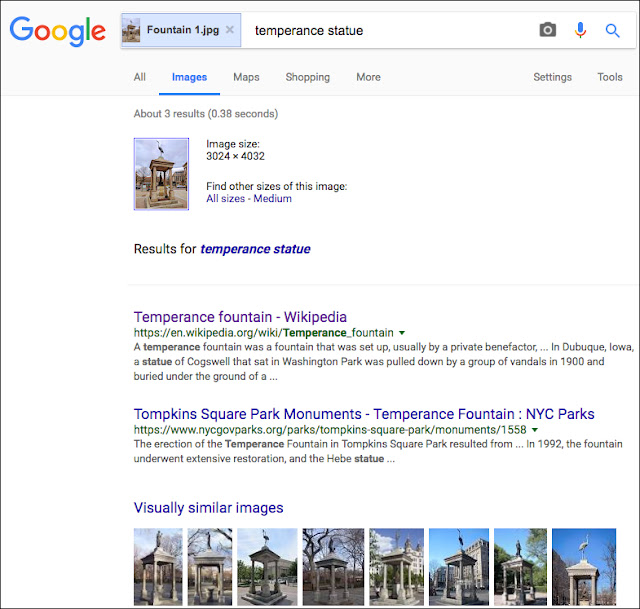 Now we've got something. As you can see, we have pretty good results, including many of the "Visually similar images" are of the crane-topped temperance fountain in DC. By clicking around a bit, we can quickly learn that this fountain was donated to the city in 1882 by the Temperance crusader Henry D. Cogswell, oddly enough, he is from San Francisco. This fountain was one of a series of fountains he had commissioned in a hopeful belief that easy access to cool drinking water would keep people from consuming alcohol. The words "Faith," "Hope," "Charity," and "Temperance" are inscribed around the fountain's canopy, which bears a life-sized heron, and has a pair of dolphins (although the dolphins have scales). Originally, visitors were supposed to drink the ice water that sprung from the dolphins' mouth with a brass cup attached to the fountain. (Oooh... how sanitary!) The city quickly got fed up with putting ice into the base of the fountain, and fairly quickly gave up on the entire idea.

On the other hand, many other WCTU temperance fountains have survived the years since the years of temperance, including ones in Philadelphia, New York, and (see below) Petaluma...

2. Why did looking at the inscription (below), make me laugh out loud? 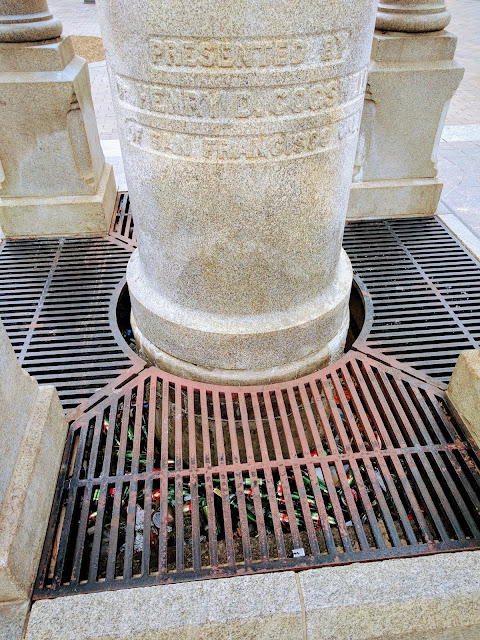 This was kind of a very simple Challenge. When I looked in the grate, I saw lots of green bottles... the kind that beer comes in... How ironic that they should besmirch a Temperance Fountain! (I can't help but think this must be someone's idea of a joke...) 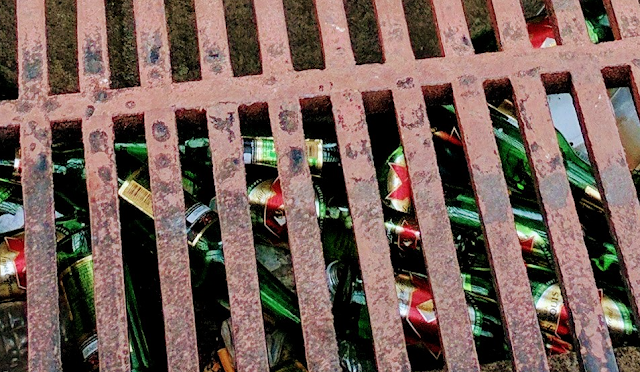 It's also worth noticing that this fountain was "donated by Henry B. Cogswell of San Francisco" and, as the Wikipedia article points out, it has survived the years mostly unscathed (although early on it lost the ability to dispense water).

By contrast, the Cogswell temperance fountain at California and Market Street in San Francisco featured a statue of Henry D. Cogswell himself. It was so unloved that it was pulled down on New Year's Eve Night of 1893-1894 by "a lynch party of self-professed art lovers" including Gelett Burgess (who was fired from his job at UC Berkeley). On the other hand, Cogswell's 1879 statue of Ben Franklin which is paired with a temperance fountain in Washington Square (on the other side of San Francisco) remains untouched and in working order to this day.

3. Here's another fountain I found in Petaluma, CA (below). It's not nearly as fancy and decorative, but it's actually very similar to the fountain above. What's the story that connects these two fountains? 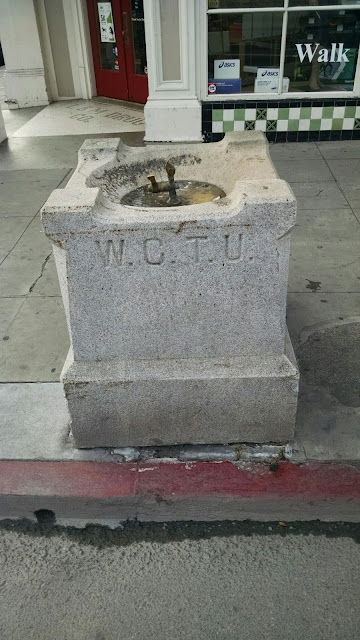 And now we know. A quick search for:

tells us that this is the "Women's Christian Temperance Union." The organization, which helped to set up a lot of Temperance fountains, still exists to this day (see the WCTU website), and are still advocating an abstemious lifestyle.

The National Woman's Christian Temperance Union (WCTU) was founded in Cleveland, Ohio in November of 1874. It grew out of the "Woman's Crusade" of the winter of 1873-1874.... after listening to a lecture by Dr. Dio Lewis, [the women] were moved to a non-violent protest against the dangers of alcohol. Normally quiet housewives dropped to their knees for pray-ins in local saloons and demanded that the sale of liquor be stopped. In three months the women had driven liquor out of 250 communities, and for the first time felt what could be accomplished by standing together..

Local chapters were called "Unions" and were largely autonomous, but closely linked to the state unions and national headquarters. There were clear channels of authority and communication and the WCTU quickly became the largest woman's organization in the United States (and later, in the world.)

This led directly to the adoption of the 18th Amendment to the Constitution on January 16, 1918, which led to Prohibition, and all of the social issues that followed on after that.
The connection, then is that both are Temperance Fountains. Both are an attempt at social engineering (to provide cool, refreshing water to drink, rather than have to duck into the nearest saloon for harder stuff).
Just so you'll know, I took a picture of the OTHER side of the Petaluma Temperance Fountain as well... 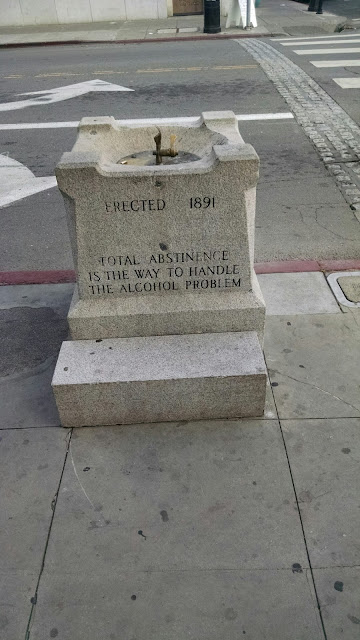 Which you could find with a Google Images query like:
[ Petaluma temperance fountain ]
4. And finally, what does this soda fountain have to do with the above water fountains? (Not this one specifically, but this category of thing.) 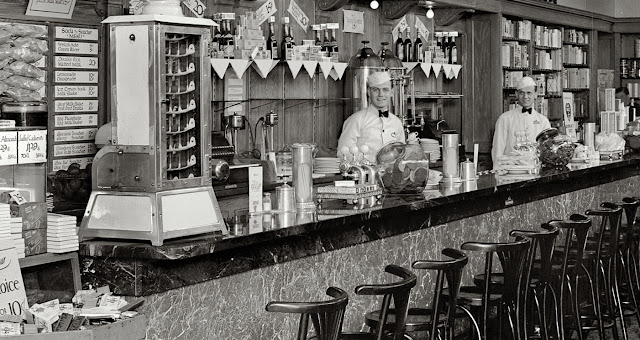 Now we know that there's a connection, a simple search for:

leads us to the Wikipedia article on soda fountains where it tells us that:

A 1915 issue of Soda Fountain magazine stated: "The soda fountain of today is an ally of temperance... Ice cream soda is a greater medium for the cause of temperance than all the sermon ever preached on that subject."

That's certainly interesting--can we track that 1915 reference down?

The short answer is, apparently, no. I tried Google Books, the Hathi Trust and various archives, but I can't even find a place where copies of this magazine are kept! (Although the query [ "the Soda Fountain" temperance ] did lead me to the 1921 and 1922 editions of the magazine, which are pretty entertaining reading. I just haven't been able to get to the 1915 edition.) So we'll have to take the Wikipedia quote with a grain of salt (it could well be correct, but I haven't yet been able to verify it).

On the other hand, I did find several references to a text published by the Soda Fountain magazine from 1915 called (are you ready for this title?):

"The Dispenser's Formulary: Or, Soda Water Guide; A PRACTICAL HANDBOOK FOR SODA FOUNTAIN OPERATORS CONSISTING OF OVER 2,000 TESTED FORMULAS FOR SODA FOUNTAIN PRODUCTS WITH COMPLETE INFORMATION ON FOUNTAIN SERVICE, FOUNTAIN STANDARDS, ICE CREAM STANDARDS, AND FORMULAS, AND LUNCHEONETTE SERVICE INCLUDING AN APPENDIX OF MANUFACTURERS’ FORMULAS TOGETHER WITH DESCRIPTIVE INFORMATION OF THEIR FOUNTAIN APPARATUS, SUNDRIES AND SUPPLIES."

Caps are theirs, not mine.

This was easy to find in Google Books with the query [ soda fountain ] with a time-limit to publications from 1915. On page 6, in the introduction to this special edition, the editors write:

"The widening spread of the temperance movement and the year round stability to trade that is a part of the luncheonette department are both factors that will count for the soda fountain's great growth and prosperity during the years before us."

This same search leads to several books with background stories that link the rise of soda fountains (or malt shops, or ice cream parlors) to the temperance movement. As Anne Funderberg writes in Chocolate, Strawberry, and Vanilla: A History of American Ice Cream,

By 1906, confectionaries or drugstores operating soda fountains could be found on one or more corners at every principal intersection in Chicago. In New York City, temperance leaders beamed as the number of soda fountains surpassed the number of bars in the Modern Gomorrah.

Although soda fountains didn't lead directly to the temperance movement, they definitely rode the wave towards a kind of popularization and success.


The lessons should be clear here. But let's lay them out:

1. There are often multiple ways to find the same thing. In this case, I used the EXIF metadata, but Search-By-Image also works... IF you modify the query to take into account additional information.

2. You can modify a Search-By-Image query to zero in on what you seek. In the example above, the regular SBI didn't work well, but once I changed the query to include some additional information, it worked really quite well.

3. Sometimes you have to zoom in a bit. The beer bottles at the base of the DC temperance fountain are funny... but only if you notice them. When researching a picture, it's often really useful to zoom in a bit and check out the details.

4. Remember Google Books is great for archival information (such as the connection between soda fountains and temperance). An easy search can get you a lot of really useful historical context.