Answer: What’s that thing on the ground?

Dan Russell • September 13, 2017
SearchReSearch
Republished with permission from SearchReSearch
Answer: What’s that thing on the ground? Dan Russell
We see strange / odd / interesting things every day...
... but often we don't think to ask "Hey.. what is that thing?" And it's corresponding Challenge: "How can I find out about this??"


One of my secret missions with SRS is to help all of us develop a working sense of curiosity... and more than that, to figure out ways to satisfy that curious twinge.

This is one such story. 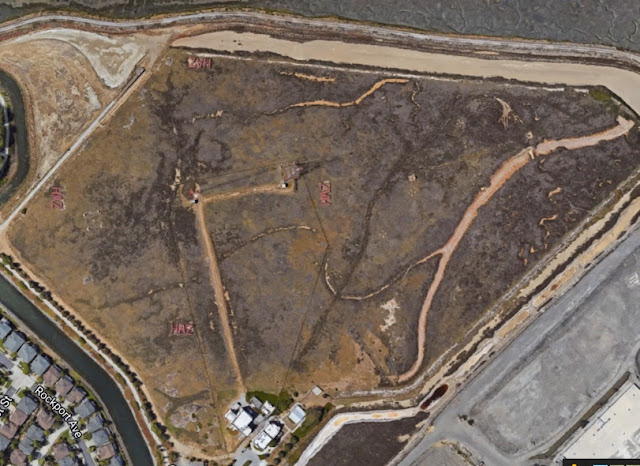 It's a little hard to see in this image, but it's an strange beast of an antenna, with a large plate-like thing at the top of the mast. Here's the side view: 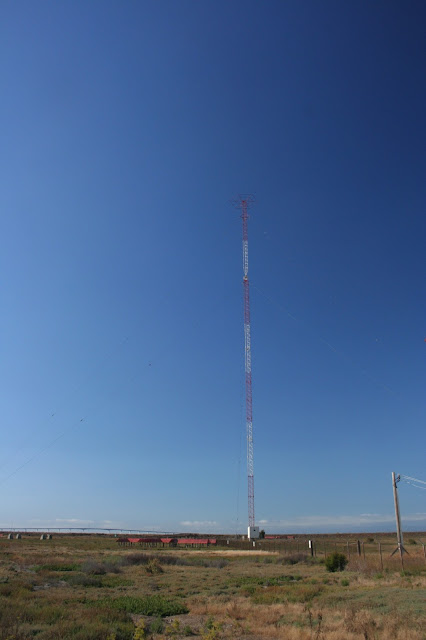 Can you see the hexagonal thing at the very top? (Click on the image to zoom in. Or if you want to, download the image and you can zoom as much as you'd like.)
At the fence I also found this, in case it helps: 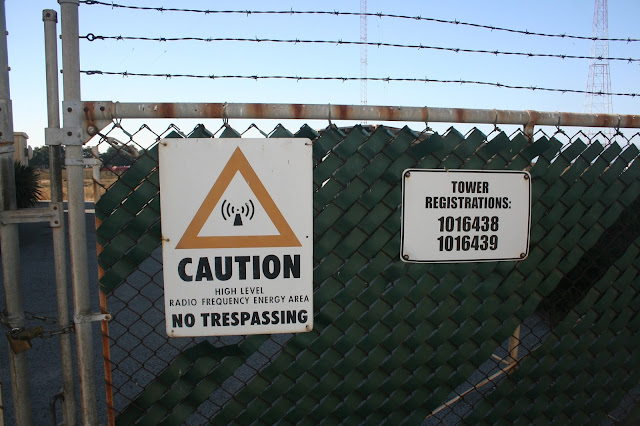 This is one of those everyday mysteries--things you see all the time without understanding what it is. But that's NOT what SRS is about! When we see mysteries, we try to understand what's happening. So.. .
Can you figure out the story here? In particular:

1. What IS the story behind this antenna? (A bit of history, please.)

Searching for the antenna numbers:
[ tower registration 1016438 ]
[ tower registration 1016439 ]
With both of these queries, we quickly learn from the FCC's site "Antenna Structure Registration" (ASR) program exists to keep track of any antenna structure that might be a potential flight hazard. In general, this includes structures that are taller than 200 feet above ground level or that may interfere with the flight path of a nearby airport. SFO's runway is only 7.9 miles (12.7 km) away, and practically on the final approach path.
The ASR program lets the FCC require painting and lighting of antenna structures that may pose a hazard to air navigation. If the owner changes the antenna, they have to post an update (and get the FCC to agree to the change).
The second result is the ASR database, which lets us look up these antenna registration numbers. That looks like this: 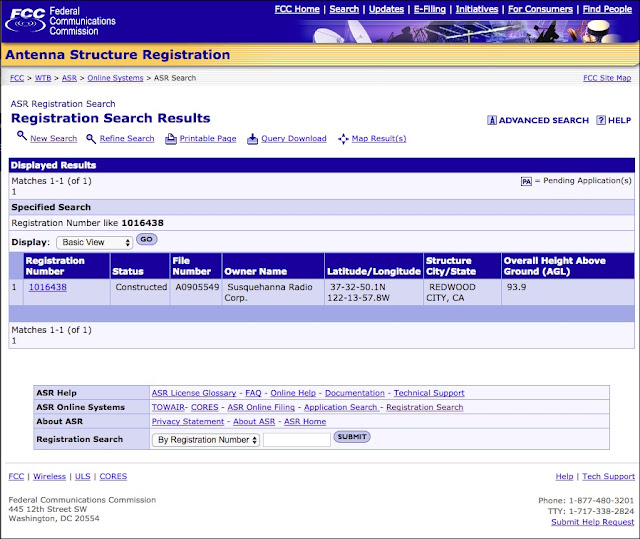 This database shows the owner as Susquehanna Radio Corp.
By clicking on the Registration Number link, I land on this page, which has lots of information about the tower, including who owns it... 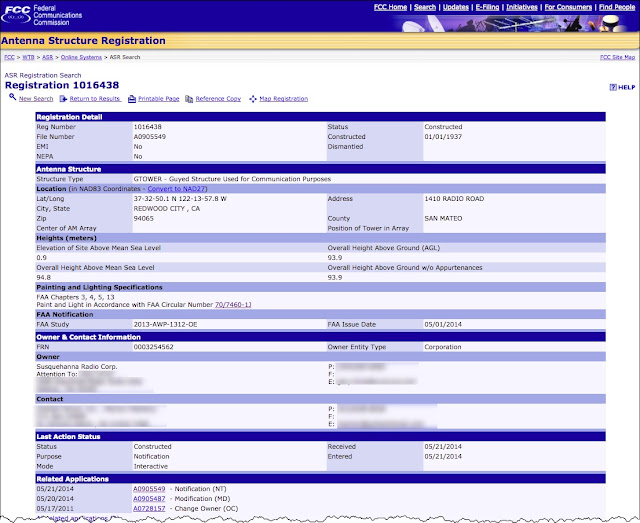 As Regular Reader Jon pointed out, searching for:
[ Susquehanna radio corp antenna San Francisco airport ]
found a really nice posting about this antenna. This site also tells us that this is an AM transmitter, and explains that the hexagonal frame at the top of the antenna is a 'top-hat' is an electrical height extender, which increases the boost for distance signal that couldn't be done because it's too close to the airport. More generally, this kind of antenna is called a "mast radiator" antenna. (With a really nice Wikipedia page on this topic.)

2. Why does it have that funny plate plate at the top?

We know part of the answer to this from our previous searches. But doing a bit of background checking, the search:
[hexagon AM radio transmitting antenna]
leads us to several pages with images. (Where we quickly learn that the top-hat need not be a hexagon! Squares seem to do just fine as well.) The top-hat atop the mast can be see in the Wikipedia Category:Antenna masts with capacitive top hats These "top hats" are sometimes used on the antennas used for AM broadcasting on the MF (medium frequency) and LF (long frequency) bands, to increase the current in the top of the antenna, thereby increasing radiated power, allowing a shorter antenna to be used.
And by the way, if you zoom in enough on Google Maps, you can clearly read the red "HAZ" letters on the ground (required by the FCC, as specified in their ASR bulletins). 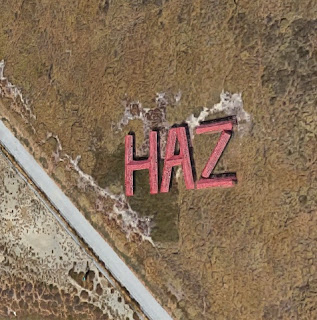 3. Who uses this antenna now, and for what purpose?

This antenna obviously linked to the radio station KNBR/KNBC (Depending on era), transmitting on 680 AM. With the FCC ASR site showing the owner as Susquehanna Radio Corp.
Who are they? When you search for:
[ Susquehanna Radio Corporation ]
you learn that this entity is now defunct, taken over a company called Cumulus. (Interestingly, the ASR form says it's owned by Susquehanna--but the CONTACT information tells us that it's really owned by Cumulus. Good to know their data is up-to-date, although the title isn't quite right.)
The full history can be read at the WayMarking site about KNBR. They write:

"KNBR is an AM radio station licensed to San Francisco, broadcasting on a clear channel at 680 kHz from transmitting facilities near Belmont, California. KNBR's non-directional 50,000-watt class-A signal can be heard throughout much of the western United States and as far west as the Hawaiian Islands at night. For several decades, KNBR enjoyed a long history as the flagship station of NBC's West Coast radio operations."

In 2015, KNBR's studios were relocated from 55 Hawthorne Street to 750 Battery Street after parent Cumulus Media consolidated its San Francisco radio stations in one building."

Which is where things stand today. The office is in San Francisco, but the old antennas (top hat and all) still stand and serve, red lights blinking, just about 8 miles from the airport.
Search Lessons
The biggest lesson is this:
1. Be curious about the world--spend a couple of minutes each day scratching that curiosity itch. This blog is all about those tools and methods to search things out. You've got the tools to do it!
2. Searching for the Tower Registration Numbers was a great place to start. It's an obvious place to start, and I'm sure we would have found them by searching for the antennas from th place name, but given the numbers on the signs, that was wonderful. It led us straight to the FCC ASR database, and the rest just fell out easily.
Search on!