Answer: What’s going on in these photos?

Dan Russell • February 8, 2018
SearchReSearch
Republished with permission from SearchReSearch
Answer: What’s going on in these photos? Dan Russell
The key is asking good questions.
But you knew that.
This week, we tried to figure out what's going on with a couple of decontextualized images. In this case, these were pictures that I'd taken and recently re-found. I also found myself puzzling about what they were... (Why, I asked myself, did I take this picture??)
1. What's up with these railroad tracks? They see very odd, yet familiar. Why are there three rails? (I'll spare you the metadata extraction task. This image was taken at: 38.908711, -77.068983)
As many Regular Readers quickly figured out, that lat/long is at the corner of P Street NW and 35th Street NW in Georgetown, Washington, DC.
If you jump there using Streetview, you'll see more-or-less the same image I show above, confirming that the image is recent and in the correct location. The map also tells us that this is in the Washington DC neighborhood. 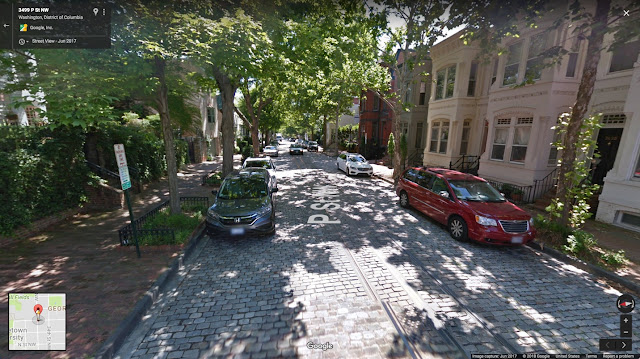 Since I know that trains that run through small side-streets are typically called streetcars, I started with the search:
[ streetcar Georgetown ]
and quickly found the Wikipedia article about Streetcars in Washington, D.C. I did a quick Control-F text-search in that article and found that there are several mentions of P Street in the article. Apparently, there have been streetcars running to Georgetown down P Street since 1876. A few years later, in1895, Congress authorized the Rock Creek Company to purchase the Washington and Georgetown Railroad Company, producing the Capital Traction Company. In the article there's a comment that "Tracks are still visible on 3200 to 3400 blocks of O St NW and P St NW..." Checking the Google Map, that's correct. (Just to be obsessive, I also checked Streetview on O St. and found that it's true: O Street also has old streetcar tracks with cobblestones.)
Interestingly, a bit later in the the Wikipedia it goes on to say that "...The region's only remaining visible tracks and conduit are in the center of the cobblestone 3200 through 3400 blocks of P Street NW and O Street NW..."
That's fine, and it's consistent with what we already learned... but I don't know what a conduit is in this sense. By clicking on the link that's offered, I land on the DC Streetcar Tracks and Structures web page. There, I learned that the "conduit" is the slot in the center which acts like a third rail, supplying power to the streetcar. Reading the Streetcars in Washington, D.C. Wiki article carefully, I see that the 3200 - 3400 blocks of P Street have the only remaining tracks and conduit that are visible in Georgetown and DC.
Still a little uncertain about what a conduit was, I did another Image search for:
[ streetcar conduit diagram ]
and found this page from the US patent application: And another diagram, showing how the conduit connects for power to the streetcar: 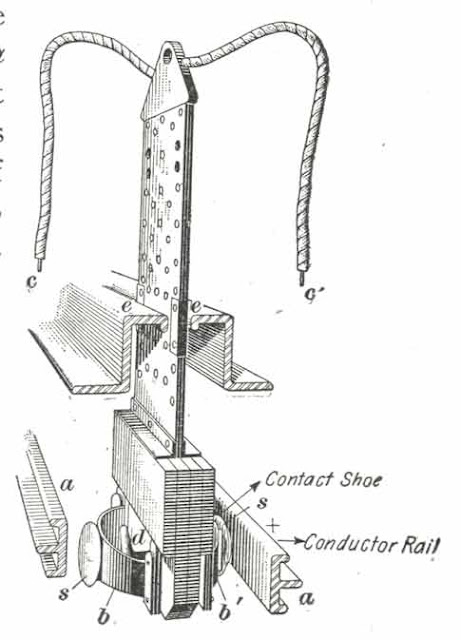 And why would this look familiar to me? What else does it look like?
This is a tricky question. How do I figure out something that's familiar to me??
The only way I know to do this is to do a bit of visual scanning. I wasn't sure where to start, so I did a few searches for images using queries like [ streetcar conduit ] or [ streetcar conduit rails ], looking for something that would trigger an ah ha moment. Unfortunately, these weren't working for me.
My next query hit paydirt. I thought I'd try looking for images of the original Georgetown railway, so I did an Image search for:
[ Capital Traction Company ]
and found this for my results page: 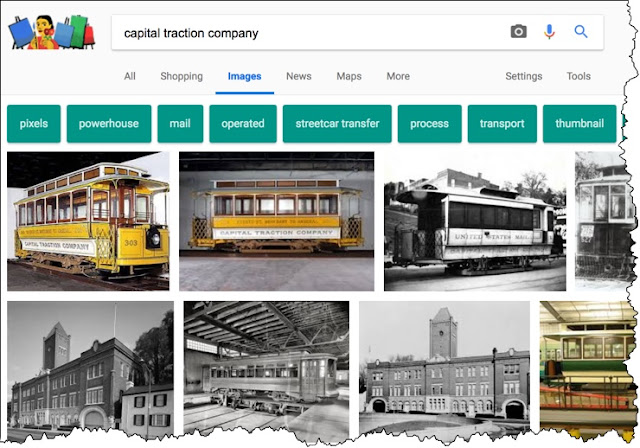 That's when it hit me. Those streetcars look a great deal like the cable cars I've seen in San Francisco. What's more, cable cars also have a groove in the center of the street that looks like a conduit! 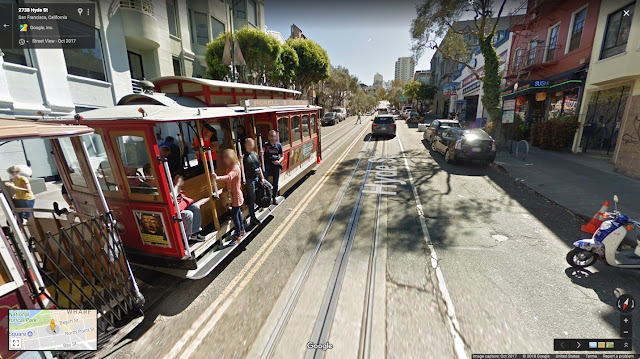 Although, unlike the Georgetown streetcars conduit there's a cable down there, rather than an energized electrical cable. The cable car gripman pulls back on a long lever, closing the jaws of the grip around the cable, which is constantly moving just under the street. (Yes, it sounds unlikely--the cable is really, really long, and run in a continuous loop under the street.)
But the cable car slot is NOT a conduit. It just looks a lot like one, which is why it seemed so familiar!
2. Here's another picture I got from a friend, obviously taken late at night at the Googleplex back in December, 2013. What's the backstory on the dinosaur? Why pink flamingos? And what's with all the yarn?? (Extra credit: What's the dinosaur's name?)
I was there, but obviously don't remember much about this incident with the dinosaur in the night. Can you fill me in on the yarn, flamingos, and dinosaur?
This was a fun Challenge. It's not hard... a simple search with the uncommon terms from the Challenge statement works well:
[ Googleplex dinosaur ]
leads to all kinds of fun pictures. Here's one from the first day flamingos appeared with the T-rex. I remember walking into the building that day and being impressed that someone went to all the trouble to buy dozens of flamingos for a practical joke. (This was not long after the T-rex was first installed.) 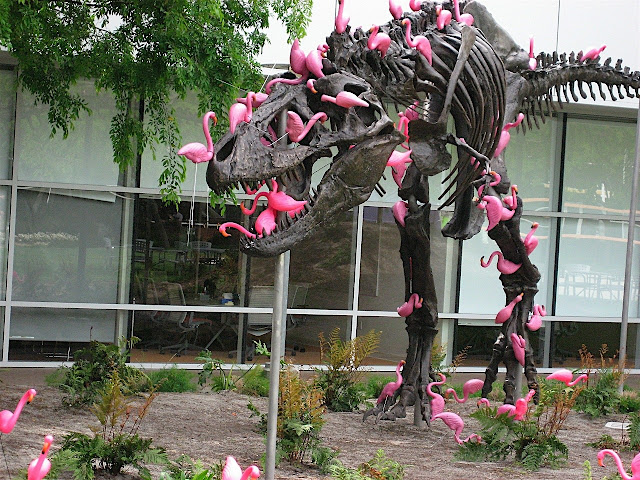 It's also fairly easy to find multiple sources (e.g. Business Insider) telling us that the T-rex's name is Stan. (And no, I don't know why "Stan.")
The yarn thing is a bit harder--the key insight here is to search for the idea:
[ yarn statutes ] or
[ yarn covering statues ]
to discover that knitting yarn-based coverings for statues is called yarn-bombing, which is often a gentle act that is often about reclaiming and personalizing sterile or cold public places. It's also often quite funny, as the artists sometimes do quite elaborate yarn constructions to annotate or comment on public art. (See: R2D2, benches, or the Wall Street bull covered in yarn).
So in some sense, the flamingos are, like yarnbombs, easily removable commentary on the underlying structure.
You might enjoy knowing that perhaps the cleverest "easily removable commentary" on Stan-the-T-rex happened a few weeks after the flamingos first appeared. They slowly disappeared over time. Two went missing the first night, four vanished the next night, etc. Until after about two weeks, they were all gone. All that was left was this, below the tail end of Stan... 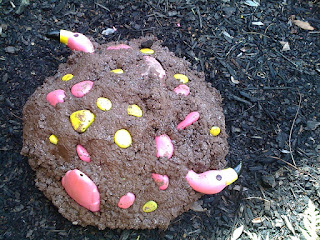 1. Searching for familiar things that you don't have words for often requires a bit of browsing. In this case, hunting for "something that looks like a triple streetcar track" took a bit of doing. We started by trying to figure out what those tracks were in Georgetown, then we had to pull out a little bit and start looking at images of the Capital Traction Company before we found an image that reminded me of the target--San Francisco cable cars! The skill here is to get to a topic area that's close to what you seek... then browse a bit.
2. Searching for a concept is often choosing a query that describes the concept, rather than just searching for the thing itself. Here, it wasn't obvious how to search for information behind the yarn on the statue... until we searched for the concept expressed in the simplest possible form. THEN we learned that there was a general concept of yarnbombing, which then gave us what we needed to know.
Search on!