Answer: What was that word again? Effective searching with old terms.

Dan Russell • June 21, 2016
SearchReSearch
Republished with permission from SearchReSearch
Answer: What was that word again? Effective searching with old terms. Dan Russell
As you know...
... the language of the past is somewhat different than the one we speak (and write) now.
As a consequence, when you're trying to search for historical content, you sometimes (often?) have to shift your language to accommodate the way authors in the past would have written.
The motivating example was the long-known, well-loved brontosaurus. When I was a kid, that was the dinosaur of choice (unless you were a T-Rex fan). But, a finer distinction was made between the brontosaurus and the apatosaurus.


And, more generally, can you come up with a general way to help answer questions like this?

The interest level in these questions were pretty high--we had lots of comments.

1. While reading about the US Civil War, I had read in one source that many of the soldiers died from some kind of disease that had extensive diarrhea. Yet, when I search in writings from that time, I find lots of diarrhea, but I seem to be missing many of the references. What other term(s) SHOULD I be using to search in archival accounts from that period for this disease?

There are several ways to find terms for medical conditions used during the US Civil War (1861 - 1865). Here are a couple of methods.

[ diarrhea during the us civil war ]

This leads us a few documents that give us several synonyms: dysentery, diarrhea, quickstep, flux, and "alvine flux" by the doctors. Unfortunately, doctors knew neither how soldiers contracted the condition nor how the diseases should be treated. Likewise, a search for:

will give us a bunch more synonyms (Delhi belly, flux, Montezuma's revenge, runs, trots, turista), but for each of these you have to check to be sure they're Civil War period relevant. Looking at the Ngram chart for "Delhi Belly" shows that it didn't come into use until the late 1940s.

Unfortunately, checking NGrams for "flux" doesn't work because it's a very common industrial term as well. However, a search for:

leads us straight to a dictionary of Civil War slang (a different source than the one above), and confirmation that "flux" and "quick step" were synonyms.

For these kinds of historical topics, it's worth checking Google Books with a search like:

which leads us quickly to The Language of the Civil War (John Wright, 2001), confirming "flux" and "bloody flux."

The disease problem was massive. Soldiers had to content not just with the fighting, but also with typhoid, pneumonia, measles, tuberculosis, and malaria. An indication of just how bad this was is shown in this chart from the Civil War Trust: 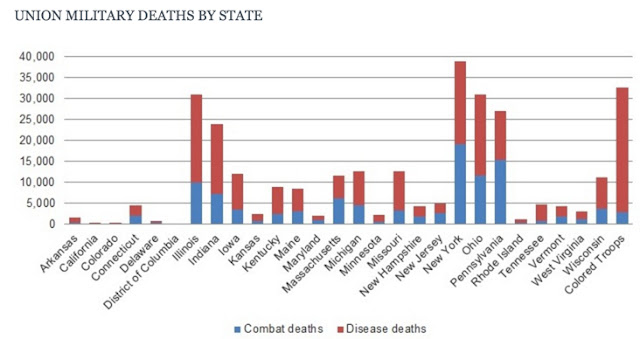 As you can see, MOST of the deaths during the American Civil War were due to disease--there were many terms, but any diarrheal problem was often called flux, quickstep, or trots. Those (along with regular old diarrhea, in all of its misspellings) are the search terms to use.

2. These days, it's popular to go to a spa that features natural hot springs, such as those at Wiesbaden (Germany) or Bath (UK). But if I'm searching for such a spa to visit in 1890's America, what search terms should I use?

Again, the problem here is to find terms that were used during this time to describe a spa with hot springs.

As we did above, you can get started by doing standard synonym queries and poking around at Wikipedia articles, looking for alternative phrases.

But I decided to go to one of the contemporary sources: archival newspapers. I found the Library of Congress collection by doing a search for:

Then, once there, I limited the dates of my search to 1890 - 1899, and searched for "Saratoga Springs" (a place that I already knew as a famous natural spring resort). My idea was to search for newspaper accounts of the place, and see how the articles referred to it.

My query gave me a page that looked like this: 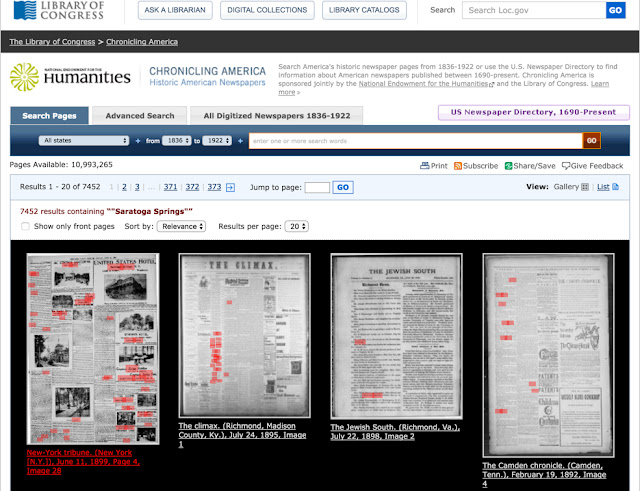 All of the red boxes are hits for the string "Saratoga Springs."

Within a couple of minutes, I found those springs referred to as:

I'm sure if I kept reading, I'd find other ways to refer to these kinds of therapeutic resorts-with-springs. But this is a great list, and it comes directly from the writing of the times.

(Interestingly, the best way to pick up on these alternative descriptions was to read through the advertisements. Often the language is colorful and the claims extravagant, but completely fun to read!)

3. While reading about optics and the life of John Dollond (the inventor of the achromatic lens, for which you should be grateful), I learned that he died of a stroke. But I can't find period accounts with that search term. What search term should I use instead to find an 18th century death by stroke?

Now we know that searching directly for synonyms can often give us lots of options, but then we need to verify that the term was used during that time period.

which led me to the only term I hadn't heard of before: apoplexy. (Well, to be honest, I'd heard of this word before, but I wasn't really sure what it meant!)

confirmed that it means a "stroke."

How do we confirm that this was using in the 1700's? The NGRAMs database only goes back to 1800, and many of the newspaper archives are limited to post 1800 as well.

But Books.Google.com goes WAAY back! By searching in Google Books for apoplexy and limiting the time range to 1700 - 1799, we see: 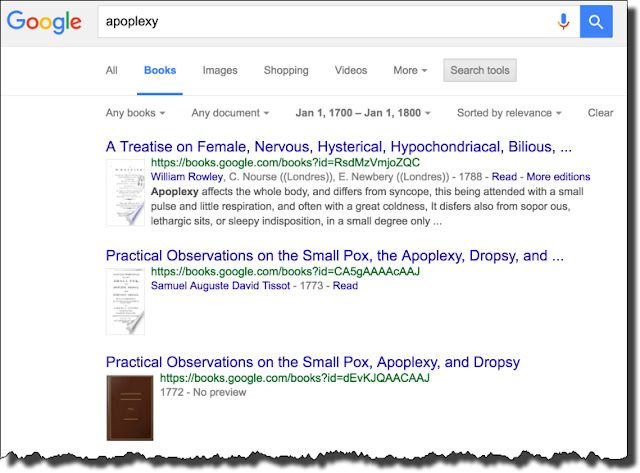 I scanned down a bit to find a book that has a readable (to my modern eyes) explanation of apoplexy, and found it in the book: Advice to people in general, with respect to their health. Translated from the French ... To which are added, by the author, two new chapters; one upon inoculation, the other upon lingering distempers ... The sixth edition, corrected and improved (by Samuel Auguste David Tissot, 1793).

Wherein we find the following definition:


I like the image here (of "inflammable blood, and that in a large quantity.."). But you get the idea. Apoplexy is the word we seek.

3. A great way to find old terminology is to check-out old newspapers and books. The simplest way to do this is via online archival newspapers (e.g., those at the Library of Congress) or in a books database (Books.Google.com) that has a collection from the deep past.