Answer: What kind of horn is that? Is that for real?

Dan Russell • December 6, 2017
SearchReSearch
Republished with permission from SearchReSearch
Answer: What kind of horn is that? Is that for real? Dan Russell
Surprise!
That crazy instrument is a real thing, albeit a bit odd.
From last week, our Challenge was to figure out if this illustration (from a concert program) was a real instrument, or just someone's fancy. 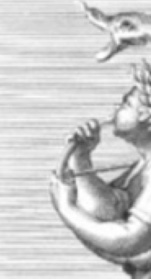 The Challenge was:
1. Is this a real instrument? Or is it just a made-up thing? If it's real, what would you call it?
2. Can you find the original source of this illustration? When and where was it first published?

As several SRS regulars pointed out, right-clicking on the image (or doing a Search-By-Image), quickly finds many instances of the "full image," or at least the rest of the instrument and the person playing it. This is what I see in my SERP: 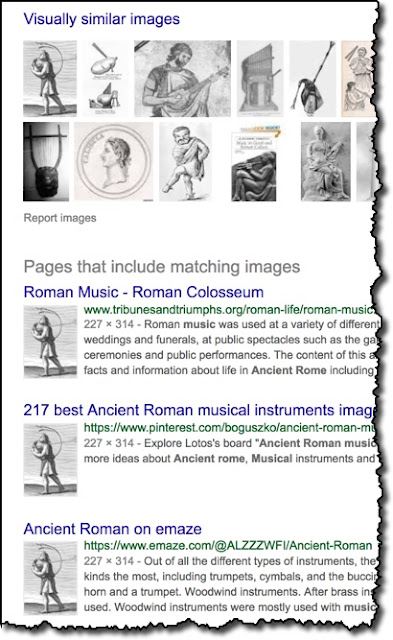 Now you can see that the more complete image shows the entire circular horn, with the rest of the body standing in the landscape.

If you click on any of these links, you quickly learn that this instrument is the cornu, a trumpet-like bronze instrument shaped in an arc covering somewhat more than half a circle (shaped a bit like an upper-case letter 'G'). It was pretty good size, about 3 m (9.8 ft) long.

But if you look carefully, it's a cornu with the head of an animal. Now that I know it's a cornu, I did an Image search with this query:

and found several more examples of cornus, along with a more complete image: 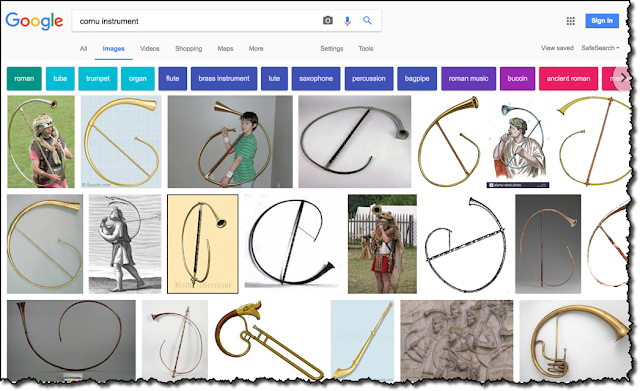 If you look in the second row, second image in, that looks a LOT like the original image. Clicking on that shows a full-view of that image, but even better, it also shows closely related images. Check out the image pointed to by the arrow: 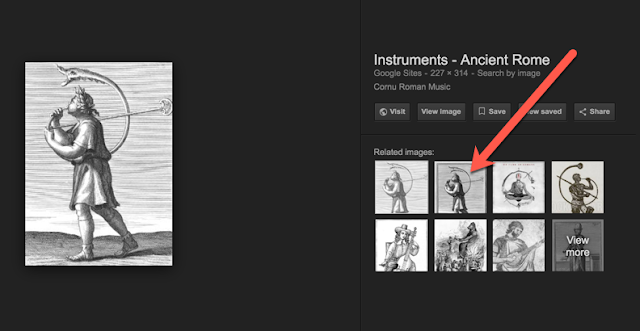 That's a "better" image for our purposes because it shows the border and some text. Here's that image up-close: 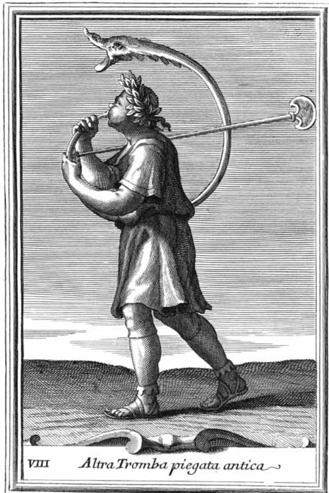 Now we can see that the bell of the cornu is a snakey-dragon-looking thing. But now we've got some very specialized text to help us search:

leads us to a number of hits, all of which lead us to the book Gabinetto Armonico (Cabinet of Harmony) in 1723, a splendid collection of 150 engravings of musical instruments from around the world. Of course, these are 18th century renderings of ancient instruments, so you shouldn't consider them as accurate depictions of what these things actually looked like, but from the perspective of the 1720s, this is what they thought.

While I enjoyed the Books.Google.com version of the Gabinetto, I wondered if I couldn't find a better scan of the text. Sure enough, but doing a search for:

I found a link to the PDF scan of the entire book, Gabinetto Armonico (high quality scan from Archive.org) 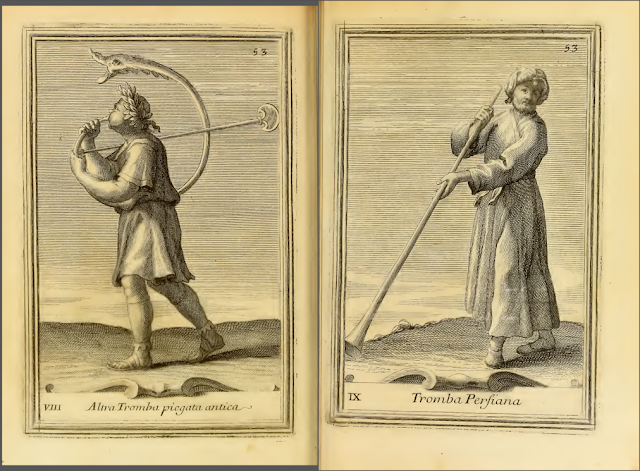 This is the original source of the illustration.

Along the way, I also read that this is referred to as a "zoomorphic" bell.

I was curious about this, because the "zoomorphic" seems to have been an 18th century interpretation of the Roman cornu. I did a bunch of searches for original (i.e., actual cornus in museums or depicted in contemporary artwork), but all I could find were "plain bells," like these cornus from Pompeii: 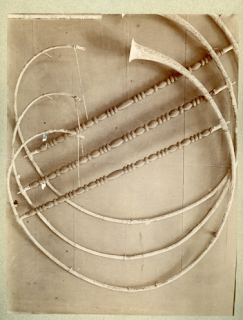 Or this one from a Roman mosaic: 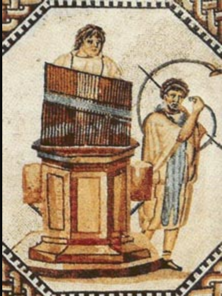 There were zoomorphic instruments, such as the carnyx, but this is a Celtic instrument from about 500 BCE. 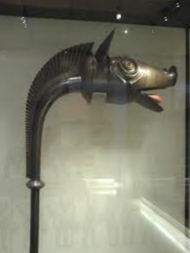 And it's straight, not curved into a giant G shape. But it's a possible inspiration for the combined dragon/snake head on the 18th century depiction of the cornu!

As we've seen before, sometimes clues come from any number of sources.

1. Keep following the image search trail until you find a high-quality image. In this case, we kept looking until we found a "good enough" image that would take us to the source.

2. Searching by image for even partial images sometimes works pretty well! I have to admit to being very impressed by the ability of Search-by-Image at pulling up high quality images of the whole. (I thought it would be harder than this.)

Moral of the story: Even if you think it might-not-work, try anyway. You might be happily surprised!