Answer: What IS that below?

Dan Russell • October 3, 2016
SearchReSearch
Republished with permission from SearchReSearch
Answer: What IS that below? Dan Russell
Ah ha! I'm back!
Over the past couple of weeks I HAVE done a bit of flying, and you'll see a few future Challenges come out of that vacation experience. Along the way I found plumes of smoke (that I was able to identify thanks to our earlier discussion). But I was pretty consciously avoiding wifi and most internet things. Now, imagine if you will, the stack of emails I need to sort through..
So let's get back into our regularly scheduled program and see we answered these Challenges!
1. The Farallon Islands lie just west of San Francisco. They're a few miles out from shore. Can I see them from San Francisco? (When would be the best time of year to look? And where should I stand?)

Ramón and Jon (the Unknown) both asked the same question:
[ Can I see farallon islands from San Francisco?]
And it turns out you can.
This image appears in two different online sources. SFCitizen.com published this image in 2008, but the same query ALSO leads to an article in the local-web-magazine SF.Curbed.com about how people used to live in the Farallons published in 2016. In both articles, the opening sentence answers our question: "On a rare clear day you can look out from the Cliff House or Ocean Beach and just barely make out the shapes of the Farallon Islands in the distance 30 miles away."
I took a slightly different approach. I figured that if someone had a picture of the Farallons taken from someplace near SF, they would have used a telephoto lens (or a telescope). So my first query was to Google Images:
[ Farallon Islands telephoto ]
Which led to several nice photos, including this one from NoeHill.com about various historic sites in the greater SF area, including the Farallons:
Ramón also discovered that there's a real-time YouTube feed from the Farallons (that I didn't know about). It's fascinating to watch. (Note that it's live, which means it's dark for much of the day. Come back when it's daylight in California.
Search lesson: The obvious queries sometimes work just fine. But as a backup, remember the strategy of searching for the method that would be used to create the data--in this case, given that the islands are so far from the mainland, only a telephoto lens would work... and that's probably going to be mentioned--hence, it can be used as a search term.
2. I've heard stories about a series of large, strange arrows that are on the ground. Apparently, they're made of concrete, or cement, or stone. In fact, I've seen one (and had no idea what I was looking at) while flying in the southwest of the US. Do these things really exist? Can you find a picture of one? Who would make these things, and why? What's the story here?
I liked Ramón's solution here. It's straight-forward and uses the clues I gave:
[concrete arrows southwest United States]Which leads to the Snopes article on the arrows: Mysterious Arrows, which points to the Wikipedia article about the Transcontinental Airway System. A little looking gives us plenty of images and links to other sites.
Some of the arrows have been preserved through local volunteer efforts. A really nice example of this is the Aviation Heritage Museum in Cibola County, western New Mexico.
Most arrows aren't so lucky. Here's one near St. George, UT, that's sort of abandoned. 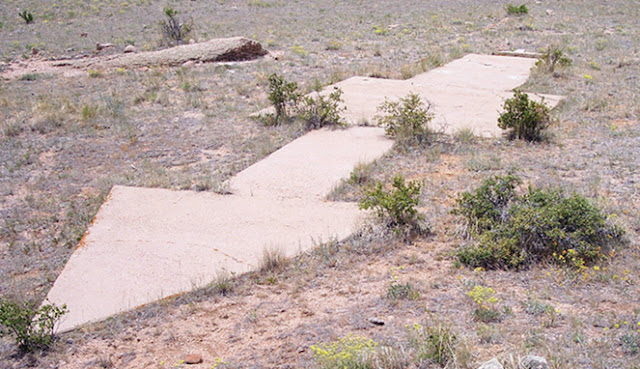 Oddly, this isn't ALL of the arrows--there are more even farther south (e.g., in Utah). Remmij found a site that lists the lat/longs of the remaining (found) arrows in Washington County, Utah. Strangely enough, I might be near one later today, if I can, I'll take a few photos...
3. Speaking of islands, while I was in Hawai'i a few weeks ago, I also heard about a Hawaiian canoe that is traveling around the world to demonstrate Hawaiian traditions of canoe building and navigation. What's the name of this canoe, and where is it now? (And is true that they don't have any GPS onboard?)
My first query was the simplest: [Hawaii canoe travel around the world] That led me to the Hokulea Worldwide website, which documents the Hokulea's travels... thus far having traveled over 60,000 nautical miles.
(BTW, the name of the canoe is technically: Hōkūleʻa where the macrons (dashes over the O and U) lengthen the vowel sound, and the apostrophe mark is an ʻokina, which signifies a glottal stop. A lovely story from NPR: Hokule'a, The Hawaiian Canoe Traveling The World By A Map Of The Stars describing their voyages, and the skill of wayfinding, a traditional means of navigation that requires memorizing hundreds of stars, where they rise and set on the ocean horizon, and the particular patterns of waves in the open ocean.
Their website describes their navigation technique in some detail, and its role in the traditional Polynesian (and Hawaiian) culture. And yes, they do NOT have a GPS.
But they do post the current location of the canoe on their website with a live Google Map link. (As of October 3, 2016, the Hōkūleʻa is at the Haverstraw Marina, on the Hudson River, north of New York City.) You can follow the voyage with the hashtag:#malamahonua on Instagram and Twitter.
4. The Caribbean seems to be full of islands that are just slightly off the map. While flying there a few years ago, I remember seeing an island just east of Jamaica and west of Haiti. From the air, it looked like a perfect pirate hangout place--remote and mysterious. What is the name of this island? It also looked like a great place to put a lighthouse--is there one there? Where is it on the island?
This is an easy Maps Challenge. I just searched for Jamaica, zoomed out a bit until I could see Haiti, and then panned back and forth a bit. There's really only one island there--see it?

See that tiny dot about 2/3rds of the way to Haiti? Zooming in a bit and switching to Earth view mode reveals that this is Navassa Island. 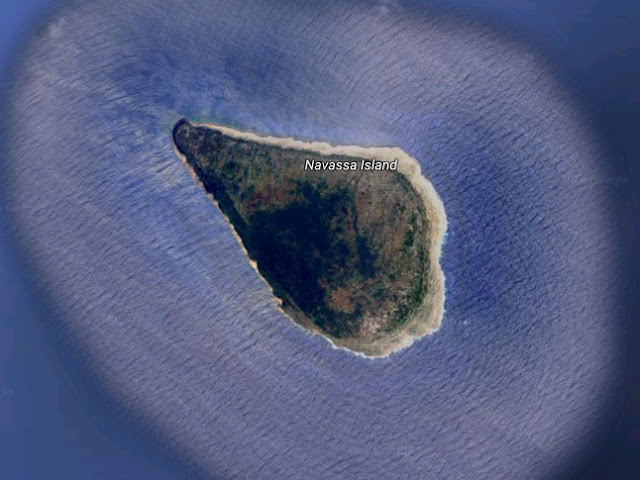 A search for the island's name tells us that Navassa is a small, uninhabited island in the Caribbean that is operated as unorganized / unincorporated territory of the United States, which administers it through the U.S. Fish and Wildlife Service as a National Wildlife Refuge. However, Haiti also claims the island in its constitution, disputing the U.S. claim from the 1850s.
It doesn't take much zooming and panning around to find the lighthouse located near the southern end of the island.
A search on Wikipedia shows this image, which puts it in perspective:
Of course, the really interesting part about Navassa is that it's home to several endemic animal species (that is, they only occur there--no place else in the world), and that it's one of the last places where you can find the endangered elkhorn coral (Acropora palmata) in an unusual form. This coral's populations have collapsed by as much as 98% throughout its range since 1980. The shallow-water coral typically grows in stands with treelike trunks and branches up to 6 feet long (hence the name). At Navassa, though, elkhorn has adapted to the island’s near-vertical underwater walls by growing in an unusual encrusting form that clings to cliffs and ledges.
This odd shape may help make the island a kind of genetic refuge. Coral can reproduce either sexually, by releasing gametes into the water, or asexually, when small pieces break off and grow into new colonies that are genetically identical clones. On Navassa’s underwater walls, any elkhorn “horns” that break off usually end up in water that’s too deep for them to take root, which limits the colonies to sexual reproduction. This unique situation gives the coral a high genetic diversity and a greater resistance to disease and the effects of climate change, including higher water temperatures and CO2 levels.
In this strange, out-of-the-way island there's some hope for the success of the species. If only the coral can find the way. Perhaps they need a bit of way-finding navigational arrows in the sea...
I hope you enjoyed this set of Challenges. I'll be back on Wednesday with another Challenge, and we'll start up again as always. This month we'll be focusing on some more different kinds of content, and the ways you can find and use them.
Search on!