Answer: What else falls from the sky?

It's remarkable what falls from the sky... 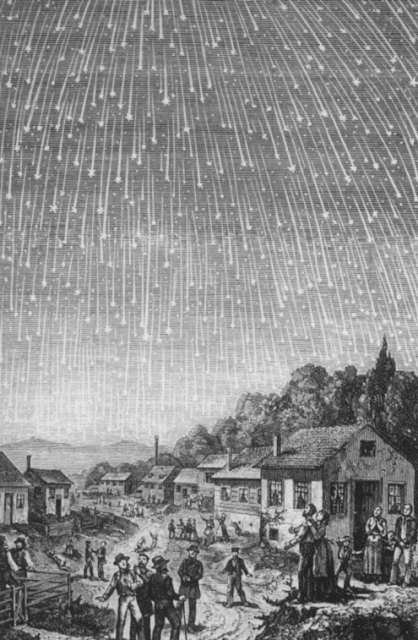 Last week I posed these Challenges about objects falling from the sky. Were you able to figure them out? Here's what I did to answer them...

1. As you can see in the above image, meteor showers (or as in this image, a meteor storm) can be impressive. But it took the world a remarkably long time to believe that stone really fell from the sky. Can you figure out when people started to believe that rocks really fell from the sky? (Hint: There's not a singular event for this, but you should be able to figure out when the common understanding of meteors / meteorites changed.)

A quick Search-by-Image with the above image tells us that this was the Leonid meteor shower of 1833. 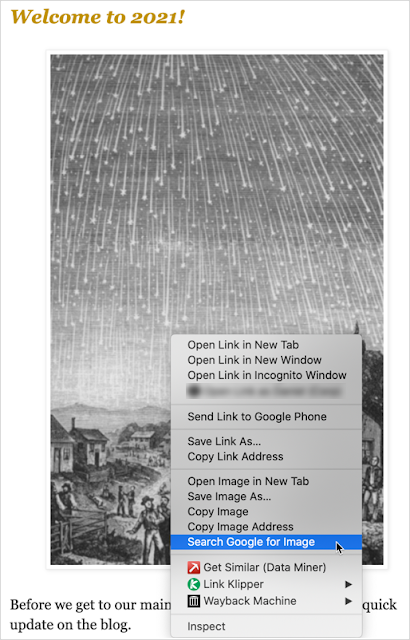 That's pretty straightforward, but how do you find out about some more complex question like this? ("When did people start to believe ...")
I wasn't sure how to start this out, so I tried the simplest query that I could work:
[ people believe in meteors ]
I chose this query because I figured that someone would have written something about the change in belief. Meteors are well known, and every so often one DOES fall in an inhabited area.
I was pleased to find a Smithsonian magazine article that people (in Europe at least) first saw rocks fall from the sky in L’Aigle in (Normandy, France) in 1803. At that shower, at least 3,000 identifiable stones fell. Not long before, a physicist named Ernst Chladni had published a book (1794) suggesting that meteorites came from space. He was reluctant to publish because he knew that he was “gainsaying 2,000 years of wisdom, inherited from Aristotle and confirmed by Isaac Newton, that no small bodies exist in space beyond the Moon.”
Meteorites have been known for a while (after all, even the Pharaoh Tutankhamun had a dagger made of meteoric iron), but making the connection between shooting stars and the rocks that could be found on the ground took time.
Reading the Smithsonian article made me think that another framing for this might be as story from history. So my next query was:
[ history of meteorites ]
Here I chose "meteorites" as a special term since meteorites are meteors that have made it to the ground. So I thought looking up the history of the idea would be useful. I was rewarded with the Wikipedia article on Meteorites. In there we find this section:

"...[Chladni's] booklet was "On the Origin of the Iron Masses Found by Pallas and Others Similar to it, and on Some Associated Natural Phenomena."

(Side note: We've talked about Peter Pallas before.)

"In this booklet he compiled all available data on several meteorite finds and falls concluded that they must have their origins in outer space. The scientific community of the time responded with resistance and mockery. It took nearly ten years before a general acceptance of the origin of meteorites was achieved through the work of the French scientist Jean-Baptiste Biot and the British chemist, Edward Howard. Biot's study, initiated by the French Academy of Sciences, was compelled by a fall of thousands of meteorites on 26 April 1803 from the skies of L'Aigle, France"

I found this fascinating: Chladni figured out the meteor / meteorite connection by data analysis. That work was then replicated by Biot and Howard, driven by the L'Aigle meteorite shower!

But the bottom line seems to be that European science (and the populace as a whole) didn't really accept "rocks falling from the sky" as a real thing until around 1800.

2. As it turns out, it's not just stones that fall from the sky, but lots of other things as well. Fish are particularly common. Can you find a compelling / plausible / believable example of fish falling from the sky? (No, Sharknado doesn't count...)

Searching for [ fish fall from sky ] leads to a whole host of web pages documenting various kinds of fish falling out of the sky. The trick here is to find sources that are credible. The Wikipedia page for Rain of animals documents many instances of animals falling from the sky, starting with Pliny the Elder reporting frogs and fish. Meanwhile, residents of Yoro, Honduras, claim that "fish rain" happens every summer--something so common it's called Lluvia de Peces.
The New York Times article (July 16, 2017) discusses rain of fish in Yoro, although they point out that nobody has actually seen fish fall from the sky. (It could be an upwelling of water + fish from underground sources. Other good sources include a brief from Western Texas A&M university, Australia Geographic, Science, and NPR. The most common explanation has to do with fierce dust devils or actual waterspouts (tornados over water) that pick up surface fish from a body of water and then drop them at a distance from the source. Interestingly, the fish falls seem to be fairly limited in scope (something like 300m by 30m) and always of fish that can be found in nearby lakes and streams. It's fairly easy to find mentions of fish-rains in Google Books (e.g., The Tornado: Nature's Ultimate Windstorm).
So, yes, fish can fall from the sky--not as a supernatural event, but through a little wind-assist!

3. Can you find a place where diamonds rain down from the sky? How is that even possible?

This seems implausible at best, fanciful even. But I took up the Challenge with a simple question:
[ where do diamonds rain from the sky? ]
Much to my surprise, I found a LOT of results. Here's the SERP I saw: 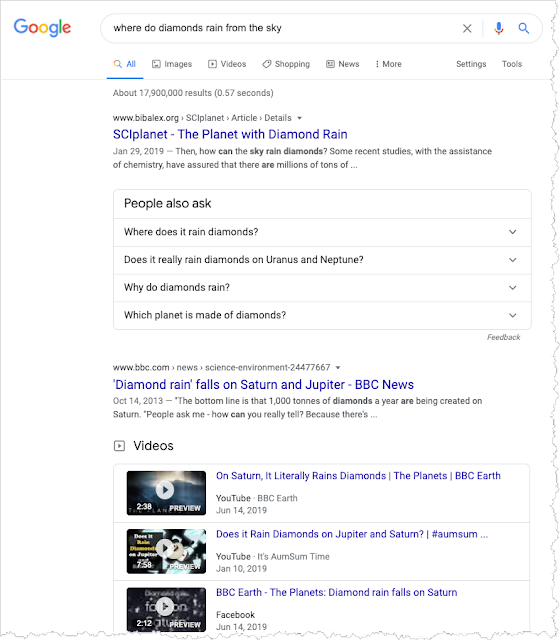 As with the fish-rain Challenge, the question really is how reliable are these sources? (I mean, it seems like a crazy question!)
A BBC Earth documentary video on this Challenge can be found on YouTube:

The video describes weather on Saturn and Jupiter; there are gigantic storms with massive electrical discharges--all that lightning transforms methane into huge clouds of soot (carbon), and, as that soot falls downward, the pressure and heat is so great that the carbon crystallizes into diamonds. Then, at 40,000km below the surface, it all starts to liquify.
Fascinating--but believable?
This let me take a close look at the first BBC hit reported on diamond rain on Saturn and Jupiter, but more importantly, this article gave me a link to a paper in Nature (the science journal). "Diamond drizzle forecast for Saturn and Jupiter" Maggie McKee (Oct, 2013). This in turn led to another paper by Mona Delitsky and K. H. Baines. "Diamond and other forms of elemental carbon in Saturn’s deep atmosphere." American Astronomical Society, DPS meeting #45, (Oct. 2013).
As this article points out, "At the boundaries (locations of sharp increases in density) on Jupiter and Saturn, there may be diamond rain or diamond oceans sitting as a layer. However, in Uranus and Neptune, the temperatures never reach as high as 8000 K. The cores are ~5000K, too cold for diamond to melt on these planets. Therefore, it appears that diamonds are forever on Uranus and Neptune but not on Jupiter and Saturn."
Yes, there are probably diamond-laden beaches on Uranus and Neptune, while on Jupiter and Saturn it rains diamonds, but as they fall deeper into the higher temperatures of lower layers, they liquify into carbon rain.
But how can we be sure? As one of these articles pointed out, "the chemistry is fairly well-understood, so we're confident in these predictions..." I'm not a high-temperature / high-pressure chemist, but I believe people who are.
So I believe in diamond-sand beaches, and diamonds falling as rain...

There are a couple of things to note here...
1. When looking for something as abstract as a belief change, you need to look for documents that record the shift. Often this involves looking for histories of the event. If you're lucky (as we were here), you can find a small number of documents that record the first event, the first expressed belief, and the solidification of that belief. It might be a little more tricky to find slower changes, or ones that are less well documented!
2. Asking the question in a question form is becoming a really valuable technique. A question like "where do diamonds rain from the sky" isn't handled as a conjunction of terms, but is handled by a question-answering facility--this is incredibly useful for finding concepts that you might not know quite how to express! (Interestingly, I found other planets where it rains rubies and sapphires. You never know what you'll find until you look!) Notice that if you ask a silly question, Google will give you results (e.g., [ where does it rain palm trees? ]) and NOT answers to your questions. It's an important difference.
Search on!