Dan Russell • October 12, 2015
SearchReSearch
Republished with permission from SearchReSearch
Answer: What does this sign indicate? Dan Russell
Mysterious signs...
... are everplace in our lives; this just happens to be one that I got curious about. And as it goes with human cognition, once I saw this sign while running, now I'm seeing it just about everywhere I go. More generally, once you've solved a Search Challenge like this, you'll start to see LOTS of signs in the world that you do not recognize. One of the skills to learn in this Challenge is how to identify those previously unknown signs and symbols.

As I said, it's just out in the middle of a field near a nice trail.
Then, looking south east from this marker, I saw the following hillside:

1. What does this sign indicate? Why would someone post this in the middle of an empty field?

2. What's up with the two trails to the south? Why are they there?

3. Can you figure out why that small caution sign is there in the middle right of the first picture above?

What's the sign indicate? To solve this, I right clicked on the image (or Control+click) to get the URL for the image. I want to get the EXIF metadata from this image, and my first search after copying the image URL is for: [ exif metadata viewer ] (Remember this from an earlier SRS post?) The first one on my results list is Jeffrey's EXIF viewer.

When I drop the URL into the box, I see this: 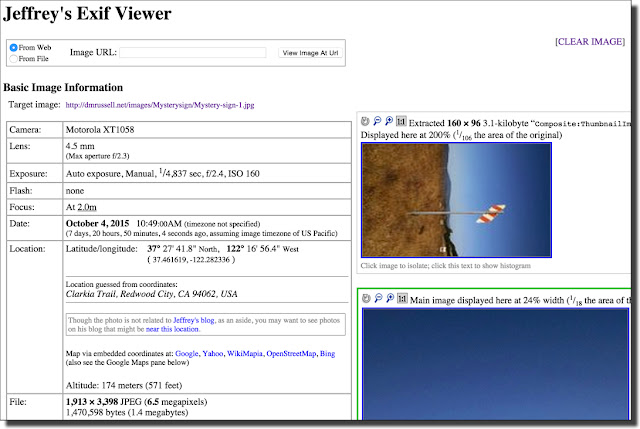 I just drop those into Google Maps and see: 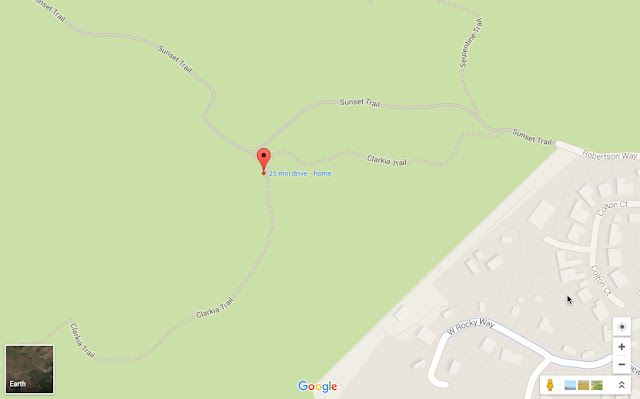 Now click on the "Earth" view button (lower left) to see what this place really looks like: 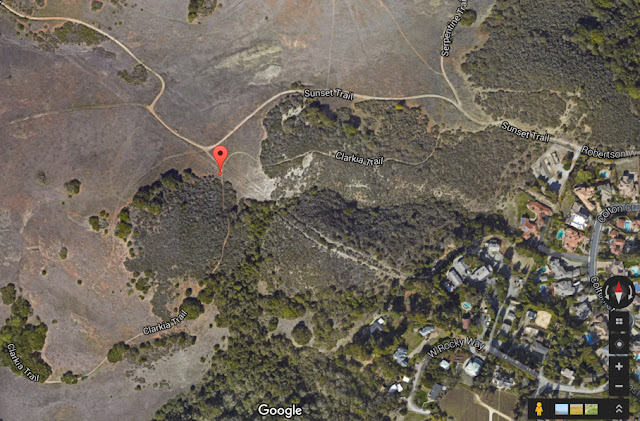 The red bubble is the location of the camera when I took the picture. If you zoom in, you can see the shadows of the sign... (number 1), and of another sign right beside it (number 2). 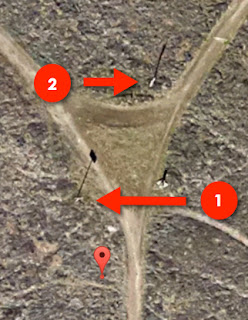 Now... what's going on there? What could those signs indicate?

which gives a nice set of results, the 5th of which is:

This looks interesting--maybe it's what we're looking for in Challenge question #3!

This article tells us that:

"Pacific Gas and Electric has begun hydrostatic pressure testing on the pipeline located in Edgewood County Park and Natural Preserve and will continue until mid-November, according to San Mateo County Parks Department officials.

Work will take place in three locations along the Sunset, Edgewood and Serpentine trails and at the Clarkia trail junction. The park’s Sunset Trailhead will serve as the access point for project crew and equipment. Pipeline testing is expected to be completed in mid-November. Trails will be open during the project. However, periodic trail closures will occur when equipment, including PG&E and contractor trucks, must be moved. Signs will be posted on trails when this occurs, according to the Parks Department."

From this we get two big clues about the Challenge: First, that the sign in question might well indicate the presence of a gas pipeline, and second, that they will be posting signs when this happens. Note that the date of the posting is August 27, 2015--not that long before I took the photo.

Can we find a map of the gas pipelines?

takes us quickly to their interactive gas pipeline map. Here, I've zoomed into the Edgewood Park area. Take a look: 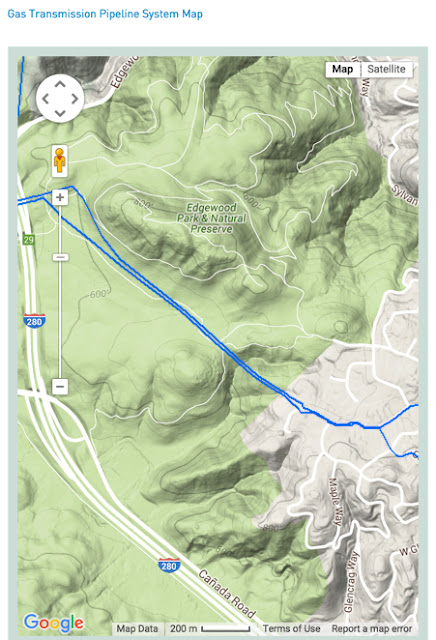 FWIW, this is as close as the PG&E map will let me zoom. But you can see that there are 2 pipelines going right through the intersection of the Clarkia and Sunset trails.

So now we know that there are gas pipelines there, and that work is currently going on to test them. Let's double check to see if that diagonal orange/white sign actually means what we think:

leads us to a page that comments on these markers. "The markers, 10-foot poles with an orange and white striped “paddle,” are placed in agricultural areas in particular, and indicate the approximate location of the underground pipeline, serving as a reminder for people to be careful when working nearby. The paddle markers are aimed at providing a more visible line of sight indicator for both landowners and PG&E. The paddle part points downward to the location of the pipeline." (These markers are important. More than one disaster has happened because a construction crew dug up a high-pressure gas transmission line.)


By doing a simple follow-up search, we can learn a lot about the pipeline through Edgewood Park.

We can learn the numbers, and again, from a Friends Of Edgewood Newsletter:

"PG&E is required by the California Public Utilities Commission (CPUC) to perform occasional safety testing on their pipelines. In the case of Line 109, the older of the two lines that run through Edgewood, this testing consists of removing gas from a segment of the line, then filling it with clean hydrant water, pressurizing it to 150% of the normal gas pressure, and assessing its integrity. This procedure is called hydrostatic pressure testing, or simply hydrotesting.
In order to do this test, PG&E needs to access the pipeline by digging at 3 different locations inside the park (and at a 4th location just outside the park in Woodside).

2 of the digs are 6’x6’ “sniff” holes that we expect will create minimal disturbance, but the third dig is a much larger “bell” hole that will cause a greater impact. Referring to http://photos.foew.org, the locations are:

First sniff hole. PG&E refers to this location as Location C. It is at the intersection of the Clarkia and Sunset Trails in map quadrant L-11...."

(Emphasis mine.) Their annotated map is at the bottom of this page:

Now, what about the 2 trails? By looking at the Earth view up close, you can see that these are the tracks of pipelines 109 and 132.

Just out of curiosity, I looked up [ PG&E gas pipeline 132 ] and discovered a PG&E map showing where it runs, along with some color coding to indicate if it's been tested recently, or if it's under review. Somewhat disconcertingly, both of these pipelines run within a couple of blocks of my house! (And worse, they're a couple of places marked in orange, meaning "Pipeline segments in high consequence area under review. Good to know they're testing these pipes!)


But I digress. We've found the answers. The sign is a marker for a high-pressure gas pipeline owned by PG&E. The two trails are the access roads for pipelines 109 and 132. And the caution signs on the trails are to mark the presence of sniff holes so the testing can proceed.

1. EXIF metadata is your friend. Especially for photos that are in the middle-of-nowhere, grabbing the metadata (such as through Jeffrey's metadata viewer) will get you started. Once you have the lat-long you can...

2. Make use of places and names found on the maps. In this case, we used the name of the park (Edgewood) and the trails (Clarkia and Sunset) to find other articles about work going on in that location. Note that we also checked the date of publication and when the work was going on. (It would have been less helpful if the newsletter had been from 2 years ago, but we were lucky in that it was current.)

3. Image search for a marker is easy, especially if you know what kind of thing it's marking, OR the company name. Interestingly, search-by-image was difficult to do with this image. I tried various clipping / cropping and nothing really worked well. But searching with a very descriptive query, [ orange white stripe sign gas pipeline ], actually worked very well.

This was a great Challenge. Hope you enjoyed it as much as I did!

P.S. And just as a bit of ground truth, here's a picture of the OTHER sign (sign #2 in the above Google Earth image). We were right! 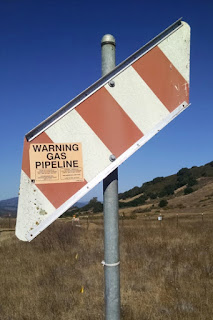