Answer: What does *that* mean?

... although sometimes you'll hear people say dismissively "it's just word" or "it's all just semantics," they're missing the point. Words, and the specific meanings of words, really DO matter.

One of the interesting phenomena during the last news cycle is that heard all kinds of terms and phrases that you might not have quite understood. That's partly because people whip up new terms as a way of creating catchphrases or generating memes that people can have in mind.

But we're SearchResearchers--we tend to look things up. You do, don't you?

This was our Challenge for last week:

What do each of these terms mean in the current political context?

I know I heard and read all of these. But as I read, I'd sometimes pause to look these things up. (And yes, when I'm reading, I usually have my phone with me for just these kinds of checks and clarifications.)

The simplest way to find out some of these terms is just to look them up as simple phrases. for instance,

I used quotes here to make sure I didn't find anything that wasn't exactly this phrase. In the results, you see first a definition, and then enough current news items and discussion to be able to learn that an "anchor baby" is when a "noncitizen mother" travel to the US specifically to deliver that child an American land in order to give it "birthright citizenship." 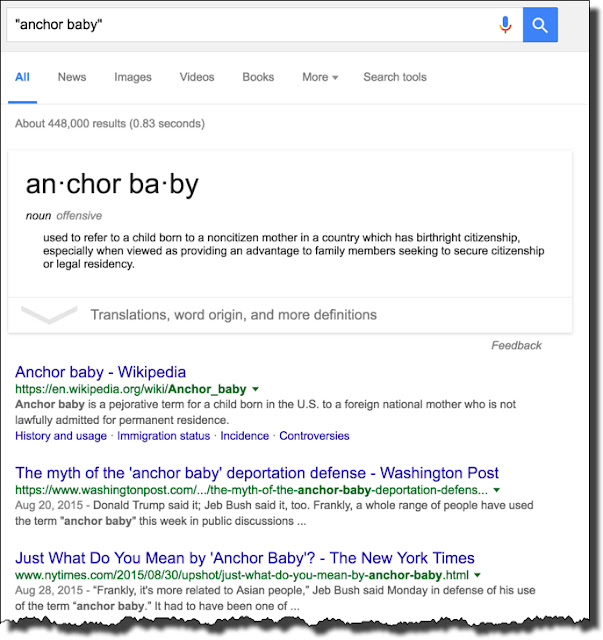 This one is fairly straightforward--just search for the phrase, and you'll quickly learn enough to understand both the idea AND the political context in which it's being used.

In the same way, the term "servergate" is a newly coined term, and sufficiently unusual that you don't need to quote it for search purposes: 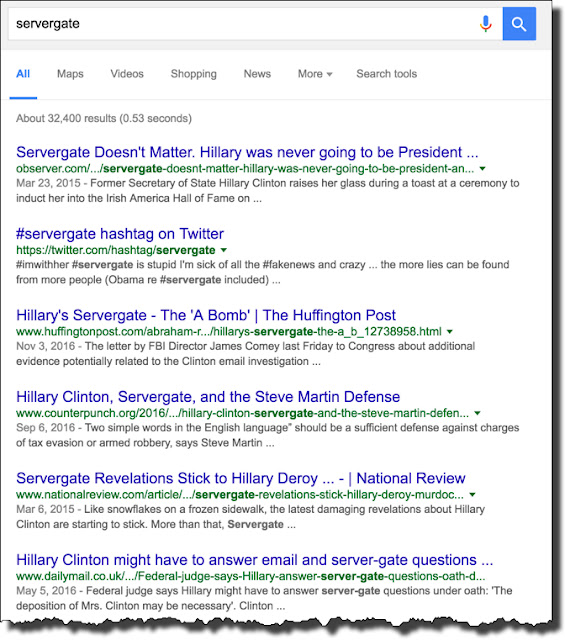 This new term refers to the difficulties Hillary Clinton has had over her use of a private email server while she was Secretary of State.

If you're not from the US, you might wonder why you'll hear "something--gate" as a common phrase for a political scandal. A great method for finding this out is to do a query like this:

which will then show a nice short summary of the meaning: 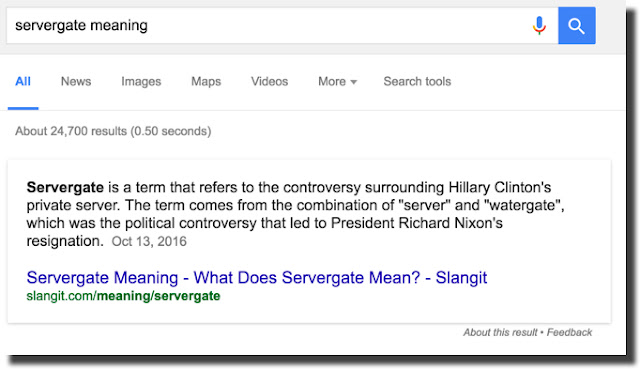 Note that this query pattern works for many other terms and phrases you might not have thought about:

including terms that we're looking up in this SRS Challenge: 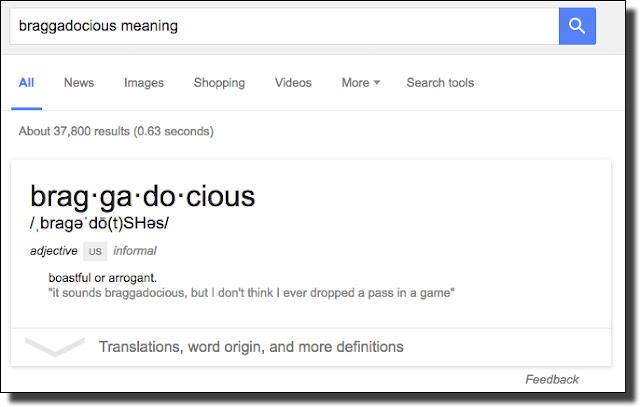 Notice that downward pointing gray arrow? If you click on it, you'll see additional information about that word ("translations, word origin, and more definitions"). It looks like this, 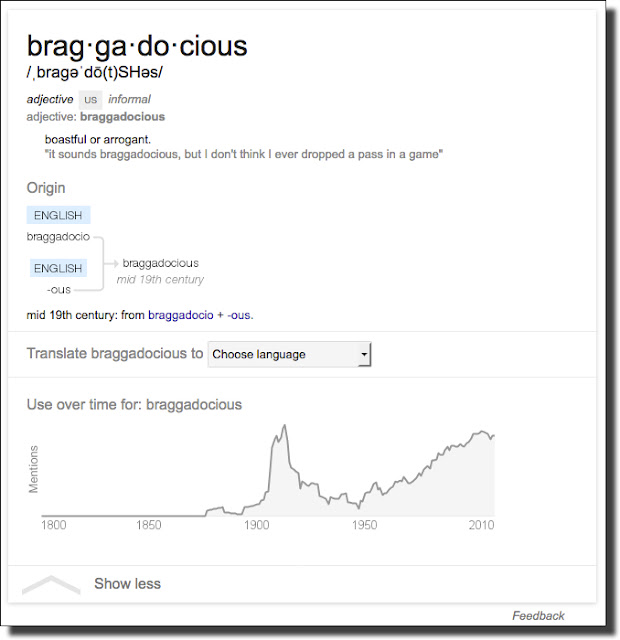 This tells us that the us of the word "braggadocious" predates this election, and was coined sometime in the late 1800s.

"Clickbait" is a term that you should know. A quick query like this:

tells you that it means "internet content, especially that of a sensational or provocative nature, whose main purpose is to attract attention and draw visitors to a particular web page."

In the political context, it's sensationalistic or outrageous texts or images that will attract you from whatever it is you're trying to do.

The simplest way to get a sense of what clickbait might be is to ask for examples:

which will show you lots of examples of headlines and texts that serve to pull you in. You'll quickly learn that phrases like "What we found was shocking" or "Big companies hate him" or "What happened next was awful" or "5 examples of great clickbait" are all written expressly to get you to click. Notice that they are often incredibly vague, but kind of irresistible. But once you learn what clickbait is (and it's often used in political advertising), you'll know enough to resist it.

We can use these same methods to understand what SEO is.

Teaches us that SEO is "Search Engine Optimization is a method of strategies, techniques and tactics used to increase the number of visitors to a website by obtaining a high-ranking placement in the search results page of a search engine (SERP) -- including Google, Bing, Yahoo and other search engines..."

That is, it's what SEO people do to web sites to improve their ranking. Obviously, this is a good thing (if you a company... or a political candidate), and the trick for people who do SEO is to do it in a way that doesn't actually hurt the website's ranking.

It's kind of an ongoing battle: the SEO people get paid to make their customer's website appear higher in the SERP ranking, while the search companies (Google and all the rest) work hard to minimize the influence of any manipulations the SEO people make. Google publishes clear guidelines (Webmaster guidelines) on what makes for a good website (in short, create content for people, not search engines).

So now we have some methods to tell us what a "dog whistle" is in the current political environment.

That query shows us a definition: "Dog-whistle politics is political messaging employing coded language that appears to mean one thing to the general population but has an additional, different or more specific resonance for a targeted subgroup."

And the first hit is to a Wikipedia article about dog whistle politics. This is "coded language" that reaches one set of readers who understand it to mean something very different than the overt meaning.

To get examples of dog whistle messages, you can do a query like:

but notice that you'll get many examples from earlier elections. So you might want to add in the current election participants to get current examples:

A great example from the previous Obama election was the repeated use of his middle name in lots of political messages by the opposition. You probably know that it's Hussein. Now, did ever you know John McCain's? (Sidney) Did you ever know Mitt Romney's? (Ah, gotcha: Trick question. Mitt is his middle name. His real first name is Willard.)

There is a reason you know Obama's middle name but not McCain or Romney's. It's because reminding everyone that Barack Obama has a scary foreign-sounding name, that ALSO sounds Islamic, which happens to be the same as that nasty dictator. This plays really well with a certain audience. It's a kind of "dog whistle" to that part of the population, casting doubt on his ability to be president.

1. Look it up! This is obvious, but I see people reading all the time, glossing over language that they don't understand. Keep asking yourself, "what DOES that word mean?" This is an important reading strategy. If, by the end of the article, you can't summarize it, or explain what each of the words and phrases mean, you've missed an opportunity to learn something.

2. Use DEFINE or MEANING to get short definitions. These are triggers for Google to give you a short summary or definition. These work not just for individual words (like "braggadocious") but also for phrases such as "anchor baby" or "fourth estate."

3. Look for Examples. For many complicated ideas, sometimes the best way to understand is to get examples of the concept. If you're still uncertain after looking up the definition, search for [ examples of ] -- that will often give you some nice examples of what you seek.

This whole topic (of how to lookup terms and phrases) is a crucial part of giving students a tool with which they can understand almost anything. If they have this, then a world of new texts opens up to them.

When I wrote above that I read books with my phone in hand, I'm completely serious.

I was at my favorite coffee shop this past rainy weekend reading about the history of the Silk Road (Shadow of the Silk Road, highly recommended). In the space of one chapter, I had to look up 12 different things. Sometimes they were really obscure (the Kunlun mountain range, one of the largest in Asia), but sometimes I'd look up words that I sort-of know, just to check. For instance, I looked up "ochre" which I thought I knew, but when I looked it up I learned that it's an earthy pigment of ferric oxide and clay, varying from light yellow to brown or red, although typically a pale brownish yellow color. It changed my understanding of what I was reading.

If I do this, I bet your students should be doing this as well.

An important skill to master is that of not getting sidetracked while reading. This is whay understanding clickbait is important. When you go to lookup a term, remember that your goal is to READ the book and understand it. Do Not Get Sidetracked. (While I'm all for tangents, when you're studying to learn, you absolutely need the executive skill of staying on task. Look up that word, and get back to reading.)

Search on. (But don't get distracted!)