Answer: What are those wheels doing

Dan Russell • December 21, 2018
SearchReSearch
Republished with permission from SearchReSearch
Answer: What are those wheels doing Dan Russell
There's a lot of construction going on...

... and so there are a lot of cranes in the local Google landscape, including a bunch of very tall, very large, and very odd ones.

So I was surprised when I saw tall poles on the construction site with what looks like wheels on the top.

The obvious question: "What are these things?" Here's the original picture, and a closeup of what look like big bicycle wheels at the top of several of the vertical posts.


Here's a better, closer-up picture that I took yesterday... 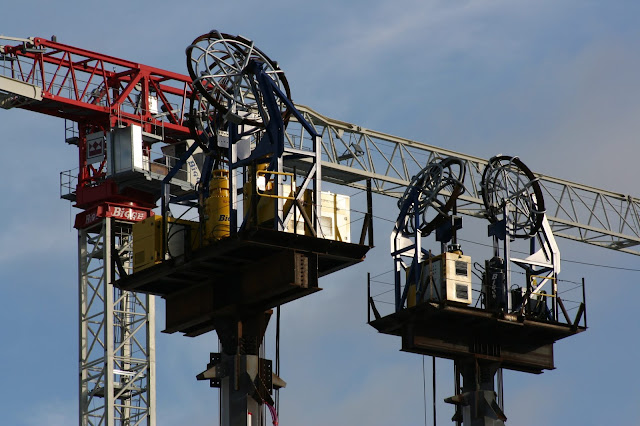 How about these pictures? In this one, you can see the wire ropes going up into the wheel--so we now know it seems to be something more like a reel (or spool). 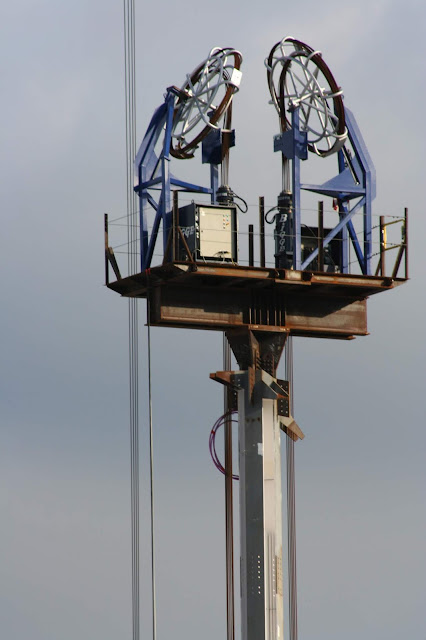 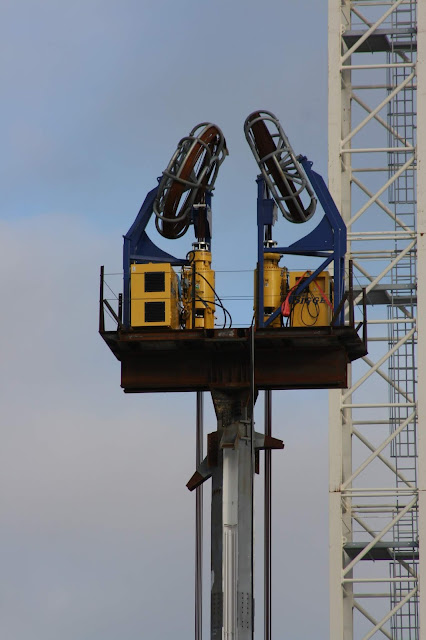 1. What are these mysterious wheeled poles called? Why are there wheels on top? What do they do?


I finally figured it out, but it was a bit tricky. On the other hand, Regular SRS reader Jon (the Unknown) figured it out fairly quickly. In his first comment he wrote:

I got it before you posted this better image just now.

After a long, but interesting trawl thru construction sites of stadiums--I could see what looked like a floppy roof on the ground between them--I got onto roof lifter sites then found mention of 'strand jack'. Never heard of this but a quick click on images of strand jack I found lots of image hits like this one:

While that was great, I wanted to know more. So I wrote to Jon and asked for more details. He graciously replied with an amplified version of his SearchResearch process (lightly edited by me):

The scene you showed looked to be construction of an arena with an inflatable roof system; there are 8 of those wheely units around what I thought to be the roof cover. Spaced, I thought, just so, for that purpose.

So off I went with "construction crane parts" then I wanted to know how tower cranes extend and retract.

Back to your wheels now: "construction wheels on columns" then "to lift an inflatable roof with" and because you were close to it I started thinking to look in your area for a stadium being built which led to [ stadium san jose ] and [ Avaya stadium roof ]

Then sidetracked by ROOFLIFTERS and how entire solid roofs are lifted.

Back to the mainline: [ stadium construction lifting inflatable roof with ]
and then sidetracked again by Tottenham Hotspurs on Instagram "roof lift" -- it's then that I see the first notice of a thing called a "strand jack"

Hmmm... Whats that? Then did a search for [ how strand jacks work ] finding lots of hits and leads. Then I ask [ strand jack recoiler ] which seems to be those wheels.

I also tried to find why the re-coilers are tipped. but could not find explicit reasons. So, back to my days working around wire rope and cranes and spools and winches. I think tipping helps to keep the strands clean and allow the natural lay or tendency of the strands, which are now not under tension, to lie in a natural way which also kept the pressure on most of the strand to not unwind.

So, what you (Dan) asked about are the recoil wheels. As the cable is pulled the excess can be wound around the wheels you see. Going the other way the wheels with strands of cable feed the jacking system. Used for very heavy lifts apparently.
Great way to spend on hour on a rainy rainy day.

In my case, I futzed around for quite a while with combinations of search terms like crane, tower, wheels, etc.--mostly not finding anything. But then I found something interesting. Here's my recap of what finally worked.
Like Jon, I also (finally) figured out that this is probably a project to lift a roof. So I started with:
[ how to lift a roof ]
which gave me a lot of not great answers (they were mostly about how to lift small roofs). So I modified my query to avoid the "small roof" problem by:
[ how to lift a large roof ]
In the process, I noticed that a couple of the roofs were being lifted by hydraulic jacks. This was my ah-ha moment: "maybe," I thought, "this isn't a crane at all, but some fancy jack thing..." Could it be a hydraulic jack on a tower?
My next query was:
[ how to lift a large roof with a jack tower ]
which led to several web pages (e.g., "Dorman Long Jacking Towers") which had images like this:
Those reels and cables look a lot like the images above, the ones that caused the original Challenge. And there's a terms that's new to me--strand jack. What's that?
Like Jon, I first checked out the idea:
[ "strand jack" ]
(I double quoted it to find JUST strand jacks, both of which are common terms--but I only wanted that particular term.)
Guess what I found?

In particular, this sounds about right: The strand jack is a way to lift heavy loads with multiple jacks for construction. What's more, the yellow cylinders I see in the construction site images look a lot like the image above.
A quick image search with this query tells me that I'm getting close:
[ how to lift a large roof with "strand jack" ]

Now that I know this, this image now makes sense--these towers are strand jacks that will pull up the roof, a little bit at a time.
The cables go below and attach to a corner of the roof. Then, controlled by a master computer, all of the jacks lift their corner of the roof in parallel.
As you can see in the pictures below, the roof IS moving upwards!

How does this work?
It's a bit like pulling up a weight attached to a rope by hand. That is, you pull up with one hand, reach down, grab the rope with the other hand, pull that part up, and repeat.
Here's a wonderful animation from the Wikipedia article on Strand Jacks.
What I called "wheels" turn out to be more like reels or spools onto which the excess cable goes. A quick search for:
[ "strand jack" reel OR spool ]
quickly led to some useful images, like this one from Dorman showing the relationship between the strand jacks and the excess cable takeup reels. Here you can see the cables coming up from below, passing through the strand jack, and then up and into the takeup reels. 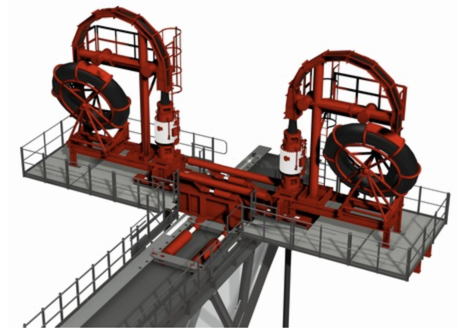 And, as Jon found out, these are often called "recoilers."
Know we know: The "wheels" are recoilers that take up the excess cables from the strand jacks that are (literally) doing the heavy lifting on this roof construction project.
And, here's a great video showing the strand jacks pulling up a very heavy load (a section of the new Oakland Bay Bridge), and the recoilers being used. (I didn't know the cables were wound up by hand, or as you can, by foot. In any case, there doesn't seem to be any motor involved!) Enjoy.

This was an excitingly tricky bit of research to do. Here are a few take-aways:
1. Sometimes you need to take a broader view of what it is you seek. In this case, I really did NOT know what these things were. I had to start my searches for things that lift roofs... and work outward from there.
2. When you see a term you don't know, check it out! They're often terms (like "strand jack") that lead you to identification of the thing you're searching for.
3. Once you know the term, consider looking for images or videos that show the thing in context. It's an incredibly useful trick to verify that what you're seeing actually IS what you think it is.
Next week I'll spare you a Challenge to work on, but I will write a longer note about this particular SRS Challenge and reflect on the past year's worth of research.
Search on!