Answer: What are those smoke plumes?

Dan Russell • May 4, 2016
SearchReSearch
Republished with permission from SearchReSearch
Answer: What are those smoke plumes? Dan Russell
When you're searching...
... for something that has no obvious connection, and is imprecise as well, you need to leverage every bit of information given.
Let's think about what information we have:
Time/Date: February 18th, 2016, in the early afternoon

And then later (with the additional hint) we found out that we could pin down the time and location even more precisely: 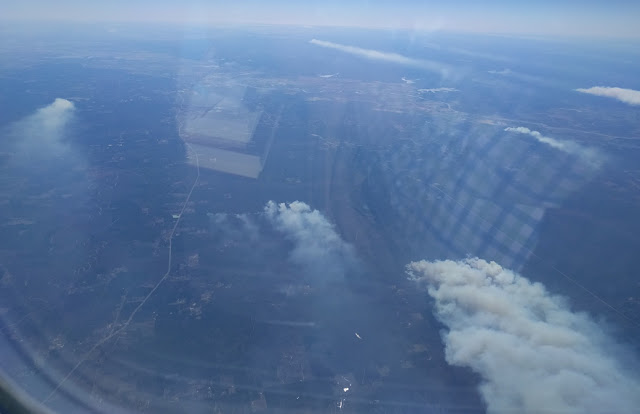 1. Can you identify WHY it looks like half of Alabama is on fire? What's going on in this photo?

What can we do to pin down the exact location? (And why do we want to do this? Answer: Trust nobody, especially in their estimates of time and location...even me...)

This isn't hard, but you need to know that there are flight tracking websites that let you enter a flight number (e.g., AA 2820) and then you can see the flight track. The simplest query is:

which will give you a long list of them. I used FlightAware.com, which also provides historical flight track data. (I didn't want to pay to go all the way back in time, so I chose a representative flight so I could estimate the position.)

The FlightAware system tells you what the scheduled time of departure was, and the actual time. It tells us that it's a 90 minute flight with a scheduled departure of 12:10PM, but a common delay of around 20 minutes. So, if the flight left at 12:20PM, the flight would be where at 1:20PM? Answer: It would be about 60 minutes into a 90 minute flight, or about 2/3rds of the way to Tallahassee. In the figure below, I've taken the flight path from FlightAware and added red arrows, each exactly 1/3th of the total distance. As you can see, the 2/3rds point is just as the flight crosses from Mississippi into Alabama.

A little map to remind you of the layout of the US southeastern states: 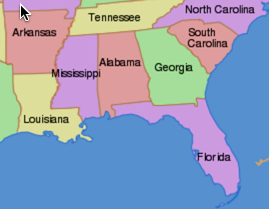 Is there any way we can verify that there were large numbers of smoky fires burning on that date?

You could check lots of local newspapers for air quality reports, or stories about smoke in the air--but a simpler way would be find a satellite image for southern Alabama on that day. How would you do that?

My first query was for:

NOAA's hazard mapping system. There's a TON of content in there, but in particular, it was reading around there that I learned about NASA’s WorldView. It's like Google Earth with worldwide archival satellite coverage. (When you try it, be sure to turn on the "Corrected Reflectance" layers by clicking on the eye icon on the left side of the layer.) Once you do that, you can cruise through time and space to see remarkable images of almost any place on earth, going back in time quite a while... Here's the way the west coast of North America looked on May 1st, a glorious day in California... and Washington... and Oregon... and Baja California... 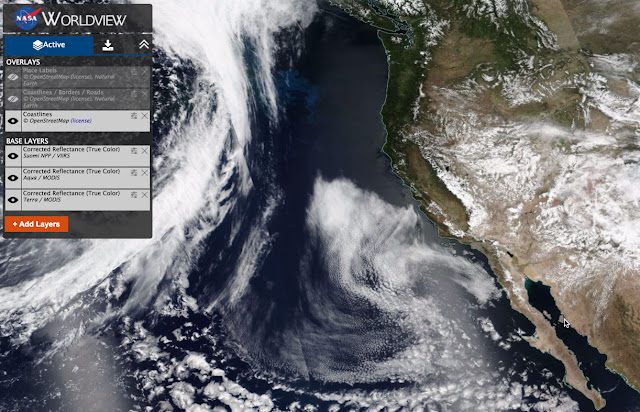 More to the point, we can use this same WorldView to look back in time to Feb 18th. If there are smoke plumes, we should be able to see them, yes?

Here's the link to the way Alabama looked at midday, Feb 18th, 2016. (Image below. Note that I’ve turned on TrueColor; set the date, etc.)

Notice ALL of the plumes of smoke. There's a lot of burning going on. 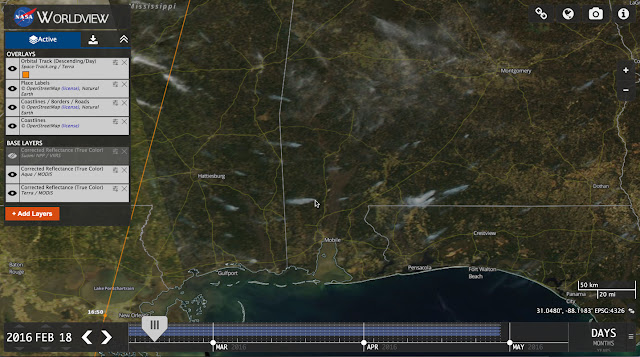 I also discovered by reading around on that NOAA site that I can also download a SMOKE or FIRE KML file from NOAA for that same date. If you import this Feb 18th KML file into Google Earth, you'll see this display (notice that this is a Google Earth view--the file includes the NOAA logo in the upper left): 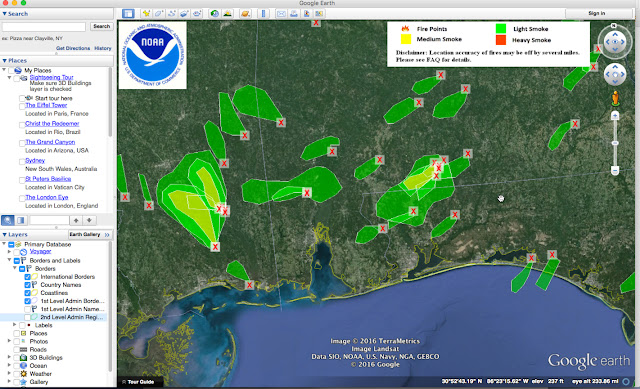 This confirms that these really are plumes of smoke from fires.
Now think about this: If there really were this many wildfires in Alabama and Mississippi, you would have probably heard about them. But I don't recall anything like this at the time, so a more plausible explanation is that they're agricultural burns.
How can we test this? I like Ramon's solution for this, where he used the intext: operator to require that Alabama be in the text of the web page.
[ smoke plumes intext:alabama february 18 2016 ]
this finds a number of news articles covering controlled burns, tire fires, and a few wildfires.
But an important skill is picking up the language that's used. In this case, I read an article that talked about smoke coming from a controlled burn. So I modified the query to be (and this is almost exactly what AlmadenMike did):
[ controlled burn intext:alabama february 18 2016 ]
which leads to a number of stories about controlled burns (such as this one, at Grand Bay, AL, that got away and turned into a bigger fire). If you lookup Grand Bay, AL, you'll see it's one of the plumes in the satellite image above.
I also really liked AlmadenMike's extension to the search process. He suggested that you "...add "permits" to the search terms... [this] finds a US Department of Agriculture/Forest Service website about controlled burns within local national forests, including the Conecuh NF (NE of Mobile)..."
Nice idea.
So I think we've shown pretty conclusively that these are mostly controlled burns, although a few have run away from their tenders.

1. Sometimes you have to actually know something about data resources. To solve this Challenge efficiently, you have to know about systems like FlightTracker or FlightAware, or at least be willing to search for their coverage... and know that they keep archival data for flights around for quite a while.
2. Carefully reading data descriptions can often lead to other resources. It was only by reading the text of the descriptions for the NOAA that I learned about NASA's WorldView (which I should have already known about--I won't forget it now).
3. Triangulation from multiple information sources is a great idea. Here I wasn't really sure about the location of the image (over Alabama? over Mississippi? over Florida?)--I thought I had it right, but getting the time of the flight, and doing a quick calculation confirmed that I was right over the AL/MI border. That was doubly confirmed when the NOAA images and KML file showed fires almost exactly where I could see them from the plane. Each data piece fit into the whole picture... and it was all consistent. (Notice that this worked out here--think about what you'd do if it did NOT work out?)

These kinds of Challenges ("here's a picture.. what's going on?") are wonderful for developing curiosity and thinking about what information resources you can tap into to solve the Challenge. The biggest problem that students have is that they just don't know so many resources. Consider creating teams of students to work on "find this" Challenges--and give them a couple of days. I predict they'll solve most of the Challenges by learning HOW to find additional information resources. And that's the best lesson of all.
Search on!