Answer: What are these signs and symbols?

Dan Russell • October 26, 2015
SearchReSearch
Republished with permission from SearchReSearch
Answer: What are these signs and symbols? Dan Russell
I'm going back to Cape Breton one day...
... largely because I'm not sure I've been to a friendlier place. I had lots of conversations with people I met there--just chatting about life in Nova Scotia and what it's like to live there.

But this week's Challenge wasn't about the conversations, it was about a couple of slightly obscure cultural details. I turned these into Search Challenges because I often find that questions like these are difficult to answer, usually because you don't know how to start. I mean, where do you start with this first Challenge question?

1. I kept seeing telephone poles that look like this. Why? What's up with this design? What does it signify? (And... for the curious folks, why does this make me think of Louisiana?)

To answer this question I just did the obvious first search, using terms that described what I saw. (Note that I didn't include the term "telephone pole" because I wanted to start broadly, and I wasn't sure if they called the pole a "telephone pole" or something else--better to start broadly and then narrow down).
[ nova scotia gold star blue red white stripes ]
Luckily, this let me to the Wikipedia list of Canadian flags, which includes a description (and image) of the Flag of Acadia, which looks exactly like this telephone pole. (It's worth knowing that I saw this flag a LOT in the St. Peter's / L'Ardoise region of Nova Scotia.
And, for confirmation, I found this flag on the inside of the building behind the telephone (in the image above). 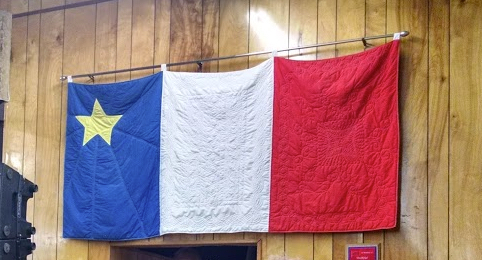 Here's the location of the telephone pole in Cape Breton:

And the StreetView of the Community Center, with the pole obvious in the foreground: 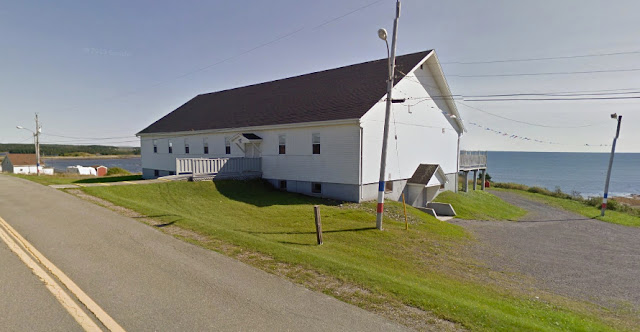 As for the connection between this part of Canada and Louisiana, I did the obvious search:
[ Acadia Louisiana ]
which led me to read about Acadia Parish in Louisiana, which includes the sentence:

The name of the parish is derived from the former French colony of Acadia in Canada (which consisted of the modern provinces of Nova Scotia, Prince Edward Island, New Brunswick, and much of Maine) many of whose French-speaking inhabitants were deported to France and then migrated to Louisiana in the Great Upheaval (see Cajuns).

I'll let you dig into the details here, but in short, the Acadians were forcibly expelled from the present day Canadian Maritime provinces of Nova Scotia, New Brunswick, and Prince Edward Island —an area also known as Acadie. This happened over 10 years (1755–1764) during the French and Indian War as part of the British military campaign against New France. The British first deported Acadians to the Thirteen Colonies (remember, this is pre-US), and after 1758 transported nearly all of the Acadians to the colonies, Britain, and France. Afterwards, many of them relocated to Louisiana, where the Cajuns trace their roots to the influx of Acadian settlers after the Great Expulsion from Nova Scotia. Since moving to Louisiana the Cajuns have developed their own dialect, Cajun French, and you can still hear the effects today.
As I was driving around part of Cape Breton I turned on the car radio to the local FM station and heard this song. My French is terrible, but I understood enough to get the gist of the song:
Which includes the lyrics:
Chorus: Acadie à la Lousiane;
Un grand voyage pour notre monde
Pour trouver la liberté
Et un beau pays
(Translation: Acadia to Louisiana, a long voyage for our people; to find liberty and a beautiful land.)

When searching for a phrase, I usually start by just quoting it, like this:

and seeing what I find. In this case, I found lots of things, but none of which were especially useful. My only strategy at this point was to shift to Google Books and start adding in additional terms that I was hoping would limit the results to what I needed. Here's what I tried:

None of these really worked well. But I kept at it, and then finally I tried:

[ "going down to the north" maritimes ]

I struck gold with that last one, finding that "...in some parts of the Western Isles of Scotland, it is not uncommon to hear islanders talking about going “down” to the north and “up” to the south."

That's relevant because Cape Breton is ALSO populated with a lot of Scots who migrated to the area during the 1800s, so they well could have brought along this standard usage.

But that's a bit tangential. Could I find something more direct? When doing repeated searches like this, I will often back off a little on the use of quotes. So my next search was:

and--lo & behold--I found several pages that discuss the Cape Breton idiom of "doing down north" with the explanation (from the Canadian site):

"Cape Bretoners talk about Down North – diametrically contrary to most people who go “down south” and “up north.”... Let’s overlook the finer points of the compass! Let’s think wind. In the age of sail, if you wanted to sail Lake Bras d’Or from Baddeck northeast to Sydney, for the majority of your journey you would make use of the prevailing wind which blows most commonly from the southwest. Thus you would be sailing “down wind” and therefore (sort of) “down north”. Logically, therefore, on your return trip you would be sailing “up” to Baddeck against the prevailing wind.."

In this way I also found the book, Down North and Up Along, which describes going "down north" as applying to any journey northward from the southernmost point of Nova Scotia.

3. I visited a few small fishing villages and noticed that they have a particular kind of fishing boat. I wondered if this was particular to Cape Breton, or if it's more broadly distributed. So... what's a typical Cape Breton fishing boat design?

I started this Challenge by searching just for:

but found that the results were overwhelmed by boats for sale, or offers for fishing charters. Clearly, I needed to be more specific. I shifted my search to:

and found lots of great results. Including this nice article at the Canadian Museum of History about Nova Scotia boat design. This tells us that Cape Breton fishing boats "...have a curved top cuddy and graceful, single shear." And that "...A distinct feature of wooden Nova Scotian boats was the hollow or built-down skeg; elsewhere builders made a solid wood deadwood. It was a lighter more buoyant hull and always a feature of "Novi" boats, as they were known throughout Maine."

An Image search also shows some distinctive Cape Breton boats. Notice the nearly vertical bow, and the deck in the back. These aren't big boats, but the design is clearly Cape Breton. 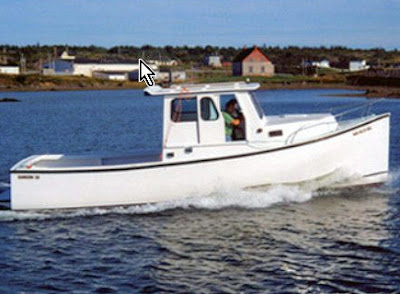 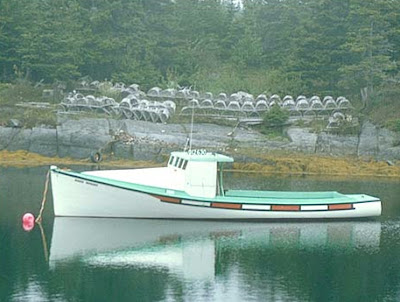 1. Pay attention to the things you see in the world. I don't know about you, but painted telephone poles are an unusual thing to see, and when you see a bunch... well, you should start asking questions. Why?

2. A great way to find a song you heard on the radio is to search for a distinctive lyric... on YouTube. I'm always impressed at how well this works. In this case, I found that song I heard, in Cajun French, on YouTube.

3. Sometimes you just have to do a bunch of searches. When looking for the "down north" explanation, I probably did 12 searches before I found one that got me somewhere. I was able to do this quickly, just doing a broad survey of available results. A key thing to remember (especially if you're a student): Sticking with it sometimes takes a little time. But it's completely worth it.

4. Try going to a less restrictive search when things aren't working out. As you saw in the above example, to really get a good result, I had to NOT use double quotes, even though I initially thought they were necessary. Remember to try backing off (removing double quotes, or removing search terms that aren't as helpful as you believe) as a strategy.

5. Contrariwise, sometimes you have to ADD in a term to exclude results that are getting in the way. That was the case when I had to add the term "design" to find information about Cape Breton fishing boats; it was the only way to actually get to results that were useful.