Answer: What are the names?

Names (for things, people, places, songs, continents, concepts) are important!
The Challenge for this week was to identify a few names that might not be what you think!
These weren't especially difficult, but they bring up a really good point: A name might not be what you think it is. It's worth doing just a bit more digging. For instance...
1. Who is Allison Guyot? Why this is a memorable name? What does Allison Guyot look like?
The query:
[ Allison Guyot ]
quickly leads us to the Wikipedia article, telling us that Allison Guyot is a tablemount (that is, a guyot) in the underwater Mid-Pacific Mountains of the Pacific Ocean. This particular guyot is west of Hawaii and northeast of the Marshall Islands. At the time of its formation, the atoll (from which this came) was located in the Southern Hemisphere and tectonically drifted to its current position.
It's a memorable name because it looks like someone's regular name; I could imagine meeting Allison Guyot and saying hi.
But in fact it's a submerged, truncated mountaintop that's named for E.C. Allison, an oceanographer and paleontologist at San Diego State College, California.
I couldn't find any good images of Allison Guyot, but I did find a generic image of a guyot on the Wikipedia page for guyot:

And, by checking Google Scholar, I was able to find many articles about Allison Guyot (especially about the tiny fossils found there). This article by Edward Winterer (et al.) included a great cross-section image of Allison Guyot as seen by sonar, way out in the deep waters of the Pacific Northwest.
Winterer, Edward L., and Christopher V. Metzler. "Origin and subsidence of guyots in Mid‐Pacific Mountains." Journal of Geophysical Research: Solid Earth 89.B12 (1984): 9969-9979.
2. Who is Franklin Dixon?
Again, not hard, but I didn't know that Franklin W. Dixon is the pen name used by a variety of different authors who wrote The Hardy Boys novels for the Edward Stratemeyer Syndicate, as well as for the Ted Scott Flying Stories series published by Grosset & Dunlap.
Charles Leslie McFarlane, a Canadian author, was the originator of the series. He wrote 19 of the first 25 books in the series.
The books sell more than a million copies each year, and several new volumes are added to the list each year. The tales have been translated into more than 25 languages.
3. Who wrote the Nancy Drew mysteries?

Aha! I did not know that the Nancy Drew books were ALSO created by publisher Edward Stratemeyer as the female counterpart to the Hardy Boys series. Mildred Wirt Benson (July 10, 1905–May 28, 2002) was the original Carolyn Keene, writing 23 of the original series, beginning #1, The Secret of the Old Clock.

Like the Hardy Boy series, the Nancy Drew books are incredibly popular (translated into 45 languages). And, under the direction of Stratemeyer, the books are ghostwritten by a number of authors and published under the collective pseudonym Carolyn Keene.

So who was Stratemeyer? How did he come to be the director of such successful series?

Do the obvious search, and I learn that Edward L. Stratemeyer (October 4, 1862 – May 10, 1930) was an American publisher and writer of children's fiction.

In addition, he was one of the most prolific writers in the world, producing more than 1,300 books himself, with sales exceeding 500 million copies.

4. What is the name of this symbol? ÷
(yes, I know it’s the division symbol… what’s the REAL name of it?)
All I did was the query:
[ ÷ ]
(Yes... you can query just single characters!)
I found that it's the symbol for division, properly named the obelus.
Using this character to represent division, though common, is not universally recommended: the ISO 80000-2 standard for mathematical notation recommends only the solidus (/) or fraction bar for division, or the colon for ratios; it says that this symbol "should not be used" for division.
5. What's the name of this other symbol? Ꮬ
I included this character because it's still a surprise to some searchers that you can search for special characters. In this case, it's a letter of the Cherokee syllabary, transcribed as syllable dla.
You could also find this character by drawing it in Google Docs (as I discussed in SRS Aug 28, 2014, which showed how to draw the symbol for recognition, as well as ShapeCatcher.com, which does the same thing).
Remmij pointed out another online charater reco app at Mausr.com. These are all great. (And if one doesn't work for you, try another... or brush up on your drawing skills.)
6. How about THIS character? ⌘
Doing a search for this character leads you into a fascinating rabbithole of discovery. Most internet denizens recognize it as Apple's command key symbol, but it's also called the looped square, and is commonly used throughout Scandinavia (and a bit beyond) on road signs to indicate places of historical or cultural interest.
But since it's ALSO used on Macintosh keyboards, the character has accreted a few other terms as well. If you're looking for this character in a computing (specifically an Apple/Mac context), you might want to know that some people also call this the Command key (⌘), the Apple key, clover key, open-Apple key, splat, pretzel, drone (rare), or propeller.
You can also find this called a Bowen knot.
One symbol, but 10 different terms.
6. What’s the difference between these two characters:
/ \
We already saw that the right-leaning slash (the first character) is called the solidus, commonly representing division. Let's not stop there--let's do the search:
[ / ]
Oddly, this doesn't do a search for the character if you do your search from the ADDRESS bar on the Chrome and Firefox browsers it shows a listing of your computer's file system. If you do this on Safari, it shows you what you'd expect.
IF, on the other hand, you do your Google query from the good old query box, you'll get what you expect--the results. Take note: The address bar in your browser might give very different results! (This doesn't happen often, but a few things like this crop up from time to time.)

From this search we see that this character is called a slash (the most common name), but also known as a stroke, virgule, diagonal, right-leaning stroke, oblique dash, solidus, slant, separatrix, forward slash. I also learned that there are three different kinds of the slash character, each specialized for different typesetting needs. 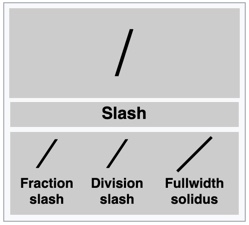 Fascinating.
But what about the left-leaning slash (the second character)?
Doing the same search (although with the \ character) tells us that it is sometimes called a hack, whack, escape (from C/UNIX), reverse slash, slosh, downwhack, backslant, backwhack, bash, reverse slant, and reversed virgule.. and sometimes even a reversed solidus.

1. Careful with certain special queries! As we see, the query [ / ] produces unexpected results IF you do it in the address bar. Another one to be careful about is "chrome"... which has all kinds of alternative completions. So... if you see something odd / interesting, try it in the other search box.
2. Check the meaning (and names) of things you think you already know. We've talked about this before, but making sure you know what something is (or what it means) AND learning other ways of describing that thing--that's a valuable habit to pick up.
I hope you enjoyed this fun/easy SearchResearch Challenge.
AND.. a special announcement: I started up a new YouTube channel. You might find Search Education to be an interesting thing to subscribe to...
Link to the Search Education YouTube channel
I've pushed a few short videos there (as advertised a couple of posts ago). If you subscribe, you'll be the first to see the videos!
Search on!