Dan Russell • July 27, 2015
SearchReSearch
Republished with permission from SearchReSearch
Answer: Time zone eccentricities Dan Russell
Once again, the reality is more complex...
... than I thought. If you're like me, you thought that there might be as many as 24 time zones. You probably knew that China was all one giant time zone, and that Newfoundland (Canada) was a bit odd.

But as we know, ofttimes when you start to look into something, things get more complex than you'd imagine.
Let's look at our questions one at a time.

1. What time is it in Newfoundland (Canada)? And why is it different than the time in Prince Edward island (which is due south of Newfoundland)?

It's pretty straightforward to find out what time it is in Newfoundland--the query:

and learn that the time in Newfoundland is GMT-2:30.

Yes, it's NOT an integer number of hours different than GMT. (Unlike, say, the Pacific Daylight Time Zone, where I live, which is GMT - 7 hours; or the Atlantic Standard Time Zone (which PEI follows; defined as GMT - 3).

The NTZ entry on Wikipedia tells us that "This time zone exists because of the location of the island and the fact that it was a separate dominion when the time zones were established. The island of Newfoundland lies squarely in the eastern half of the Atlantic Time Zone, exactly three and a half hours from Greenwich. Since it was separate from Canada, it had the right to adopt its own time zone. While the entire province lies west of the standard meridian for a half-hour time zone, 52.5 degrees west longitude, this is also the near exact meridian of St. John's, the province's capital and largest city. In 1963, the Newfoundland government attempted to bring the province into conformity with the other Atlantic provinces, but withdrew in the face of stiff public opposition."

Ok then. It fits better with the local time, and the locals like it. (Which also, by the way, gives the Newfoundland TV station the ability to run "Television World Premiere" as a bumper when it shows some new TV show...)

2. Can you create your own time zone map by finding data that gives the actual boundary lines for each zone? (If you do make your own map, please share the URL for your creation! We'd all love to see it.)

There are many ways to do this. I really like the map that CartographerWithoutBorders author Brandon Rishel made. (He has a great blog--highly recommended if you're into maps.)

I ran across this map before I wrote this Challenge and liked it so much that it led me to re-cast his map as the Challenge. (H/T to Brandon!)

When I asked him, Brandon kindly replied that he got the data from www.naturalearthdata.com and created it from that. (In particular: ne_10m_time_zones.shp, from the 1:10m cultural vectors.) He also said that NaturalEarth is an amazing collection of map data--he's right.

But that motivated me to look around a bit for other time zone data. Since I know that Google Earth and Google Maps accept KML (as well as KMZ or SHP files), I did a search for:

Once you do that search, you'll find there area a TON of data sets. So I downloaded a bunch (trying to look for ones with fairly recent dates), and ended up just importing them into Google Earth Pro to plot them on the globe.

While there are many, I especially liked the tz_world_mp shapefile (which was labeled as having ALL of the timezones worldwide, from 2013. The data source page also says that "The geometries are primarily derived from the fip10s data (itself derived from the VMAP0 data, provided by the US National Imagery and Mapping Agency--aka NIMA), and then augmented with data presented in the pages for the maps of the United States, Canada, Russia and China.

Once I downloaded the data file and unzipped them, I had a 33.9Mb tz_world_mp.shp file. (That is, the "Time zones world multipolygon" shape file.)

All I had to do was to Import into Google Earth Pro and I found I had this... 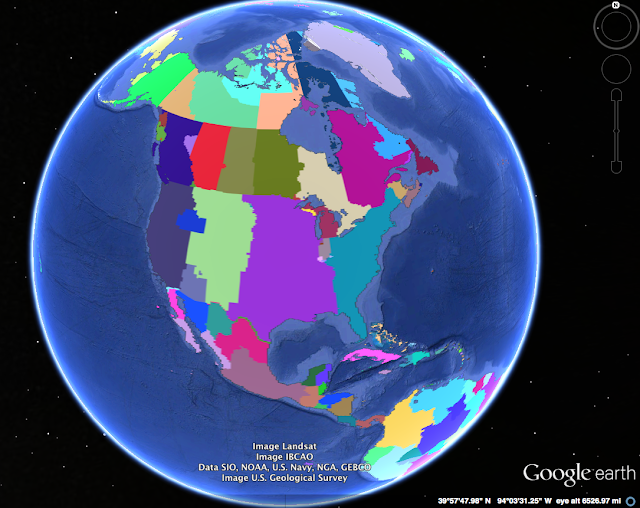 What's up with this? Why isn't it more like Brandon's map, or more like the traditional time zone maps I'd always seen? For instance:


What Brandon did in his map (and what most traditional timezone maps do) is to merge time zones that follow the same time procedures. When you merge equivalent time zones together, you get something more like the ordinary map.

But there's still something interesting here when you look more closely.

Here's a chunk of southern US and northern Mexico. 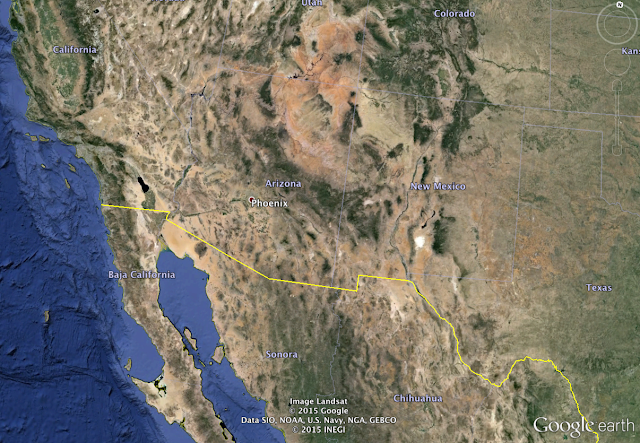 Now, here's that same area with the timezone polygons layered on top of it: 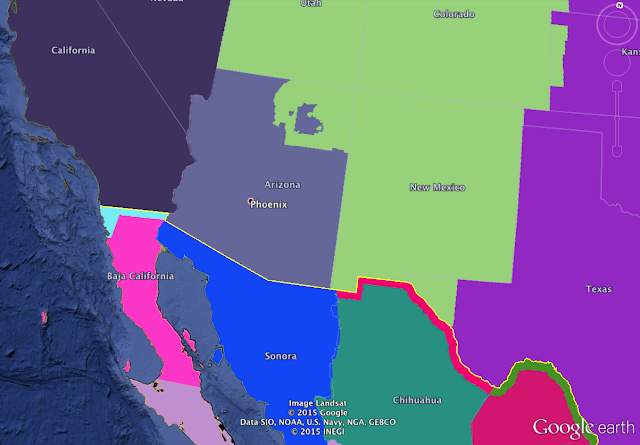 What ARE all of these colors?

To find out, I zoomed in on Arizona and clicked on the middle of the slate-blue area near Phoenix. 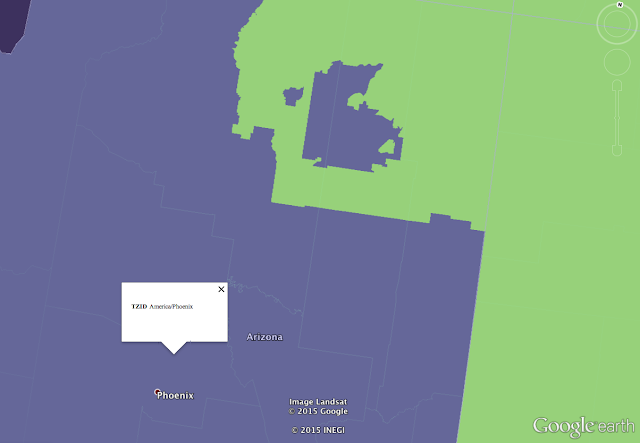 That popup appeared when I clicked on it. Okay... NOW what's "TZID America/Phoenix"?

A quick search for that teaches me that "TZID America/Phoenix" is the "Time Zone Identifier" for that region. TZIDs are defined as the authority for time definitions by region. The database, as well as some reference source code, is in the public domain, with new editions of the database and code being published as needed (usually a few times each year). The files are stored (and available at the IANA FTP server (Or you can see the complete list of timezone codes at Wikipedia. Caution: This is a fairly large web page.)

If you look up these definitions (e.g., "TZID America/Phoenix" you'll find that it's the same as "Mountain Time" (but without following Daylight Savings time). Here's the entry in the table:

But here's the entry for TZID America/Shiprock (which is the same as America/Denver):

Shiprock is the central city in the Navajo Nation in northern Arizona and it's colored green above. Which answers our next question...

3. Once you've made that map, what's the strangest time zone anomaly you can find?

Check out this map (I did a search for [ Navajo Nation ] on Google Maps, which highlighted the boundaries of the Navajo Nation in light pink.) 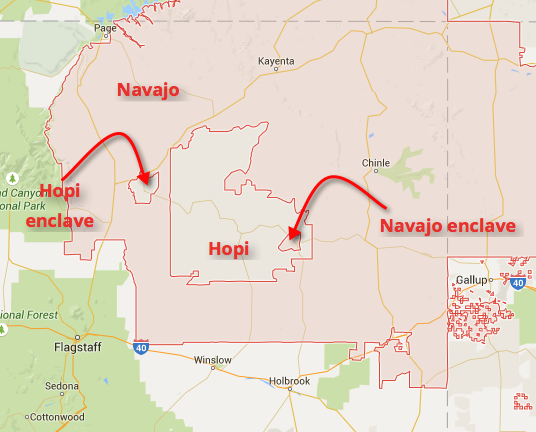 But within the Navajo reservation is the Hopi reservation, and within that there's a Navajo enclave... and likewise, there's a second Hopi enclave!

Since Denver follows Daylight Saving time (they go back one hour in the fall) and Phoenix does NOT, this means that a straight-line 100 mile walk, it's possible to shift time zones 7 times.

We won't even start to talk about that complicated area near Gallup, NM. But you can lookup why TZID America/Ojinaga (that heavy pink line running at the bottom of New Mexico and Texas) has its own Time Zone.

For a truly brilliant explanation about Daylight Saving Time, TimeZones, and about the Navajo/Hopi time zone eccentricity, I highly recommend CPG Grey's video on the topic. (H/T to Simon Tong for the link!) His Arizona eccentricity starts at 5:01 into the video, but the entire video is worth watching.

There's always something to learn here...

1. The data is out there... As we found, there are many, many versions of the TimeZone data. Keep searching if you're not happy with what you've found. The truth, as they say, is out there. (And a big thanks to Brandon Rishel for pointing out the Natural Earth data site.)

2. For lots of easy geographic applications, Google Earth is your friend. Note that the Google Earth Pro version is now FREE! (Hurrah! It used to be expensive.) This allows you to import all kinds of files and then slice/dice them for layering and analysis.

3. As always, there's usually more to the story than you expect. I could have written a book about all the things I learned about Time Zones. What at first seems like a simple concept turns out to be really rich and interesting. (Which is why it took me so long to write this solution up this week. Waaay too many interesting things to read.)