Answer: The story behind these bodies of water… (Part 1)

Dan Russell • October 6, 2017
SearchReSearch
Republished with permission from SearchReSearch
Answer: The story behind these bodies of water… (Part 1) Dan Russell
Water sometimes hides many details.
... and sometimes it hides a story as well. As you remember from the SRS Challenge of 2 weeks ago: Why are each of these locations very interesting?

1. What's going on with all of these blue lines in the image below? You can find this oddly arranged water/earth combination at Google Maps link. There are several stories to discover here, but first--What is this? Why the strange water shapes?

This one's not hard: Just open Google Maps and zoom out a bit and switch to Satellite view: 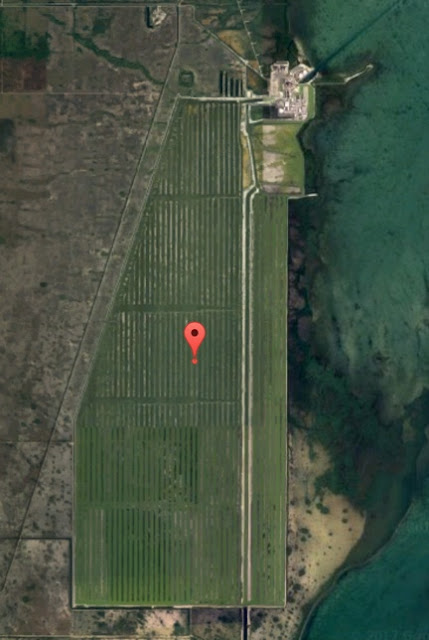 You'll see an obvious structure at the northeast corner of the long stripes of water. If you zoom in a bit on that, you'll get the answer quickly. It's the Turkey Point Nuclear Power Plant. 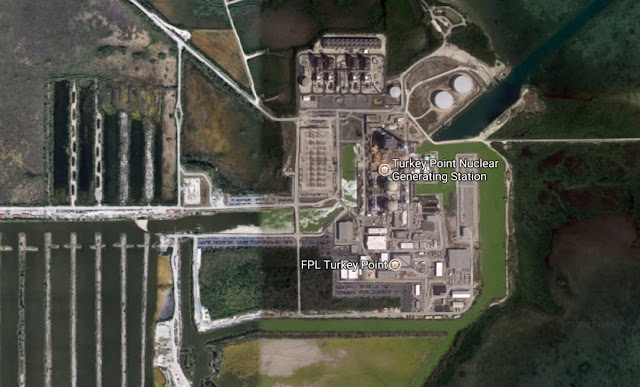 Then, when you do the obvious search on Google, you'll see a few likely query completions as you enter your query. PAY ATTENTION to these as you type--they're often great clues as to what you're searching. In this case, we see that they're probably canals.

If you go to the Wikipedia article, you'll see that they're "cooling canals," that is, where the hot water goes after it's been through the reactor. This makes sense: they need some way to cool all of that hot water coming out of the heat exchangers. The hot water wends its way through the canals to cool enough so it can be discharged into the ocean nearby.

2. Just below is picture of another oddly shaped and oddly colored bodies of water. Why are these giant oval things such different colors? Maps link. 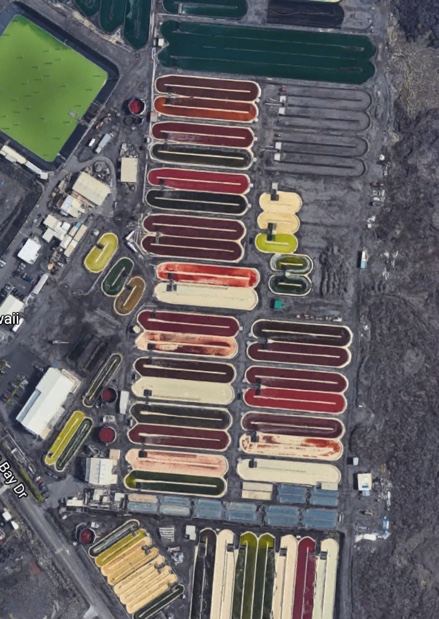 I have to admit that this was a bit harder than I thought it would be. The simple and obvious SRS method is to just look this up in Google Maps. When you do, you get this maps image: 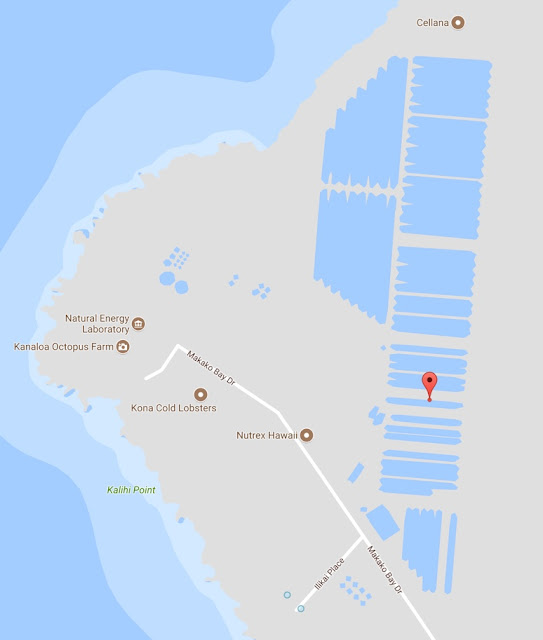 But it's a little hard to tell--are these long, oval ponds part of Nutrex or Cellana?
I thought I'd check by searching for information about each company (the both produce algae as food and health supplements)--but most of the web content about both companies is marketing information. That's fine, but how do I tell which ponds belong to which company?
Zooming in helps. If you zoom in on the Cellana facility, you'll see this: 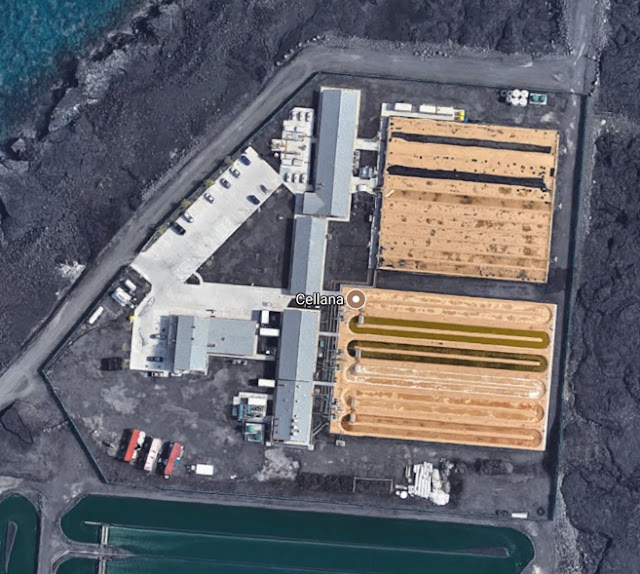 Notice that fence that surrounds the Cellana site? (It's that dark line that goes all the way around.) They have a nice 5-sided fence that encloses a bunch of nice light-brown production ponds.
Interestingly, the home page for Cellana has a great photo of their production ponds.
If you go to Google Maps and use the 3D controls, you can almost exactly match the point-of-view for this photo.
But that's not where the arrow is located: it's a bit farther south.
By contrast, if you zoom in on the Nutrex facility, you'll see that the gate is clearly the entrance to this entire (and much larger) facility. 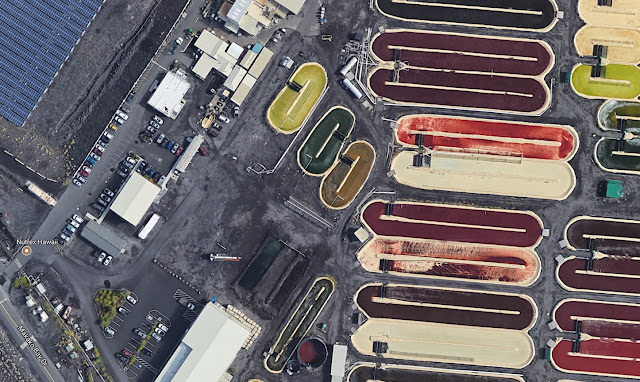 Still, is it possible that Nutrex does something else? I wanted a bit more confirmation that Nutrex (the company) actually operated the big oval ponds.
After a number of attempts to find images of the Nutrex production facilities, I FINALLY thought about searching for a video that visited the facility. My query was:
[ Nutrex production facility ]
and I found a lovely video on Youtube with an interview at the Nutrex facility. In this video, a health columnist visits the place where spirulina (a particular kind of dietary supplement) is grown by Nutrex. The video has two great frames. Here's one frame showing an overview of the location: 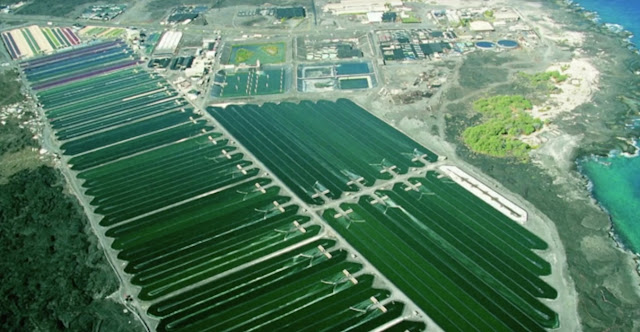 And there's also this view of the large, white stirring paddles used at the end of each pond to keep the contents in motion. 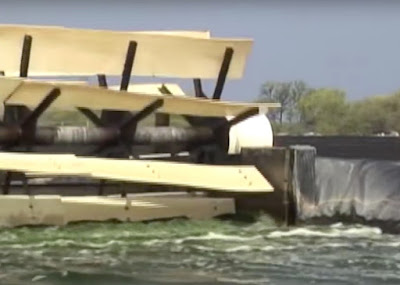 If you look carefully at the previous image, you'll actually see the large white paddles extending across the ponds. This lines up with the previous image labeled as Nutrex by Google Maps.
I'd say these ponds are owned and operated by Nutrex.
Why the different colors? It all depends on what's growing in each of the oval ponds. Nutrex has two major products: Spirulina and astaxanthin. Spirulina is a cyanobacteria that's rich green, and since it's their majority product, it takes up most of the space in the ponds (see all that green?). Astaxanthin is a keto-carotenoid that acts as an antioxidant, and comes from microalgae. It's dark red in color, hence the shades of red. As the company website points out, some of the ponds at Nutrex with astaxanthin are a deep red.

3. While we're in the odd-shapes-and-colors mode, what's going on here? Why is the water so... red in some places and green in others? What causes the color changes? (Like the radio tower Challenge from last week, this is something I see nearly every time I fly into San Francisco. Big hint: This body of water is never the same color twice...) 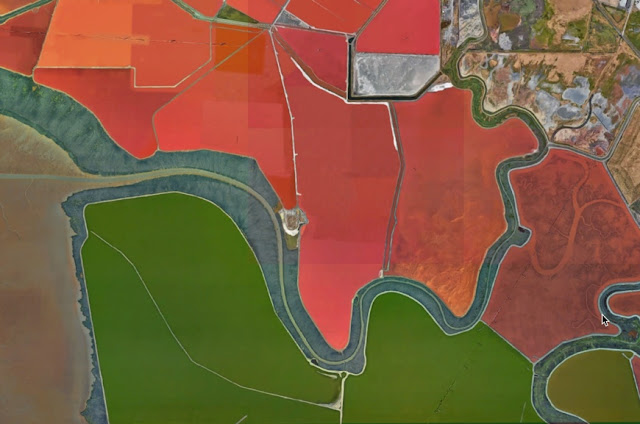 From the text of the Challenge, it's clear that this is an area on the flight path into SFO. I know where the flight path is, but if you don't, a quick Google Image query will show you dozens of flight paths into the airport: 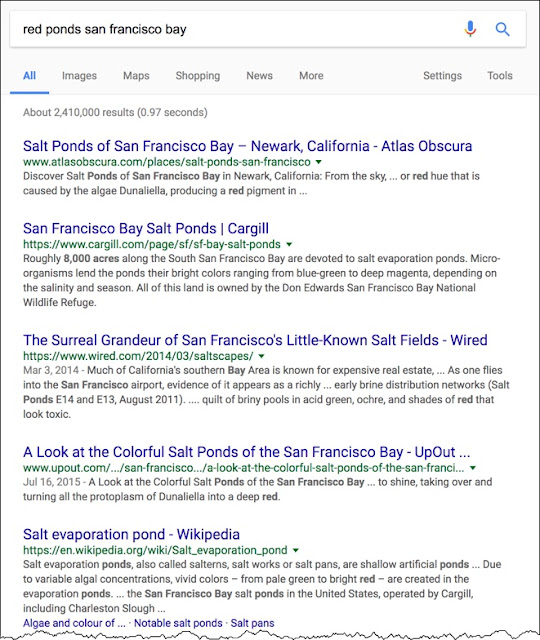 All of these tell us the same thing: The large red and green-colored ponds in the Bay are salt ponds operated by the Cargill Company.
The red and green ponds are caused by the organisms or algae living within them, not unlike the Hawaiian ponds. The microorganisms in each pond are determined by their tolerance to salinity, and the colors are reactions to the salinity level. Sea water is let into the ponds, and then they dehydrate over time, leaving sea salt, most of which is then used for chemical purposes (and not human consumption).
The evaporation ponds vary from bright green (where low salinity encourages green algae, not unlike spirulina), to a deep coral pink or red hue that is caused by the algae Dunaliella at high salinity levels. A large number of brine shrimp give an orange color to mid-salinity ponds.
Since 1854, salt has been one of San Francisco Bay's largest industries, with over 80% of its wetlands developed for salt mining. At one point, salt ponds covered over 16,500 acres, most of which was owned by Cargill, Inc.
So now you know. When you land at San Francisco and you see bright colors on the salt flats below, you're actually seeing billions upon billions of tiny animals...
--------------------
We're not done with this Challenge: there are two more to go, but I want to get something out before this week ends, so I'm going to post this as Part 1, with a promise to give you the answer (and the Search Lessons) on Monday of next week as Part 2.

(Why so busy, Dan? Answer: I flew back from the South Pacific on Saturday, then went immediately to teach a week-long class on Pragmatics of Ethnography at UC San Diego. While it's a huge amount of fun to do, it also takes a lot of time. Today (Friday, October 6) is the day when all of the research teams report their results... so it's a busy kind of day for me. I'll be back at work on Monday, which means I'll have more time to write.)

Until then, bula! (And kudos to everyone who searched out what bula means...)