Answer: The story behind a beautiful white flower?

Dan Russell • November 9, 2015
SearchReSearch
Republished with permission from SearchReSearch
Answer: The story behind a beautiful white flower? Dan Russell
This was simpler than I thought...
Although I'm intrigued by flowers and such, I didn't think that searching out the answer would be as simple as it was! Seems to me that when I looked it up (a few years ago, admittedly), this was a much more difficult search. Sheesh. Kids these days have it SO easy!

More seriously, I do get the distinct sense that many search Challenges ARE easier--which means that both the amount of good online content is growing and that the search systems are becoming better. Hurrah!

To recap the Challenge: I found this flower in Southern California last July near the Santa Monica mountains. It's a large and beautiful flower, maybe 4 inches across, and quite striking. 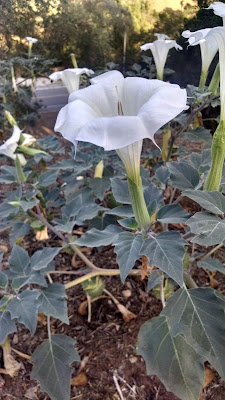 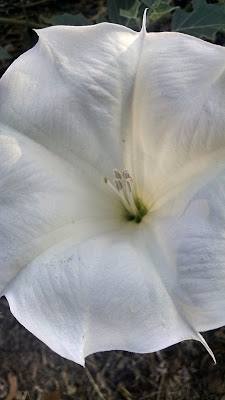 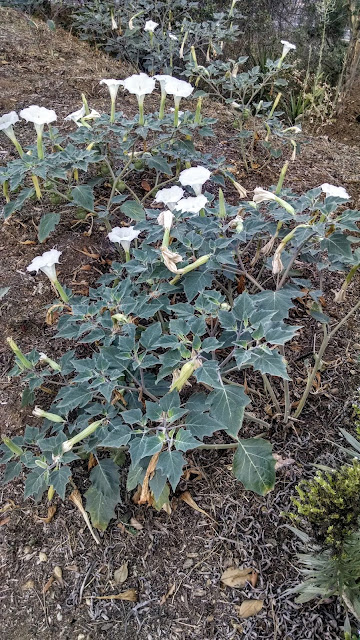 Here are the Challenges:

1. What's the name of this plant? (Both common and Latin names.)

I was surprised when Ramón reported that regular Google Search-By-Image would work! Since I'd taken the photo, I really didn't expect it to match with anything out there. But if you do that search with the second image (with the filename "D2-ultra-closeup"), you'll get this: 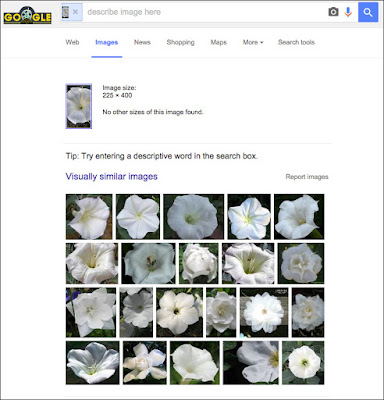 Clicking on the first image (upper left corner) takes you to a page about some of the flowers of New Mexico, where you learn that this is the flower of the Datura. (And, incidentally, the state flower of New Mexico! I didn't know that.)

A quick follow-up search on [ Datura ] and you'll find that it's a kind of nightshade. In particular, Datura is a genus that contains nine species of poisonous flowering plants, all belonging to the family Solanaceae. (And Solanaceae has lots of plants that are potentially poisonous, but valuable--such as potatoes, eggplants, and some chilis.)

There are many kinds of Datura, but the one that looks like this and grows in southern California is the Datura wrightii, which is also known as Jimson weed because of its resemblance to Datura stramonium. Just so you'll know, all parts of Datura plants contain dangerous levels of anticholinergic tropane alkaloids and may be fatal if eaten by humans, livestock, or pets. In some places, it is prohibited to buy, sell or cultivate Datura plants. That regulation, of course, doesn't work well when it's a native plant that self-seeds fairly easily. I've Datura everywhere from San Diego up through San José (near where I live in Northern California).

The Georgia O'Keefe reference was to her famous work, "Jimson Weed" which shows four flowers of the Datura. But it's also worth looking at her picture of the flower by itself: 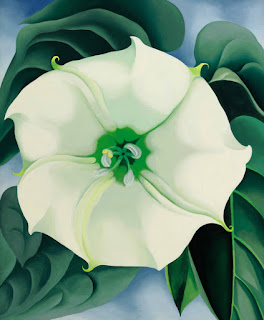 2. Is there a possible connection between this plant and zombies? (I know, we should have had this question last week, just before Halloween...)

Now that we know it's a Datura plant, we can do a simple search (which is remarkably like Ramón's search:

which gives us a link to an article in the Pharmaceutical Journal with the title: "Beware the psychedelic effects of the zombie cucumber" in which we discover this sentence: "But it has many other names, including locoweed, mad apple, hell’s bells, devil’s trumpet, mad hatter, devil’s snare, crazy tea and zombie cucumber — names that give an indication of its psychedelic effects."

That article also includes a wonderful story from the early days of Jamestown:

Although the plant was already known as James-town-weed at the time, the origin of the name is often attributed to an incident in the Jamestown area in 1676, when soldiers were sent to stop an armed rebellion against the rule of the colony’s governor. Needing to eat, the soldiers made a salad from local plants. The hallucinogenic properties of Datura stramonium soon took effect.

(link to this story in Google Books)

In ‘The history and present state of Virginia’ (1705), Robert Beverly wrote: “The plant was gather’d for a boil’d salad by some of the soldiers and some of them ate plentifully of it, the effect of which was a very pleasant comedy, for they turned natural fools upon it for several days: one would blow up a feather in the air; another would dart straws at it with much fury; and another, stark naked, was sitting up in a corner like a monkey, grinning and making mows [grimaces] at them; a fourth would fondly kiss and paw his companions, and sneer in their faces with a countenance more antic than any in a Dutch droll.

In this frantic condition they were confined, lest they should, in their folly, destroy themselves — though it was observed that all their actions were full of innocence and good nature. Indeed they were not very cleanly; for they would have wallowed in their own excrements, if they had not been prevented. A thousand such simple tricks they played, and after 11 days returned themselves again, not remembering anything that had passed.

Lesson learned: Don't eat this stuff, unless you want to end up like these guys.

But I digress. We're looking for a zombie connection to Datura... 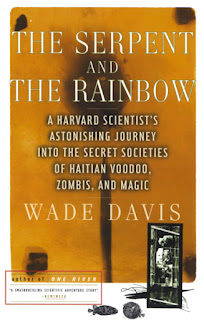 Farther down on the SERP, we find a link to an article about The ethnobiology of voodoo zombification, from Science Blogs. This article tells us that "This second powder is thought to contain atropine and scopolamine, toxic and dissociative hallucinogenic compounds derived from the plants Datura stramonium and Datura metel (both of which are known in Haiti as the “zombie cucumber”)."

What's more, that article points us to the book by Wade Davis, The Serpent and the Rainbow, which is all about the rituals surrounding zombification in the vodoun (voodoo) traditions of Haiti. While Davis is sometimes controversial, his book makes a strong case that ethnobotany uses some extremely potent natural substances--including Datura and intoxicating people to the point of seeming to be dead. Their revivification (from near-death) is what led to the western story of zombies as the undead who walk on earth. It's a fascinating story, in which Datura plays a key role. Also see his book Passage of Darkness: The Ethnobiology of the Haitian Zombie.


3. Why do people think this plant might suggest that travelers from the Americas could have visited Europe well before Columbus?

For this Challenge I did this search:

although I found later that [ Datura before Columbus ] also works pretty well.

Of course, if I were a young SearchResearcher, I'd have to pick up this "context term" (I've written about "context terms" before) from reading articles that talk about these ideas. And how would you find these? Start with a search for articles that describe discoveries before Columbus, e.g., [ discoveries before Columbus ] and look for the particular words that will act as context terms you can use.

In my search I found an interesting article published in the Journal of Bioscience (J Biosci. 2007 Dec;32(7):1227-44.), with the title of "Historical evidence for a pre-Columbian presence of Datura in the Old World and implications for a first millennium transfer from the New World." The article points out that "Datura (Solanaceae)is a small genus of plants that,for long, was thought to occur naturally in both the New and Old Worlds. However, recent studies indicate that all species in the genus originated in the Americas."

HOWEVER... they go on to write:

"We draw on old Arabic and Indic texts and southern Indian iconographic representations to show that there is conclusive evidence for the pre-Columbian presence of at least one species of Datura in the Old World. Given the systematic evidence for a New World origin of the genus, the most plausible explanation for this presence is a relatively recent but pre-Columbian (probably first millennium CE) transfer of at least one Datura species, D. metel, into the Old World. Because D. metel is a domesticated species with a disjunct distribution,this might represent an instance of human-mediated transport from the New World to the Old World..."

Which is complicated way of saying someone had to bring Datura from the New World to the Old World before Columbus...

As several readers found (thanks, Ramón and Remmij), art historian David Bellingham has recently argued that Botticelli’s “Venus and Mars” depicts the gods in the throes of Datura induced delirium.

Might it be that this is more evidence of pre-Columbian transfer of Datura?

That strange fruit the satyr is holding--could it be the Datura stramonium fruit? If so, then Mars might well be in a Datura-induced swoon (or trip, depending on how you talk about such things).

I don't know if that's a Datura fruit or not--but it's suspicious. And it's definitely one reason that some historians think there could have been a pre-Columbian connection between North America and Europe.

1. Search by Image works more often than you'd think. I was really surprised that it worked with my image--but in looking at the search hits, I realized that it worked because people (including me) often make photos in standard poses. (Note how much my second photo above looks like the O'Keeffe picture of Datura.) 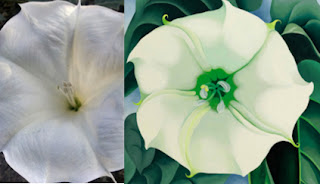 This leads me to a pro search tip: If you're doing a Search-by-image, and you're taking the photo--consider taking the most obvious / stereotype photo you can. You're searching for other photos that people have taken (or drawings they've made) that are already out there. This is one case where you want to consciously think like everyone else...

3. Using context terms (e.g., "pre-Columbian" above) will help narrow down your search results. And, as shown above, if you don't know enough to know the context terms appropriate to your search situation, then doing a bit of quick reading can help you find those terms, which you can then use in your search.

4. Google Books: Incredibly useful for background information. From the Jamestown story to the "Serpent" book, Books-as-searchable-documents are really valuable. Whenever you find yourself searching hard--consider a trip to Books.


And the award this week for the most surprising result HAS to go to Remmij for finding the StreetView location of the Datura that I photographed while on my run. (See below.) Even I didn't think of that! This is, in fact, the very same plant that's photographed above! This Streetview photo was taken in March, 2015, while MY photo was taken just a few months later in July, 2015. Excellent find!