Answer: The Mystery of the Salzburg Stream–does it flow uphill?

Dan Russell • August 2, 2018
SearchReSearch
Republished with permission from SearchReSearch
Answer: The Mystery of the Salzburg Stream–does it flow uphill? Dan Russell
Water flowing uphill?
It was a huge surprise to me to see the stream apparently running uphill. What's up with that? How would that be possible?

To remind us of the Challenge, here's a recap.
Here's the place I was walking (from Google Maps, in 3D mode). In reality, it's clear that the left part of the picture is uphill from the right part. 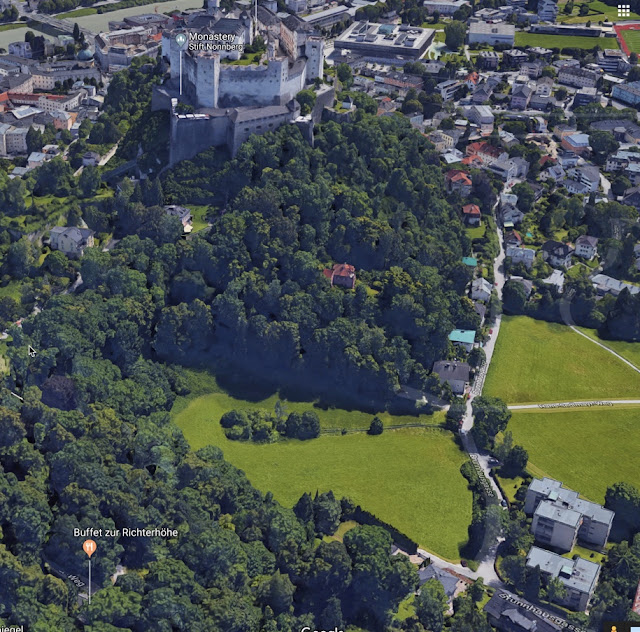 Just below the fortress is a patch of forest, and below that is a meadow. In the middle of the meadow is a stream that ends in a clump of trees and brush.
Here's the map of that place. See the blue line of the stream? That's the stream flowing into the side of the hill. 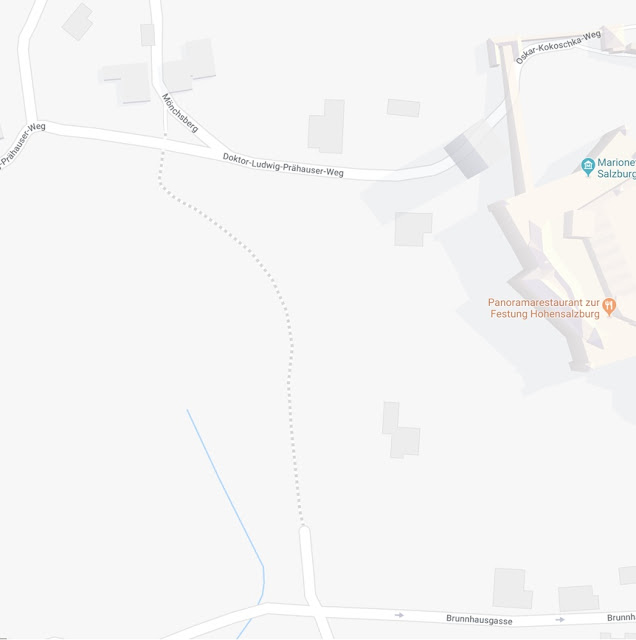 Here's the same scene in the satellite view. It sure looks like the source of a spring, with water flowing from south-to-north, into the side of the hill. 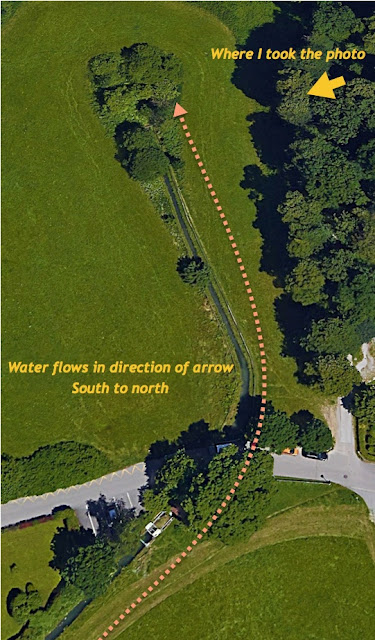 How is it that this stream in Salzburg is apparently flowing uphill? What's the real story behind this gentling flowing brook? How is this possible?

When I realized that the water was flowing INTO the mountain (rather than out of the mountain) I was plenty puzzled. I tried to walk into the bushes to see what was going on, but that's a big thicket (with lots of spiny, pointy plants, which I assume were not planted there by accident).

So I had to turn to my trusty search engine to figure this one out. All I knew at this point was that there was an interesting physical phenomenon that needed explaining. But how to start?

I already knew that there were places where water apparently flows upstream. (I know knew that these places are tricks of the place, where an obscured horizon creates an illusion called a gravity hill, as noted by Jeffrey Dowdy in the comments.) This wasn't one of those places--this water really was running into the hillside.

The first thing I did was to check Google Maps. Here's what I first saw when I looked at the area. The yellow arrow marks the place where I took the photo. 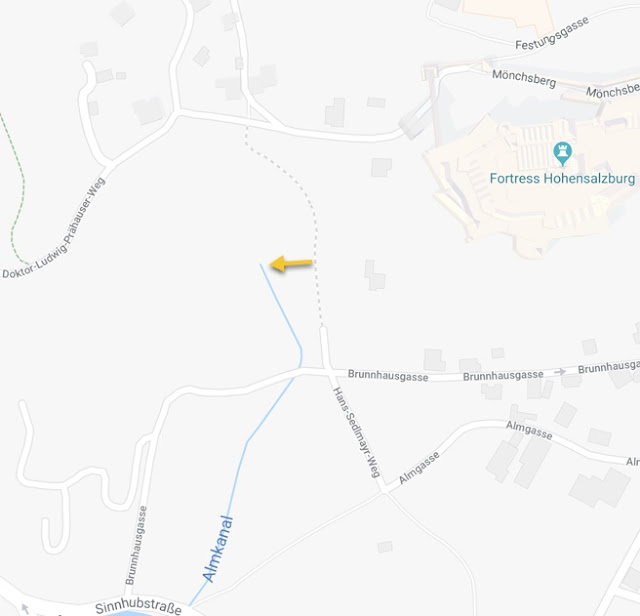 On this map, the blue line represents the stream... and by zooming out a bit I found the name "Almkanal" on the stream. (In the maps above, I had zoomed in a bit too much, and didn't see the label on the stream.)

Now I did the query for:

which quickly leads us to several articles--Almkanal and the Big Cleanup and Almkanal,(both from Salzburg.Info, the city's official website), along with Almkanal (from SN.at, the Salzburger Nachrichten, the local news site) and Almkanal of Salzburg (from Atlas Obscura)

From these sites we learn that the Almkanal is a water channel (the oldest subterranean aqueduct) that flows from the Königsseeche (a large river that in the Alps) and then straight through a tunnel in the Mönchsberg (a ridge of stone running east-west on the southern edge of the town), "reaching the old town between the cemetery of St. Peter and the fortified lane..."

The aqueduct was built by an engineer named Albert, who cut a channel through the Mönchsberg in order to access the large amount of water just south of the town. The channel was completed in 1142. It's 370 meters-long, and as much as 1.2 m wide and 2.2 m.

In other words, this is the original water supply for the old city of Salzburg! It really is an aqueduct that flows into a channel that was dug into the hillside. More amazingly, it's still in use, and is open to the public (tickets required) for a few weeks each September.

Enter the St. Peter's cemetery from Kapitelplatz square and you will see a water mill that is powered by the Almkanal. The mill is part of the bakery of the monastery, by far the oldest bakery of Salzburg.


It's been around for quite some time, so it's not a surprise that there are multiple maps of the project. Here's one from 1700:

And another from 1790--this one shows (at the bottom right) a kind of cross-section of the kanal. You can see that the canal slopes downward, very gently, from the channel that runs all the way to the Königsseeche. Like all canals, it only flows one way: downhill. This was a rather clever bit of engineering!


That entrance into the Mönchsberg was pretty covered up when I found it. Luckily, it wasn't hard to find a better picture taken in winter, when much of the obscuring vegetation has fallen.


Another way to find the answer:

In some sense, I got lucky that the stream was shown on the Google Map AND that it was such an unusual name. What would I have done if that hadn't worked out?

I guess I would have gone with the next obvious query:

gets you to the Atlas Obscura article on the Almkanal.

While looking through the SERP brought up by this search, I also found a lovely YouTube video showing the entrance that I photographer (look at 0:53 in the video below), as well as lots of footage of people crawling through the tunnels. Remarkable.

Yes, the channel is open for a few weeks each year while they clean it out. (I bet you can figure out how to get tickets if you're in Salzburg in September.) And... it's still used to grind flour!

(1) Checking the Map--at multiple levels of zoom--is a great idea. Often you can pick up terms and place names that are useful in your searching. It certainly paid off here.

(2) As both Jeffry and Jon point out in the comments thread, your "initial theory" can often steer you into blind alleyways. Be careful of things you think you know! Background knowledge is incredibly useful, but if your search isn't working out, a really important skill to have is to recognize when that's NOT working, and then step back and think about how else you'd approach the problem. In this case, it's tempting to explore ideas about karst geography (that also features disappearing rivers), but the geology of the Mönchsberg isn't karstic, it's conglomerate, which means you have to look for another explanation.