Answer: The intriguing way a lake can be dangerous

Dan Russell • June 27, 2016
SearchReSearch
Republished with permission from SearchReSearch
Answer: The intriguing way a lake can be dangerous Dan Russell
This turned out to be simpler than I expected...
The Challenge this week was to find a lake somewhere in the world that had turned deadly. How deadly? And how was it deadly?

We were looking for a non-poisonous, non-boiling lake... That is, NOT like this one in Yellowstone National Park.

That's not what we're searching for this week. Instead, we want to find...

1. Can you find a lake somewhere in the world that caused the death of nearly 2000 people? How could such a thing happen? (Hint: This happened within the past 100 years, so it's relatively recently.)
2. Was a large wave of water associated with this bizarre lake event? If so, how high did the wave go, and what kind of damage did it cause? (If any.)
3. Given this kind of watery disaster, how high would the water go up into the sky from the event?
I thought this would be a bit more of a Challenge than it was. The talented team of SearchResearchers simply took the clues I gave, and did a search for:

Everyone discovered that Lake Nyos, in Cameroon, suddenly released a huge quantity of carbon dioxide on August 21, 1986, killing nearly 2000 people who lived nearby by asphyxiation when the bubble of CO2 flowed over their villages. Tragically, this happened at night, when many people were sleeping, and killed everyone and everything within a roughly 15 mile (24 km) radius. (Article in Slate. Article in the NYTimes.)


Lake Nyos (Google Maps link) is roughly circular maar in the Oku Volcanic Field. A maar is a crater formed when a lava flow interacts violently with groundwater, blowing a giant hole in the ground. The lake is thought to have formed in about 400 years ago and is pretty deep, (682 feet; 208 meters) sitting on a porous layer of rubble, full of leftovers from earlier volcanic eruptions. Carbon dioxide seeps up into the water from below transporting the gas upward and into the deep lake-bottom water. There, under pressure from the water above, the CO2 accumulates, with water pressure preventing the gas from bubbling up. Instead, it just dissolves into the water. In essence, this unusual configuration is creating very pressurized soda water.

If the lake were in a different place, seasonal temperature swings would mix the waters, preventing carbon dioxide buildup. Cold weather causes surface waters to become dense and sink, displacing lower layers upward; in spring, the process reverses. But for equatorial lakes such as Nyos and nearby Lake Monoun, these deep layers seldom mix with top layers. These waters might be unmixed for hundreds of years.

But on that night in 1986, something happened to suddenly cause the waters to mix, bringing the carbonated water from the bottom to the top. One theory is that boulders crashing into the lake set it off. (There were signs of a recent rockslide nearby.) Or it could have been a wind-generated wave that hit the surface just wrong, causing a mixing of the layers. As the bottom layers of water saturated with carbon dioxide started coming to the top, dissolved carbon dioxide bubbled out of solution, and the bubbles drew larger and larger until the lake exploded like a huge shaken seltzer bottle. This explosion also brought up iron-rich water, which oxidized at the surface and turned the lake red.

In the process of reading about this, I realized that the USGS (United States Geological Service) probably had a report or two on this, so I did a search for:

which shows a number of great results. 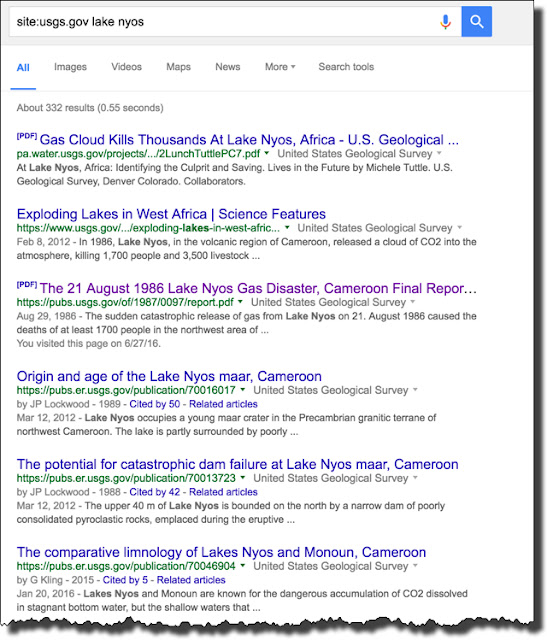 This leads to several very technical reports on the lake's CO2 eruption. There's a USGS final report with as much detail about the eruption as a geologist might want to read. (If you're interested in this, I highly recommend this.)

After reading about this event for a bit, I learned that the technical term for this kind of sudden bubbling up of CO2 from a lake is termed a "limnic eruption" A quick search for this specialized term teaches us a good deal:

What about that wave?

This search takes us to several more research reports, including ones that tell us about the wave. The Washington Post reported it as being 82 feet, but a report from the USGS claims that the resulting wave "washed over a promontory that is 80-meters in height..."

Here are the images that accompany that report: 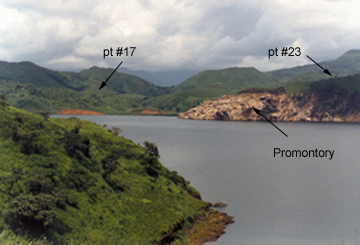 If that barren promontory is the same one that was denuded by the post-limnic eruption wave, then it very likely was an 80 meter wave. (It's difficult to actually know without a better image or a topographic map to tell us the exact elevation, but if those are trees in the foreground, it very well could be 80 meters.)

And how high did the eruption blow water into the sky?

To solve this Challenge, I turned to Google Scholar (as a place to find peer-reviewed scientific papers) for a few reports written on the Lake Nyos eruption using the query:

... and quickly found this paper by Zhang (U. Michigan department of geology). In this paper he creates a mathematical model of what happened in August of 1986. And although he doesn't have a picture of the event on that fatal day, his reasoning is pretty compelling, and leads to this diagram:


... showing that the limnic eruption caused a shower of lake water roughly 300 meters into the air. (Note also that he's indicated a promontory height of 80 meters.) The water would have shot up from the surface at a top speed of around 199 mph (320 kph), which is incredibly violent.

So what's going on with Lake Nyos today? It's still dangerously full of high-pressure CO2, but there has been an effort to depressurize the lower levels of the lake by dropping a 200 meter tube from the surface to the lower part of the lake. As you might expect, when you make a connection between the surface and the pressurized bottom of the lake, you get a fountain, which they hope is removing the pressurized CO2 fast enough to prevent a similar disaster from happening in the future...

But of course, where there's one maar waiting to turn over, there might be others. Nearby, Lake Kivu could be another such lake with a huge CO2 reservoir just waiting for the right trigger to overturn and release its CO2 contents into the atmosphere (USGS report on this hazard). If this happens, it easily kill many more people, as there are around 2M people living nearby...

There are a couple here:

1. The obvious searches often work well. Much to my surprise, a query like [ killer lake ] actually led instantly to Lake Nyos. Sigh. The biggest lesson I pick up from this is that obvious queries work... but only if you have some kind of target in mind. ( [ killer lake ] isn't a query any normal person would do unless they were looking for something like the story behind Lake Nyos.)

2. Checking a known expert site (e.g., USGS.gov) is a great strategy for getting in-depth articles. While it's easy to find lots of articles on Lake Nyos, scholarly articles are best when they come from a known source that does a lot of work in this area.

3. Specialized terms, when you learn them, are great! This is a lesson we've seen a bunch--when you see these special terms (or phrases, such as limnic eruption), use them!

4. Triangulating multiple sources is a requirement. As you see, there are reports of the tsunami being 80 feet... or 80 meters. That's a huge difference. When you're doing research like this, keep looking around--you might find very different data (or points-of-view) around a topic, even things that should be easy to verify.

Take care, if you find yourself next to a temperate, carbonated lake that hasn't turned over recently!