Answer: The case of the Missing Island

Dan Russell • January 12, 2018
SearchReSearch
Republished with permission from SearchReSearch
Answer: The case of the Missing Island Dan Russell
You think a decent-sized island wouldn't get lost...
And yet, somehow, Google Maps seems to have lost an island off the coast of Taveuni, in northern Fiji.
To remind you of the Challenge: I was diving in the Somosomo Strait, between Taveuni and Vanua Levu. In the map below, I've marked both the islands and the strait.


While I was staying at the Nakia Lodge near the northwest corner of Taveuni, I took a lot of photos, including this one: 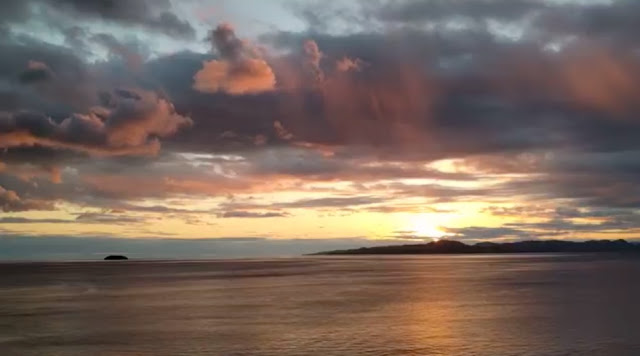 But when you zoom in on the map, this is what I see:

And it doesn't matter if I zoom in with the satellite view... there's nothing there, just a kind of smearing of photo edges! 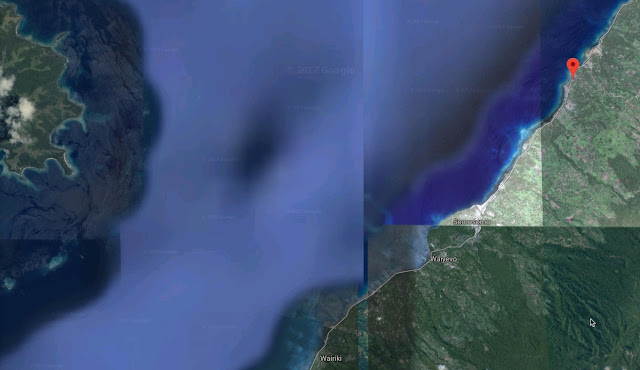 And yet I know, from personal experience, that this small island is basically due west of the small town of Somosomo.
So..
1. What is the name of that mysterious, seemingly missing-in-action island? It's big enough to be on the map, and definitely big enough to show up in the satellite photos... so... what is it?

The first thing I did was to check other map resources. Bing Maps looks like this. 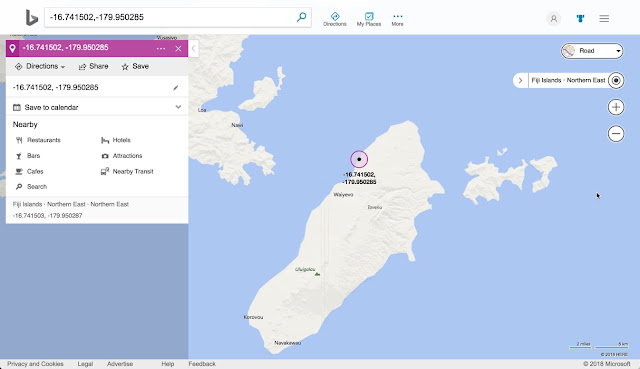 But they have the same issue--there's no island indicated there!

I poked around for a while looking at different kinds of maps. For example, I tried National Geographic, but they hold onto their maps pretty tightly--no freebies there!

but many of these maps are just Google Maps repackaged, and as we know, that doesn't solve the problem.

Using this approach, I DID find a reasonable map of Vanua Levu that shows us an island there, but despite being labeled as a "high resolution" map, it doesn't have enough resolution to tell us the name!

That little dot beneath the "o" in Somosomo isn't a typo or drawing error... It is the island we're looking for!

While I found a lot of maps this way, almost NONE of them were useful for answering our question. Many of them were on similar topics, but not really useful. Time for a new strategy.

Next, I tried the USGS. Did THEY have maps of Fiji? Answer: No.

How about nautical maps? I found a bunch of navigation maps providers, but they all want REAL MONEY to let me look at their maps. If I was to sail in the area, I'd do it... but I wasn't ready to give up just yet.

How about the country of Fiji?? That makes sense... perhaps they have nautical charts for commercial ships and vessels that I could look at.

So I tried the query:

which gives me the very useful search results page: 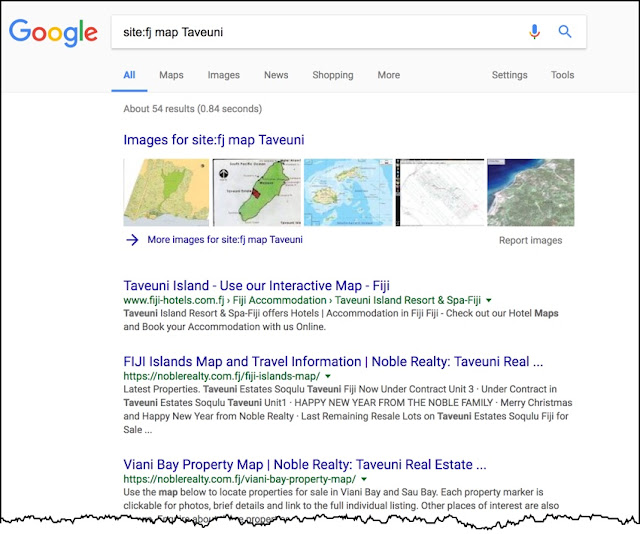 As you can see, there are a bunch of images, and then a number of real estate offerings. 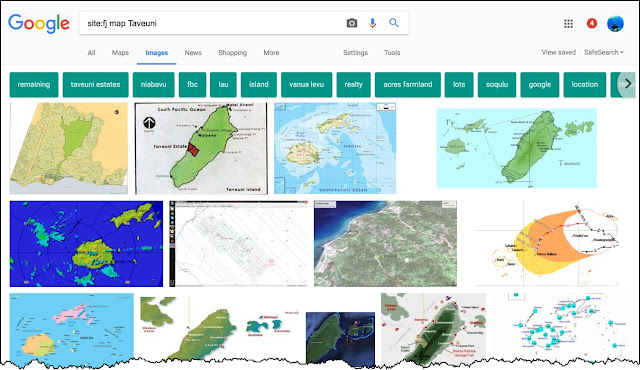 A quick glance tells me that there's an island there, and all of the maps of the real estate agents seem to have it!

Riffling through these images, there are many maps with the mystery island marked...and given a name. Here's a nice clear example from multiple sites:

But as always, let's double check:

This gives us... a surprise! It turns out that there's another area on Fiji called Korolevu... "Korolevu, on the banks of the Sigatoka River, is the birthplace of tourism in Fiji, with the Korolevu Beach Hotel first opening in the 1950s..." Ah... we have to be careful about what we read.

That's nice, but it's not our island! What's going on? I need to be a bit more discriminatory in my query. So...

I modified the query to be:

And I got THIS really useful SERP: 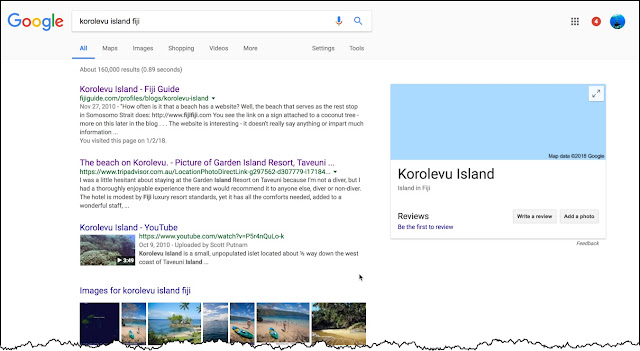 As you can see, it really IS an island (even if the Google Maps insert is showing us a blank ocean).

But now we can look around a bit through these results and find some great validation of this as the island's name. For instance, Geographic.org tells us that this island is Korolevu, at -16.766667, -179.983333 (and when you check that location on Maps, it's clearly the same place, right in the Somosomo Strait).

Interestingly, there's a Wikipedia article on Korolevu Island... in Swedish! Luckily, Google Translate works reasonably well, but we don't learn much more about the place. So all this does is confirms that someone else believes it's a real place.

However, when you find the island For Sale (keep scrolling down the SERP to position 40 or so), you know it's for real. Do a Control-F to find Koro Levu (note that they use a space to separate the terms), and you'll see the ad: 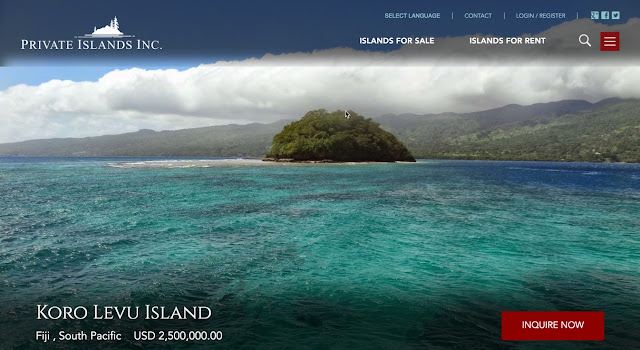 This is clearly the same place. The appearance in this image is a lot like the one in my picture--here they are side-by-side:

So, at last we've got good evidence: The island that's left off of Google (and Bing) maps is called Korolevu (or Koro Levu), and is an uninhabited island located just west of the town of Somosomo.

A couple of images:

This first one is a picture I grabbed of an official Fijian map (the original of which I have not (yet) been able to find online). As you can see, THEY know where Korolevu is. Note also that it's just about perfectly on the 180 degree meridian (that's aka the International Date Line). 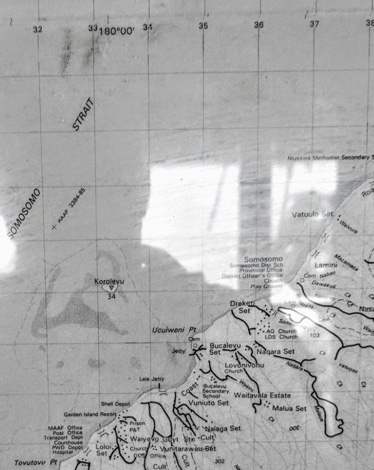 In looking at the comments, I was really impressed by some of the findings.

Remmij used a different strategy: Don't limit yourself to Google and Bing, but look for more photo sites. And... Remmij found another mapping site--Wego.Here.com-- where the photos were (mostly) successfully tiled together to show Korolevu. They clearly have one photo-tile that's not the best choice for that section of Taveuni...


Fred and Jon (the Unknown) did a different smart approach with the query by creating a query with the basics of what they know:

and found Korolevu that way. Sometimes the simplest methods work best!
Luis Miguel found the amazing website by Ulrich Deuschle: his "Generate a Panorama" webtool can basically reproduce a version of the image I took. Here's what was able to create with his tool by setting the camera point to where I was standing, and setting the angle of view to approximately what the camera could see: 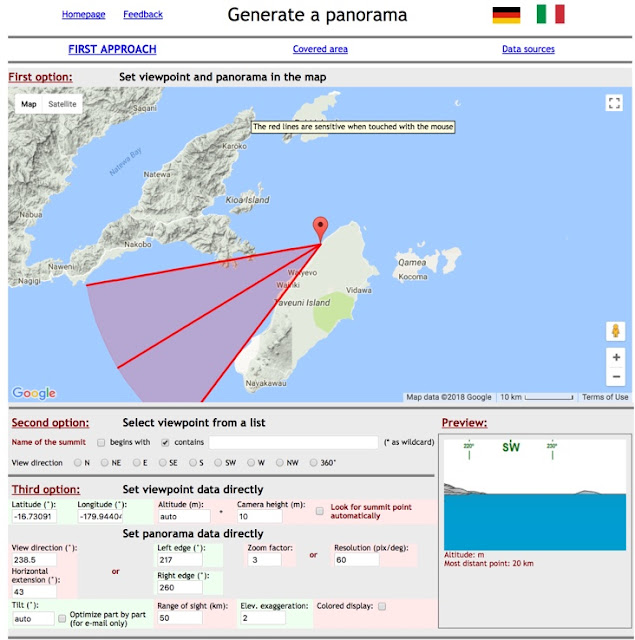 And if you slide the synthesized image a bit to the right, and setting it next to my photo, it looks like this: 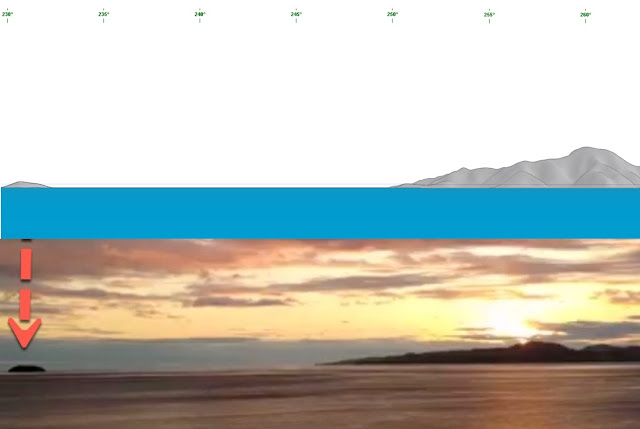 That's a lovely piece of work by Deuschle. (Obviously, he's using data that's NOT from Google. Digging into the data sources of his app, it seems that the data is coming from the NASA Shuttle Radar Topography Mission. This is something worth looking into!)
In his searching, Arthur found the incredibly handy GeoViews website. If you know the name of what you seek, this has a remarkably deep set of image resources. Here is the pic of Koro Levu from GeoView.Info 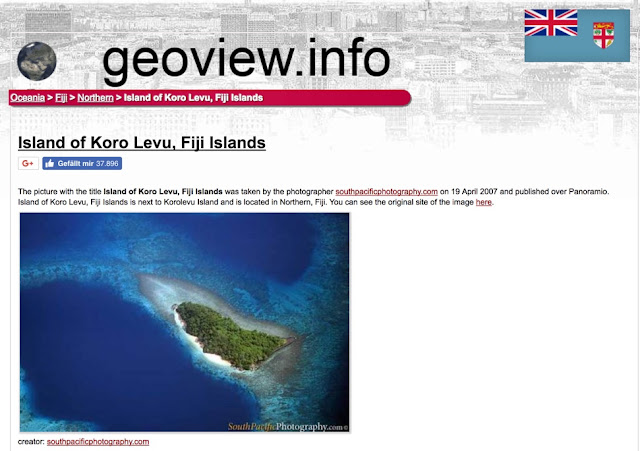 Oddly enough, this fantastic image is originally from Panoramio (taken by SouthPacificPhotography.com). That's odd because Google owns Panoramio, but somehow we haven't managed to connect the Panoramio images with the placenames in Google Maps.

Lots to talk about here, but I'll limit myself to just three points...
1. Just because you didn't find it doesn't mean it's not there! In this example, we weren't able to find the "missing island" because it didn't appear on Google (or Bing) maps. But since I had proof that there really was an island there, I kept digging. Sure enough, other resources have the island. (Moral of this story: If you know something is true, keep digging. Be persistent.)
2. Get multiple--and different!--sources to confirm what you've found. Since the island wasn't on any of the obvious map resources, we had to go to other sources... including local real estate maps. Generally speaking, local resources often contain information that's not in the official content. Of course, you really have to check those sources out, but they often provide great leads and insights. Don't ignore them, but DO double (triple!) check.
3. When you don't know anything, you need a map. In this case, we really needed to find a literal map. But this is true for other kinds of research questions as well. If you're looking for a name of a research area (e.g., "what is the name of a research area that deals with algae?") you might consider finding a "map" of the botanical sciences. Here's one such query that yields a "map" of botany: 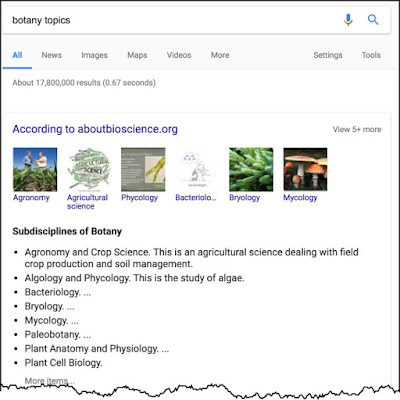 And you quickly learn that the study of algae is called "algology" and "phycology." This is one of the things that a map is good for--not just identifying the thing you're after, but also giving you a bit of an overview of the area. In our Fijiian map example, we were counting on the map showing us what's there, and what the parts are called.
That's a useful skill to have--finding a resource that gives you overview and context.
Search on! (Perhaps with a map!)