Dan Russell • May 17, 2018
SearchReSearch
Republished with permission from SearchReSearch
Answer: Swiss Mysteries Dan Russell
This was supposed to be a fun Challenge...
... but perhaps it was more complex than I'd thought it would be.
Let's go through each, one at a time...

1. When in Switzerland, one naturally eats a lot of chocolate. (I certainly did.) But as I was munching on a bar of Lindt milk chocolate, I realized that the image on the bar of chocolate made no sense to me. WHAT is going on with this cup? Why is the handle so strange? (Did Dali do this illustration for them, or what?)

If you don't know that this is called a "dipper," then it's a lot harder to figure out. Luckily, I knew that word, and doing an Image search for:

pretty quickly finds similar contraptions. Note that I added in the -constellation to get rid of all the "Big Dipper" constellation images. 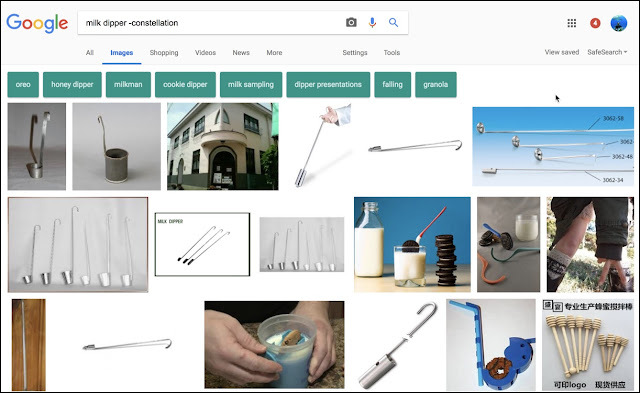 And once you see these "cups with odd handles," you'll learn that they're called dippers.

Unfortunately, I couldn't find an exact match to the white cup shown on the label... but close enough.

By the way, I tried doing a subimage search by cropping the logo to just the cup shown, but that only found more bars of chocolate, much to my surprise. Apparently, there ARE no images of the Lindt white milk dipper cup. (If you find one, let me know!)

Of course, if English isn't your first language (or if you just can't think of what that word might be), remember that you can always use a reverse dictionary to help find synonyms or a word that fits your semantic notion of what you seek.

For instance, you can use the OneLook reverse dictionary function like this: 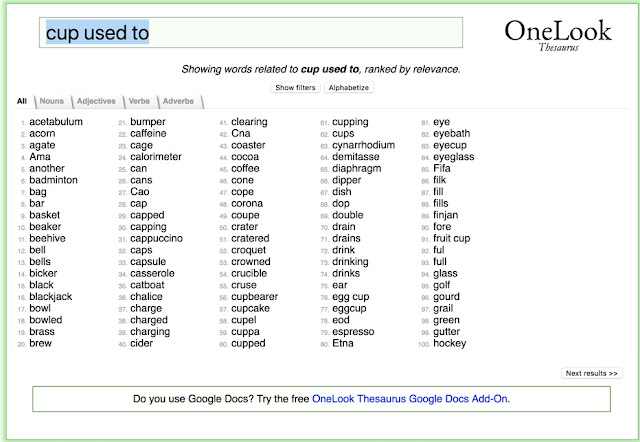 Here I searched for the phrase "cup used to..." (in the sense of "an X cup is used to..."). I don't know quite what X is, but as you can see, a bunch of great terms show up, most of which you can ignore safely. (Acetabulum? Acorn? Agate? Probably not.) But when you get to dipper (number 64), you can do that search with that, and you're on your way.

And you'll learn that the handle of the dipper is intended both to make it simple to hang onto the edge of a milk pail (or bucket), and the angle keeps it tilted away from touching possible contaminating surfaces.


2. One day I walked into a bakery in central Zürich and spying this delectable pastry, I ordered a croissant. I was very surprised when the clerk said, "I'm sorry, we don't have any croissants." But this is what I saw in the display case: 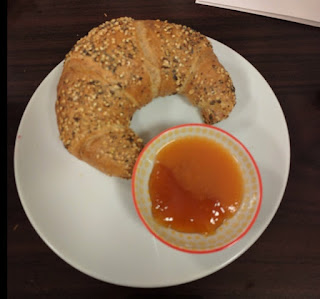 Obviously, I successfully ordered this item. What SHOULD I have called this thing that looks-like-a-croissant? When in Switzerland, what are these called?

This surprised me when I first saw them in Zürich, but a quick search for:

taught me that they're called gipfeli in Switzerland, and as you probably found, there's quite a bit of back-and-forth about whether they're worse (or better) than traditional French croissants. But then again, there's a fair bit of debate about the origins of the croissant as well. When in Switzerland...

3. I understand more German than I speak, but every so often I would hear someone say something odd. One construct I heard that seemed odd always involved people's names. For instance, "Wo ist der Hans?" Can you figure out why that sounds odd to me (a native English speaker), and why the word "der" is in that sentence?

When I did this research, I knew that the word "der" is the definite article, so my first search was for:

which took me to this fascinating article on StackExchange (which is often a very high-quality source for information about technical topics, including language). The nice thing about the StackExchange is that you can read multiple comments with different perspectives. This article points out that using the definite article before a proper name is a southern German-speakers convention. It's a pattern that's clearly used in places like Bavaria, and down south into Switzerland and Austria.

4. Speaking of understanding German... One Saturday evening I was attending a concert at one of the local churches, which are often venue for chamber groups. The director stood up at the beginning of the concert and started speaking in German. "No problem," I thought, "I can understand this!" I listened happily for a couple of minutes until suddenly, everything changed: He was still speaking, and it sounded like German, but I couldn't understand anything! Can you explain what happened in my few minutes of non-understanding?

For this Challenge, I started simply with the query:

where I quickly learned about Swiss German. I guess I'd learned about it before, but I'd never noticed it in a public forum, and read several articles--here's one from Quora--about how it really IS different than standard "High German" (Hochdeutsch). Here's another article about the differences, but the differences are substantial, which explains why it would be unintelligible to a German-speaking neophyte like me.

1. Reading in a topic area after a simple query can often answer questions. Although my initial query about the milk dipper didn't initially answer my question, after skimming through images to find near look-alikes, it became clear what was going on.

2. When searching for a difficult topic, consider the possibility that you don't have the right query terms! In particular, remember to think about using an alternative way to say something. Using a reverse dictionary can often give you insights into other terms. As you saw in the above example, you can suss out other works that you can't think of by trying out phrases you think would be in a plausible definition. (That's what I did with the phrase [ "cup used to"] on OneLook's reverse dictionary.)
Search skills don't make cultural differences vanish, but they definitely make the world more intelligible!