... then there are the ones that are delightfully straightforward, yet surprising. This week's in in that category. Let's take on each of the Challenges one at a time:

1. I found out, much to my surprise, that there are several places where fires have been going on for years and years. How is this possible? Can you find THREE such places on Earth? How long has the oldest fire been a-flame? (No, none of these are volcanoes...)

I started with typing what I thought was the most obvious search:

and found a couple of hits on the topic of "Places that are still on fire."

(Worth nothing that this is unlike Ramón's search, who found that Google autocompleted [ fires that have been burning for years ], my autocompletions were "fires near me" and "fires in California," this is the effect of local searches on autocomplete. I live in a state that has a large wildfire problem, which is why it autocompletes with those suggestions, and not the ones that Ramón, or probably you, see in your search.)

My results found a Gizmodo article on "Five places that are still on fire" listing:

(1) Brennender Berg ("burning mountain," in German), is an area in Germany where a seam of coal has been burning for more than 300 years (since at least 1688). Johann Wolfgang von Goethe (the famous German poet) visited the Brennender Berg in 1770 and commented on it in his journals.

(2) Smoking Hills, Canada (near Franklin Bay), another coal fire that was first noted in 1826. (See Ultima Thule for an impressive set of images.)

(3) Mount Wingen, Burning Mountain is 139 miles north of Sydney, Australia, and is part of the Burning Mountain Nature Reserve. Estimates are that this coal seam has been actively burning between 5,000 and 15,000 years.

(4) Centralia, PA has another coal seam fire that was started by accident in 1962 when locals tried to burning some trash in a pit that was connected to the nearby coal fields. It's still burning (and the town is abandoned).

(5) eMalahleni, South Africa is yet another coal seam fire since at least 1953. Coal mining has been a major industry in the Mpumalanga province (formerly East Transvaal) of South Africa (previously known under its Afrikaans name as "Witbank"), and as you'd expect, an accident in such a place leads to long-lasting fires.

If there are 5 coal seam fires scattered around the world, this made me think there are probably more. But how could I find them?

As I read about each of these 5 "burning places," I realized that many of them used a sentence like this:

" has been burning for more than years"

Realizing that this would be a common sentence, I used the Fill-in-the-blank pattern with this query:

I was hoping to find sentences like "this place has been burning for more than 100 years..." And it worked. Here's the SERP I found: 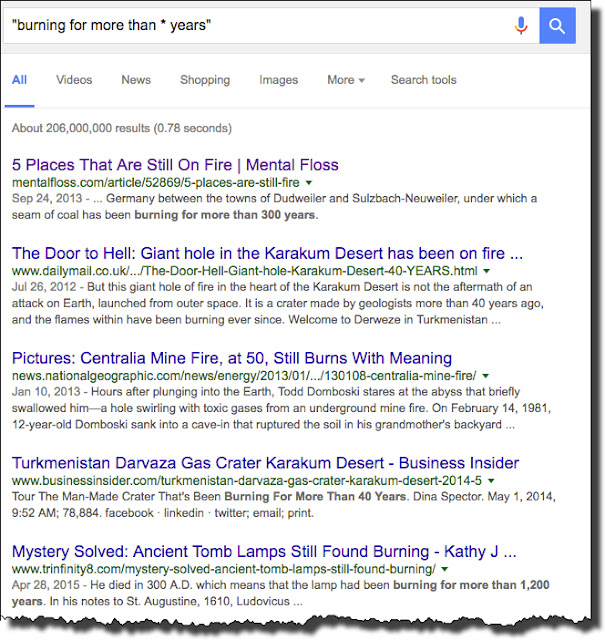 This tactic worked really well! In short order I learned about several other sites, perhaps most notably...

“The Door of Hell” While drilling in 1971 at Derweze, Turkmenistan, geologists discovered a large pocket of methane in a cave that collapsed as they drilled. Although nobody was killed, they decided to set it on fire to handle the outgassing problem, but obviously THAT didn't work out. The Door of Hell is around 69 meters across (roughly 1 football field in size), still on fire, and shows no signs of abating.


There are lots of long-lasting fires like this: Jharia Coal Fields, Jharkand, India (since 1916); Baba Gurgur, Kirkuk, Iraq (approximately 2,000 years); Yanar Dag, Baku, Azerbaijan (since at least the 1950s) and many others.

I honestly had no idea that such fires were so common around the world.

2. A related kind of surprising on-going process is the recent discovery of a natural atomic fission reactor! Apparently, there is at least one place in the world where fission has been taking place without the use of any technology. Where is this place, and how is such a thing even possible? (Don't you need complex reactor buildings, control rooms, and trained operators?) What's the story here?

This wasn't that hard. The query:

leads to several articles to a location in Oklo, Gabon, where a quirk in geology allowed uranium to accumulate in just the right configuration to support a fission reaction. The natural nuclear reactor formed when a uranium-rich mineral deposit became filled with groundwater that acted as a neutron moderator, slowing the neutrons enough to cause other atoms to undergo fission as well. When that happened, a nuclear chain reaction took place. Eventually, heat generated from the nuclear fission caused the groundwater to boil away, which then slowed or stopped the reaction. After cooling of the mineral deposit, the water eventually returned and the reaction restarted, completing a full cycle every 3-hours. The fission reaction cycles continued for hundreds of thousands of years (potentially up to 1 million years) and finally ended when the ever-decreasing fissile materials were eventually used up, and could no longer could sustain a chain reaction. (There's a really nice Scientific American article on this natural reactor. Worth looking at the figures to see how such a thing could take place.)

3. Can you find any other related on-going natural disasters like this? To qualify, they should be processes that run for many years at a time (not just single eruptions or earthquakes).

I found a couple of interesting places by accident during the "fill in the blank" search.

The first was the “Gate to Hell” in Turkey, while it's not a site of active burning, it IS a place where poisonous gases come up from the earth with the ability to kill animals (and people) who linger too long.

And, if you remember, we talked about the "erupting lakes" of Africa in an earlier blog post. Those lakes would definitely qualify as ongoing (or at least, recurring from year-to-year) natural disasters.

This question was pretty open-ended, and it was interesting to see what other people looked for.

As I searched, I realized that some common phrases here would be "annual disaster" or "recurring disaster" and similar. Doing those searches leads to all kinds of repeating disasters (flooding, hurricanes, monsoons, etc)--and then you can start to find annual disaster reports by think tanks (e.g., the Brookings Institute "Year of Recurring Disasters").

The thing about these kinds of disasters is that they're all localized: monsoons flood southeast Asia, hurricanes devastate the southeast United States, fires in Indonesia, volcanoes around the Pacific Rim, river floods along large flood plains. So once you find a recurring disaster (say, flooding along the Mississippi), you can start to check news reports from local sources to get a deeper insight into what's going on.

This week, the "fill in the blank" method turned out to be incredibly useful. The pattern we used:

can be used in many settings--but the principle is always the same. Find common phrases that are central to the concept you seek, and then find ways to turn them into patterns that can be filled in.

Here I let the number of years be the * - but I could have done it another way. For example:

also gives lots of useful results (including several about repeating floods and earthquakes).

This is especially useful when you're investigating a topic area for the first time and trying to get a lay of the land. By letting the * match things that you don't know, you're effectively searching a broader area than you might have imagined.

Another kind of repeating disaster you might not have thought about would be revealed by this query:

It's a slightly scary proposition--that there are diseases and plagues that recur, but this is definitely within the disaster scenario. And using the * fill-in-the-blank search pattern is one way to discover these kinds of events that you don't know about.