Answer: Search in a world of changing names?

This flower has changed names...

.. which is fairly common thing to do. People generally call this a shooting star, although I've always known this particular flower as Dodecatheon hendersonii, a name that rolls off the tongue (try saying it aloud!) and has a nice reference to the 12 gods ("dodecatheon") of the Olympian pantheon. It's also a fanciful name given by Pliny to a primrose purportedly protected by the gods.

But the name was changed to reflect newer phylogenetic information, which is only the right thing to do. Goodbye Dodecatheon, hello Primula, where it rejoins the rest of the primrose family.

This led me to frame these three name-changing Challenges. Can you figure out a search strategy for each?

1. Speaking of Mark Twain, did he use any other names besides Mark Twain for writing? (If so, what are they?)

We could do the Wikipedia search (which actually is a pretty good article). OR you could do a search like this, spelling out the variations on "pen name":

both of which will lead you to his aliases. But I wanted to find only his authorial names (that is, ones under which he published books or articles).

For something like that, I turn to the Library Of Congress online catalog, knowing full well that the catalog entry would also show me his pseudonyms.

As you can see, the LOC shows Quintus Curtius Snodgrass, Louis de Conte, and Jean François Alden as other names that Clemens used as well.

That's a great find. BUT, as SRS Regular Reader Art showed us, it's often useful to look at multiple sources, each with a slightly different perspective. With his query of [ Mark Twain "other names" ] he found a few additional resources, including this one from World History Edu about Mark Twain. From that page he learned that Twain also wrote as “Josh” and as “Thomas Jefferson Snodgrass.” But the first time he used a pen name was in the early 1850s when he signed a sketch in his brother’s newspaper “W. Epaminondas Adrastus Perkins.”

Of course I checked, and sure enough, I found that Clemens had also written with these other names. So it's clear we need to dig deeper.

Pro tip: If you look at the Wikipedia entry for Mark Twain, near the bottom you'll see some expandable sections including one called "Authority Control." I looks like this:

If you click on the [show] button on the far right, it will expand and show you multiple authority control links:

The first row (General) are links to different "Authority Control" web pages. If you click on WorldCat, you'll land on the OCLC WorldCat authority control page for Mark Twain / S. L. Clemens. Looks like this:

(What is WorldCat? It's a meta-library catalog (technically, a "union catalog") that includes the catalogs of over 15K libraries worldwide. As you can imagine, like all libraries, they need to have an authority control system so you can find all of the works by the same writer, no matter if they changed names or write in a different writing systems. This get complicated when authors come from another orthography. For example, see the WorldCat record for Lao Tzu.)

Scroll down a bit on this page and you'll find the complete list of alternative names that Clemens used: 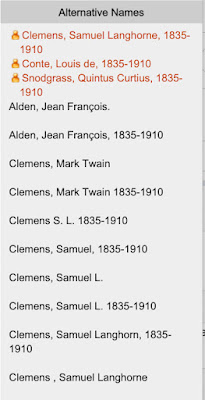 This list goes on for quite a while. When you think about it, that makes sense because the works of Mark Twain also appear in other orthographies such as Chinese, Korean, Arabic, Hebrew, Russian, etc. Farther down this list you'll find: 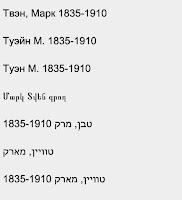 As I read through the list, I'd heard of most of his pseudonyms (as seen above), but was surprised to see the name Jean François Alden on the list. Is that really another pen name?

So, Mark Twain (Samuel Clemens) wrote the book, but had a fictional memoir writer (de Contes) whose work was (fictionally) translated by Jean François Alden. Is that a pen name? Or is Alden just another character in a book by Twain? I can see it either way, and apparently, so can the Library of Congress, since they also listed Alden in their authority record!

Have we found ALL of the pen names of Twain/Clemens/Josh/Snodgrass? It's hard to know because Twain was such a prolific writer that a complete compendium of his work is nearly impossible to compile. He was an active writer and wrote copiously, often in obscure newspapers, sometimes changing pseudonyms at the drop of a hat. Researchers has recently rediscovered some of his works in 2015. (See this article from the Guardian about the Mark Twain project at UC Berkeley, where they KEEP finding more articles!)

So, for Clemens we have Quintius Curtius Snodgrass, Thomas Jefferson Snodgrass, Josh, W. Epaminondas Adrastus Perkins, Sieur Louis de Conte, and Jean François Alden. But I have no doubt that we'll find more pseudonyms as bibliophiles continue to find more of his writings.

2. You know that Istanbul was once known as Constantinople (there's even a song about that!), but what was Saint Petersburg, Russia (that is, the city of Санкт-Петербург) called before its current name?

I began with the simplest possible search: [ Constantinople ] and read a few pages (including the inevitable Wikipedia page) where I learned that Constantinople appears in many orthographies, thus, in Greek: Κωνσταντινούπολις (Kōnstantinoupolis), Latin: Constantinopolis; Ottoman Turkish: قسطنطينيه‎, romanized as: Ḳosṭanṭīnīye).

In 657 B.C., the ruler Byzas from the Greek city of Megara founded a settlement on the western side of the Strait of Bosporus, which linked the Black Sea with the Mediterranean. Thanks to the pristine natural harbor, his self-named city--Byzantium (Ancient Greek: Βυζάντιον, Byzántion)--grew into a thriving port city. It kept that name until 330 CE when Constantine consecrated the empire's new capital there as New Rome (Nova Roma), a city which would one day bear his name. Constantinople would become the economic and cultural hub of region. Its importance would take on new meaning with Alaric's invasion of Rome in 410 CE and the eventual fall of (old) Rome to Odoacer in 476 CE.

In this case, my search strategy was simple: begin with the obvious search, and then read 5 or 6 different sources (in particular, ones that are NOT duplicates of each other), and look for the points of agreement. I found these earlier names (Byzántion and Nova Roma) in multiple places with links to various histories of Turkey and Istanbul, so I'm pretty confident that these are the earlier names.

Applying the same search technique to St. Petersburg tells us that it was founded on May 16, 1703, at the mouth of the Neva, not far from Nien at the site of a captured Swedish fortress by Tsar Peter I (aka Peter the Great). Later, the name was changed to Petrograd (1914–1924) and then Leningrad (1924–1991), before reverting to St. Petersburg in 1992. (For reference, I used the Russian St. Petersburg Wikipedia page with Google Translation.)

3. What were projected moving images (what we would now label a "movie") called before 1900?

For this I took a historic approach with a search for:

and landed on the Wikipedia page for the History of Film along with its related articles History of Film Technology, Precursors of Film. While around 1659 the magic lantern was developed by Christiaan Huygens to project still images, it took a while to get the tech working for moving images. But I will leave you to read about the detailed history. (Fascination warning: You might go into the rabbithole of old film mechanisms and never emerge.)

images. We could spend many happy hours reading about the early motion image systems, but here's a list of the ones I found: Bioscop, Zoetrope, Théâtre Optique, Phenakistiscope, Kinetoscope, Zoopraxiscope, Praxinoscope, etc.

And, of course, my favorite image from this era (not a projected image, but the first motion capture):

1. An authority file has the "master record" of an author's names, pen names, pseudonyms, and spellings in other languages. WorldCat and the LOC have the best authority file, but they're still a little wonky to use. (I'll write another article soon about how to use them effectively.)

2. Even so, it's worth looking around for other pseudonyms. The authority files might not be conclusive. (As we found with "Josh" as a pen name for Twain.)

3. When searching in other orthographies (e.g., Russian), it's useful to consult multiple sources, including those in the original language. Thank heavens for Google Translate. For dataful queries like this, it's a fantastic resource.